Federal Case: Richmond club's strategy to take “semi” out of semi-private by 9/12

As reported in the October issue of Home On The Course, our free monthly newsletter (sign up at top of page and I will personally send you a copy), the Federal Club in Glen Allen, VA, started off as a private golf club, reverted during bankruptcy proceedings to a public golf course, and now plans to revert back to private club status in September 2012, according to the new owner, Chris Gilman, a Richmond-area developer who purchased the golf club and a few dozen adjacent lots for just $2.6 million at a bank auction earlier this year.

About 30 homes are built and occupied in Mountain Run, the surrounding community’s name, giving the neighborhood an in-process but less-than-vacant feel.  As we reported, Gilman does not seem in a hurry to sell the available lots on the cheap, preferring to let the market come back a bit first.  The strategy, on the face of it, is commendable in that it demonstrates to potential purchasers and golf club members that the developer has deep pockets, a good message in these fragile financial times.  Yet the quicker Mountain Run fills out, the faster Gilman and The Federal Club can count on an embedded base of members in the hills about 40 minutes northwest of the center of Richmond. 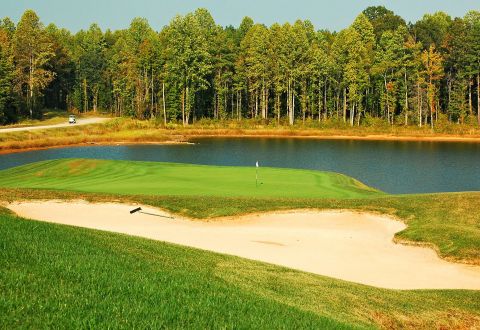 Federal Club is holding its grand opening celebration on November 13, even though the golf course did not close for more than a few days during the transition from the former owners to the lending bank and then to the current owners.  For anyone who might be in the north Richmond area that weekend, the $95 fee is a bargain that includes golf fee and cart, box lunch, oyster roast, pig pickin’ and “open bar.” (I think they mean “cash bar” but, if not, they can probably count on an overflowing tee sheet that day.)  Perhaps this is another clever strategy by the owners –- get everyone lubricated and then entice them with a reasonable membership proposition.  For the moment, full family membership is just $4,000 (discounted from $6,000) or you can pay $2,000 now and $4,000 the day Federal Club reverts to private status.  Dues are $350 for full family membership.

Membership at Federal Club comes with a nice extra as well – privileges at Spring Creek Golf Club in Gordonsville, VA, about 45 miles away and Golf Digest’s “best new public course under $75” in 2007.  Designed by Ed Carton, who apprenticed with Tom Fazio for half a dozen years before striking out on his own, Spring Creek features some of those recognizable large Fazio bunkers but also unique touches, such as the 16th hole, a short par 4 known as the “Fortress” for the rock walls that guard the back of the green and the deep bunker that guards the front (the hole also features a split fairway).

Based on my round at The Federal Club a few weeks ago with my friend Andy, a professor at the University of Richmond, celebrants at the grand (re)opening would best stay away from the open bar until after the round.  The Arnold Palmer/Ed Seay golf course is a sobering experience, with all the markings of a carefully designed and challenging private layout, which is reflected in the course and slope ratings –- 6,549 yards from the white tees with a rating of 72.1 and slope of 141.  The course was in terrific condition, and as management drives toward private status once again, it should only get better.

Below are additional samples of the appealing and challenging holes at The Federal Club golf course (apologies for lack of hole identification; there were no tee box markers or yardage book).  If you would like more information about Federal Club and the community of Mountain Run, please contact me. 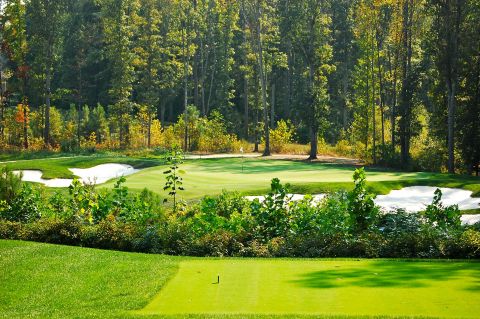 More in this category: « Lease on Life: New owner gives Olde Mill Resort and golf course injection for growth A weekend at Wintergreen »
back to top
Back to Top