Kinloch: Best golf course you may not know
Wednesday, October 6, 2010

Kinloch: Best golf course you may not know

Written by  Larry Gavrich
Rate this article
(0 votes)
Just west of Richmond, VA, Kinloch is the only golf community I’ve encountered in which the golf club is gated and the sophisticated surrounding neighborhood is not.  After playing the golf course, that almost seems fitting -- it is that good.


Most golf raters believe that Kinloch Golf Club is easily the best golf course in the state of Virginia, its chief competition for the title the ultra-exclusive Robert Trent Jones Club in Manassas. Golf Digest ranks Kinloch in the top 50 of all golf courses nationwide,

Kinloch was originally intended to be a public golf course but the landscape dictated the design, and its eventual status.
and GolfWorld earlier this year went so far as to rate it the 4th best private club in the U.S., behind only Oak Hill in Rochester, NY, Augusta National and Pine Valley (consider for a moment every other great golf club not in that group, such as Oakmont, Cypress, Shinnecock and Winged Foot).  And GolfWorld assigned Kinloch top rankings in the categories of “condition” (no quibbles given my round there), practice facility (best short game area I’ve encountered), and a perfect rating for “service.” (One example:  Every other tee box offered crates of ice-cold bottles of water.)  Kinloch’s attention to detail on and off the course is impeccable.

You will have to wangle an introduction to play the member-owned golf course or get to know one of its members well, but although exclusive, the club is by no means stuffy.  The two members I had the good fortune to be matched with reminded me of the many guys I’ve met at daily fee courses over the years, which is to say these two were funny, unpretentious and inoffensively salty in their language. (They apologized a few times but I took no offense, pleased they felt comfortable enough with me to be themselves.)  They had beer personalities with the champagne pockets necessary to join a club like Kinloch.  (Note:  The club does not publish its member fees but count on them being somewhat above average.)  I also played with Ian Sikes, Kinloch’s former golf professional who is now in charge of membership recruitment activities. 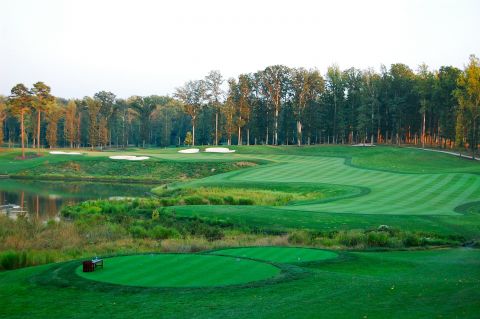 A well-played tee shot to the right side of the fairway at Kinloch's 16th hole, a long par 4, will leave the best angle into a well-protected green.

Actually, Kinloch was originally conceived as a public golf club in the 1990s when local businessman C.B. Robertson, who owned the land on which the golf course and real estate sits, was encouraging development of office parks nearby (also on his land).  Robertson thought a golf club would be a lure for companies to relocate to Manakin-Sabot.  The companies did come, and today the national headquarters of Car Max and Capital One, as well as dozens of law firms and insurance companies, populate the nearby office parks.

But somewhere along the line, plans for the public golf course were scotched.

Amateur golf legend Vinny Giles had been asked to conceive the course, and he invited Lester George, a little known but well respected architect, to join him in the task. Giles and George, who last year debuted the terrific Ballyhack golf course in Roanoke, developed a layout and vision for a club that they, Robertson and other partners in the venture considered too special for compromise to accommodate the heavy play and pounding the course would take from daily fee golfers.

When it opened in 2001, Kinloch was named the best new private course in the nation by Golf Digest.  After a recent round there, I understand.  With only a few spots of turf browned from the severe summer drought in Virginia, conditions were stellar, the more remarkable for the bent grass that runs from fairway to green at Kinloch and requires special tending in the south’s summer heat.  I have not putted on better greens in recent years, easy for me to say since I made four putts from beyond 25 feet, which is three or four more than my typical round.  I couldn’t wait to get the putter in my hands on each hole at Kinloch.  (Note:  A rarity these days, Kinloch maintains its own caddy program.  Props to my caddy Dan who helped me read some of those long putts.) 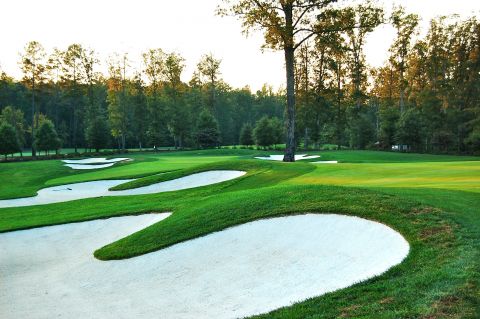 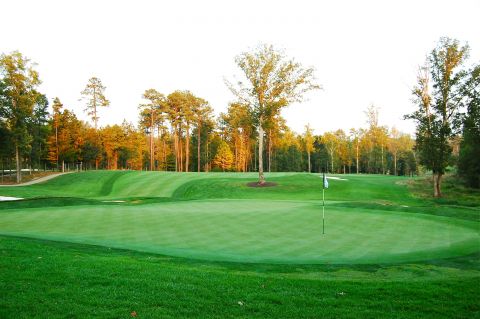 A lone tree appears to be dead center in the fairway at Kinloch's short par 4 15th hole, but actually is in the left-hand rough.  The safe route is around to the right but daring long hitters will have a go at a fade around the tree, with the lure of a two-putt birdie, or better.

The George & Giles layout is filled with all kinds of traps, and not just the sandy kind; the grip-it-and-rip-it sort will find only a few holes with fairways wide enough to forgive overly aggressive plays.  The strategy maven, on the other hand, will delight in the choices among the multiple routings on some of the longer holes, including the 9th, where the designers conspired to offer head-scratching choices for the first and second shots on the par 5 (yardage ranges from 540 to 586).  Assuming a good drive to one of the two fairways –- left of the stream is safer, but right of it offers a much better angle for shot number two –- the lay-up must negotiate a “palisade,” or bluff, in the middle of the fairway about 80 yards from the biggest green on the golf course.  Those who find the safety of the fairway within short iron range of the green will have a good birdie opportunity; others will scramble for par or bogey. 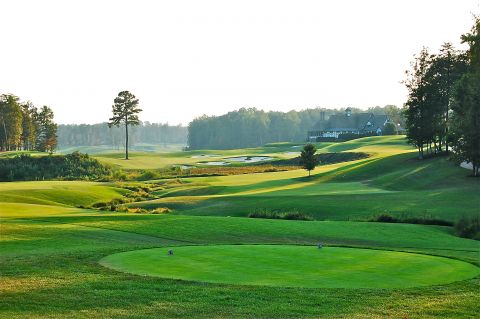 The par 5 9th at Kinloch presents two options from the tee box; left is safer but demands a challenging lay-up to the fairway at upper right.  A play down the narrower right side, assuming it winds up on the short grass, makes a lay-up to the mown area short and left of the green (below the single tree) an alternate possibility.

I would be hard pressed to identify a breather hole at Kinloch or one that would not rank among the best of the 18 at virtually any other golf course.  I especially loved the short par 4s at Kinloch.  As I get older and my distance off the tee shortens, I look forward to 300-yard two shotters like the 15th, where the choice is between driver and something like a 5-iron.  A tall single pine tree on the left edge of the snaky fairway lies directly between tee box and green, about 200 yards from the tee.  Hit a perfect fade on the driver just to the left of the tree and the second shot will be a routine chip, or possibly even a putt.  An imperfect shot too far left of the tree brings gnarly rough and a small piece of wetlands area into play.  The safe play is to aim right of the tree with a mid- or long-iron, catch a bounce toward the green on the slightly tilted fairway, and have a solid chance at birdie with a wedge in. I went that way and was happy with my two-putt par.

The equally short 4th hole provides some early-round temptation that is hard to resist.  At 310 yards downhill from the tee, the par 4 plays even shorter than the 15th.  A stream runs from the midpoint of the split fairway to alongside the right edge of the green.  The aggressive play is over the stream to the left half of the fairway, but the three bunkers that protect the far left side are there to both prevent an errant tee shot from the woods beyond and to punish the impertinence of such a risky tee ball.  A conservative play down the right side provides for a short iron, albeit over that greenside creek, the green protected as well by a small deep bunker short and a big one just beyond. 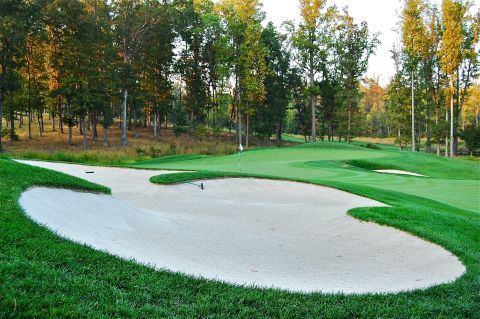 The par 5s at Kinloch are a treat, none more so than #11, where a split fairway with a stream running down its middle dares you to drive down the right side, leaving a long iron or wood second shot to the green.  The green, however, is not deep, and greenside bunkers at front and left argue for a more conservative play down the left side and a lay-up for the second shot.

Kinloch is a unique experience, not least of all because it offers a real 19th hole, a par three over water where many a bet has been settled since the course opened a decade ago.  (The customary 19th hole in the clubhouse is as you would expect, warm and inviting and festooned with plenty of dark wood and leather.)  The 19th plays from 152 to 184 yards, all carry and to a wide green protected by bunkers in front, at left and behind.  The Tudor-style clubhouse sits just off to the right and a couple of hundred yards beyond the green are a few large homes, the only structures I saw during the round.  (More about Kinloch real estate in the coming days.)

You get the picture (literally) about Kinloch from the accompanying photos.  You may not have heard much about the course but then you would not have heard much of Augusta National either if it weren’t for a certain golf tournament the first weekend of every April.  Kinloch may get a little bump in publicity next year when it hosts the U.S. Senior Amateur and when the sentimental favorite tees it up, a 68-year old local boy who knows Kinloch backward and forwards -- Marvin “Vinny” Giles.  For those angling for an invite to Kinloch there should be plenty of members in the gallery during the event, cheering for Giles.  It will also be a great time to check out the real estate in the surrounding community, which I will cover here in the next few days.  Contact me and I will be pleased to arrange for you to meet with the developer of the property. 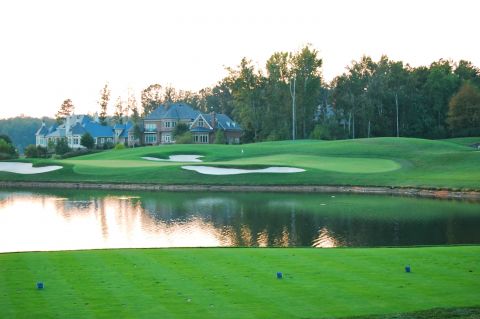 A true 19th hole at Kinloch where many a match has been settled.  The homes in the adjacent neighborhood are the only ones you see from the golf course.

More in this category: « The Kinloch community: Surrounded by golfing options, and more Review: Creighton Farms, Aldie, VA »
back to top
Back to Top