This is the second and final part of our review of Bay Creek Resort & Club in Cape Charles, VA.  Part one is available by clicking here.

The cart path on Bay Creek's Jack Nicklaus course moves through a replica of a lighthouse on the resort's Arnold Palmer course.

Retirees looking for consistently warm days in winter will head south on Highway 13 right past Bay Creek and keep going about 10 hours more.  But anyone who can handle, say, the four seasons of Asheville, NC, will be quite comfortable in Cape Charles, which is one degree warmer in the dead of winter than is Asheville (average Cape Charles high temperature in January is 47 degrees Fahrenheit) and just two degrees warmer in July (86 degrees average).  Bay Creek’s golf courses are open all winter, and the pro shop has a nice selection of sweaters, windbreakers and everything else you might need to play in the 40s.  Those used to northern winters should not find this part of the south particularly daunting in January or overly oppressive in July.

If a community were judged on its flora alone, Bay Creek would be The Cliffs Communities, Kiawah Island Resort and Boca Raton Club all rolled into one.  Developer Dickie Foster’s obsession with landscaping shows in the sheer

numbers of rose bushes, azaleas and other plantings that festoon the golf community.  Indeed, Bay Creek predicts a million roses will bloom this year, many of them lining streams and ponds on the golf courses.  Off both sides of a wooden bridge that leads to the 3rd green on the Palmer course, for example, huge wooden planters hold multiple rose bushes.  On the 18th hole, a stream that crosses the fairway at a strategic point is literally hidden from view by a solid row of rose bushes that look as if they would stop a too-strong tee shot (but don’t test the theory; lay up).

Although Foster does not play golf, he is attached to the seat of his golf cart, members say, touring the property on an almost-daily basis, filling the visual gaps in the landscape with rose bushes dancing in his head.  Real estate sales director Linda Buskey told me that Foster once called her excitedly to say that he had scored a great deal on truckloads of rose bushes.

In all, according to Buskey, more than 50,000 rose, azalea and hydrangea plants are positioned throughout the Bay Creek property.

Foster surely hopes the empty lots at Bay Creek will fill in as quickly as the rose beds.  Sales, which never really

hit a growth spurt in the 2000 to 2005 time period, ground almost to a halt after the recession started.  With 2,500 owners expected at full build out, Bay Creek has just 700 owners today, slightly more than 25%.  That is likely why Foster took on equity partners Kaiser Financial in 2008 to help fund the next phases of development at Bay Creek.  Except for empty plots out near the bay, no signs of a cash drain at Bay Creek are visible.  Dozens of workers were out tending to the course during my recent visit; I watched a line of 20 of them with shovels on one of the practice greens scooping up the plugs generated by the aeration machines.  The clubhouse and pro shop, which will be supplemented in a few years by a larger building adjacent to the club’s current parking lot, were well staffed.

The golf courses, which are managed by the Billy Casper Company and have been “semi-private” since they opened, won’t go private until membership reaches 350.  They are about halfway there.  Each day, the club closes one course to outside play for the exclusive benefit of members, a creative and smart touch.  Initiation fees are not cheap, at $39,000, but that is a “deposit,” fully refundable at resignation after enough new members join (four for every one member on the refund list).  A special non-refundable “masters” membership is also available for $5,000.  Dues for a golfing couple run $310 per month on both plans.  For those who live 100 miles from the community, dues are about $100 less per month.

Geographic location drives real estate pricing more than designer golf does, and Bay Creek offers reasonably priced real estate consistent with its off-the-beaten-path location.  Three-bedroom condos in the attractively designed Fairways section along the 11th fairway of the Palmer course are spacious and fine as weekend or even summer getaways; they are priced beginning at just $250,000.  Other, larger units in The Fairways top out at $350,000, the price at which smaller single-family homes begin in a section called The Hollies.  Lots with water views seem especially reasonable at Bay Creek; one home site that looks out along the scenic 2nd hole on the Palmer course and out to the bay beyond is priced at $200,000. I’ve seen comparable water view lots in other communities priced at double or triple that.  Construction costs in Bay Creek typically run at $200 per square foot, which includes hardi-plank exteriors, hardwood floors and granite counters.

With all that the Bay Creek Resort & Club has going for it -– its reasonable prices, proximity to densely populated

areas in the middle-Atlantic states, and far but yet so near access to Norfolk, VA –- why isn’t it as well known as some of its eastern seaboard competitors, like Landfall (Wilmington), The Landings (Savannah), and St. James Plantation (Southport, NC)?  Unlike those others, Bay Creek is a resort as well as a residential community, and it is a challenge to convince potential year round residents that the vacationers won’t impose on their golf courses and their lifestyles.  If Bay Creek can find a way to attract and appeal to both its permanent and transient residents, it stands a good chance of being mentioned in the same breath as its more southerly competitors.  A slightly more aggressive marketing approach could help New England and metro New York golfers understand they have a viable alternative to the more honky tonk Myrtle Beach golf vacation.

In early May, one million rosebuds, azaleas and other plantings will explode with color at Bay Creek.  The developer and earliest residents have been waiting 10 years for real estate sales in the community to blossom.  With a revitalized market and some of the fairest prices on the east coast, there is no reason why Bay Creek cannot begin to reap what it has sown.

Bay Creek Resort & Club, Cape Charles, VA.  Web:  www.baycreek.net.  For more information or to arrange a visit, contact us by clicking on the "Contact Us" tab at the top of the page. 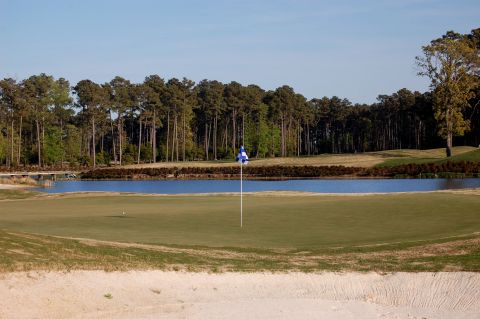 The finishing hole on the Palmer course demands three precise shots to reach the green -- or two, if your guts and your placement off the tee are up to it.

More in this category: « Bay Creek's Nicklaus course a fair bear Coming Up Roses: With plenty going for it, Bay Creek a late bloomer »
back to top
Back to Top