Bankruptcy proceedings related to the Cliffs Communities should be completed late this summer, at which time the consortium of new owners will take over officially. In the meantime, the Carlile Group, SunTX Urbana and Arendale Holdings are working hard to convince current members and residents that the sprawling group of communities’ future is bright, even though the consortium does not yet technically own the amenities or the real estate. (Technically not, but the bankruptcy court has blessed the purchase.) If a recent presentation of new membership programs is any indication, the communication job will be complicated.

Golf Community Reviews obtained access to the video of a 90-minute meeting hosted by the new owners for current members earlier this month. The new owners used dozens of slides to sort through all the various

The new top initiation fee at The Cliffs will be $50,000; no-greens-fee access to all the clubs is available for a dues rate of just over $10,000 annually.
options current and future members will face in deciding what level of membership to choose under the new regime. It is difficult to know how the plans were received since no questions were taken from the floor; however, the owners did a good job of answering questions –- some of them tough -- that had been submitted by members before the meeting, and we heard only fairly robust applause as the meeting ended.

Here is the essence of the new member plan offerings:

New members at The Cliffs will pay an initiation fee of $50,000. (At one point, The Cliffs charged over $125,000.) These new memberships are not deposits, as previous memberships were (see below). Each membership will be tied to the “home” course in the community where the member owns property.

The amount of dues a Cliffs member chooses to pay will determine the level of access to the other Cliffs golf clubs. The more one pays, obviously, the more courses they can play. The “Home” club membership provides for unlimited play year round at the home course and a $65 per round fee at each of the other courses. Dues for the Home plan are $9,340 per year. For those who want to retain free and easy access to all the courses, with no payment of green fees, the annual dues will be $10,380. Non-resident members –- those who own property but reside more than 125 miles from any Cliffs golf club –- pay dues of $8,300 per year but must pay green fees of $65 per round at both their home and the other clubs. On a comparative basis, that seems a bit high, a possible encouragement for those property owners to consider making The Cliffs their primary place of residence. For those who play a limited number of rounds of golf annually, a Sports membership is available. It provides 10 rounds per year at the Home club and up to 5 rounds at each of the other clubs; when Gary Player’s Mountain Park course is complete, that would mean a total of 40 rounds annually. Dues for the Sports package are $5,280 per year. 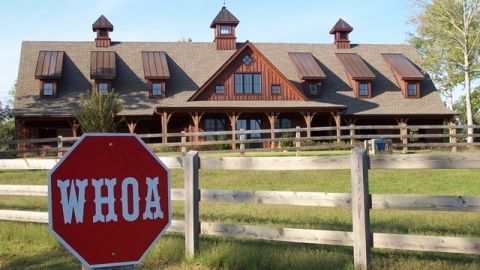 The Cliffs equestrian center did not come up for discussion during the recent members meeting.

Property owners who are not club members will be granted "amnesty" and be able to join the club.
who opted not to become club members at the time of purchase. They will be required to submit a $5,000 transfer fee payment, as well as the $50,000 initiation fee (non-refundable) for full golf membership. Members with multiple properties and multiple memberships will be permitted to “downgrade” their additional memberships to “social” status and, therefore, pay reduced dues for those memberships. (Why, you might ask, would someone own multiple properties and memberships in a single community? Remember those halcyon days of speculation when many believed that what goes up must continue to go up?)

The new owners indicated to the club members in attendance that completion of the Gary Player designed Mountain Park course is high on their priority list. The motivation to finish Mountain Park, one resident told us, is that 240 lots have been sold there and most of the owners are paying greens fees only, no dues. When the course is completed, then they start paying dues.  The new owners declined to discuss the future of the Tiger Woods course at High Carolina, citing the bankruptcy process as the reason. But your editor is under no such embargo: Expect that course to be built about the time Tiger wins his 18th major -– unless a resort owner or hotel chain desperate for publicity purchases High Carolina from willing Cliffs owners.

One of the prepared questions referred to a perceived schism between “note holders” –- those who famously loaned developer Jim Anthony $64 million in an ill-starred attempt to keep the developments afloat -– and the non-note holders, some who felt ill-treated in the wake of Anthony’s default. The response from the podium was, as you might expect, that the new owners intend to build a community that will benefit all its residents and members, whether they held a piece of the note or not.

The presentation was long on content if a little short on style (densely designed slides, presenters that read some of those slides line by line, no questions from the audience). The owners clearly understand

The bankruptcy has been a blow to the ego for many wealthy owners. The new owners should continue to communicate, and show some humility, until success is assured.
that those members who paid as much as $125,000 in initiation fees are out a substantial amount of money. Note holders will be repaid their loans to Jim Anthony over 20 years, not the original seven they were promised (and they are unlikely to receive any interest on those loans).

For Cliffs residents and golf club members, albeit a wealthy group, the bankruptcy has been a humbling experience. The purchase of a multi-million dollar residence and payment of $125,000 initiation fees in a community that, at least on paper, went belly up, has been a blow to the ego, especially for folks who, in their prior business lives, were firmly in control and probably made good decisions. This is why it seemed odd that at the recent members meeting, in response to a prepared question, Hugh Connerty, the CEO of Arendale, felt compelled to mention to the group of members at the Greenville meeting that, “I belong to 11 clubs…” He later referenced his recent access to the ultra exclusive Cypress Point, a club that mere mortals -– and many Cliffs members –- will never play. After watching Jim Anthony go blind and tone deaf to real estate market realities and his residents' concerns, the new team should understand the importance of humility, at least until success seems assured.

More in this category: « The kindness of neighbors Cliffs meeting hints at new membership plan »
back to top
Back to Top