Pros Know: Nationwide Tour tees it up at short but tricky Thornblade Club
Saturday, May 19, 2012

Pros Know: Nationwide Tour tees it up at short but tricky Thornblade Club

I probably don’t remind readers enough that it is possible to have a deeply satisfying golfing retirement in a community that was not strictly planned as a golf community.  In almost all such cases, especially for golf communities that do not maintain a guarded security gate, homeowner costs are cheaper in a non-planned development than in one whose golf course and surrounding real estate were set up together.  Often, even though they "feel" like planned golf communities, there are no homeowner dues at all.

The Thornblade Club in Greer, SC, and its surrounding neighborhood are fine examples of how two separate components can appear to live in perfect harmony.  The highly rated Tom Fazio golf course, renovated exquisitely a few years ago, is at the core of the community, literally and figuratively.  The wide range of home styles, mostly brick, radiate around the layout, which features a number of funneled fairways and Fazio’s customary cloverleaf bunkers.  Some of the fairways, especially the 18th, are half a funnel, which is to say sloped on one side with the potential for slipping off the other into danger if your tee shot is not well placed.  The course, which is open year round, is always in excellent condition and a fair challenge for all manners of players…

…except, perhaps, the professionals, who now tee it up at Thornblade this time of the year at the BMW Charity tournament on the Nationwide Tour -- and those who practice there.  (Former U.S. Open champ Lucas Glover learned the game at Thornblade, and the Haas family owns a home beside one green (it's owned by patriarch Jay).  Yesterday, current BMW event leader Cameron Percy shot a 62 on the 6,688-yard layout.  Still, the fact that the leader is “only” 14 under par on a course that plays as short as any on the professional tours is testimony that Thornblade is no pussycat.  A 66 was the second-lowest score among the other leaders yesterday. 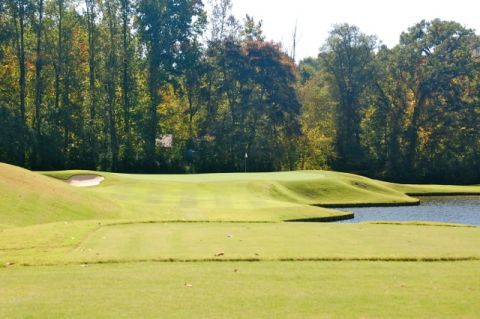 A stream runs through Thornblade, but a pond can wreck havoc too.

Greer is anchored by the enormous operations of BMW of North America.  The plant and offices and all the auxiliary businesses that support them has had a stabilizing economic effect on the area.  The Greenville area is one of the most under-appreciated locations for retirees looking for an active and golf-oriented lifestyle.  The city is as diverse as the more popular Asheville, NC, with real estate prices comparably lower.   For those looking for more elaborate and somewhat more rural golf communities, but still within striking distance of Greenville, two of The Cliffs Communities are within a half hour -– Cliffs Valley and Cliffs at Glassy.  Given current bankruptcy proceedings, from which we understand The Cliffs might emerge in a matter of weeks, real estate prices are at their low ebb.  For those with a slight appetite for risk as well as high-end living at bargain prices, contact us to talk about The Cliffs.

For those oriented more toward a classic golf club with a diverse and engaged membership, and a golf course good enough for the pros but no back-breaker for the average player, Thornblade, with single-family homes ranging from $400,000 to $1 million+, is a great choice.  Either way, you will be close to the interesting, stable and up and coming Greenville, SC.   Please contact us for more information. 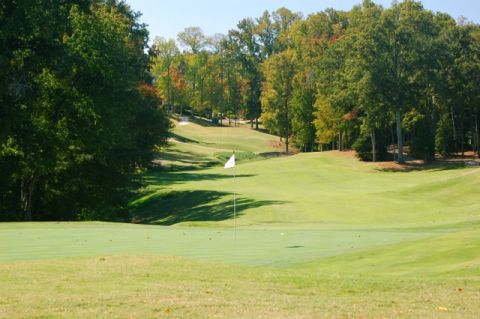 More in this category: « Lack of Appreciation: Greenville, SC, should be on retirees’ radar, but it isn’t...yet Colleton River: Two of the best golf courses inside the gates of any community »
back to top
Back to Top