Golfers don’t typically check the tide tables before heading out to the golf course, but those with plans to play the Jack Nicklaus designed Pawleys Plantation Golf Club might consider it.  The short par 3 13th at Pawleys Plantation, its green almost totally surrounded by marsh and with no bailout area, is scary enough without the added attraction of hundreds of golf balls sitting in the marshy muck between the tee and the bulkhead that props up the green.  A confident swing is a fundamental requirement on the 13th tee, and the open grave beneath the tee box inspires much more dread than confidence.  Better to play the hole at high tide, when the results of poorly played shots are out of sight.

The hole plays short –- just 145 yards from the tips, 115 yards from the blue tees and a paltry 69 yards from the white tees –- but the green at the 13th is smaller than the famed 17th at TPC Sawgrass.  At a mere 1/2 mile from the ocean, with nothing but marsh separating the two, the green is open to a prevailing breeze that typically blows from left to right.  On breezy days, a proper shot must start at the left edge of the green and ride the zephyrs back toward the meaty part of the putting surface (“meaty” looking more like a lamb riblet from the tee box than a hunk of ribeye).  If the wind reaches, say, 15 mph, not unusual so close to the Atlantic, a proper tee shot must start out over the marsh. 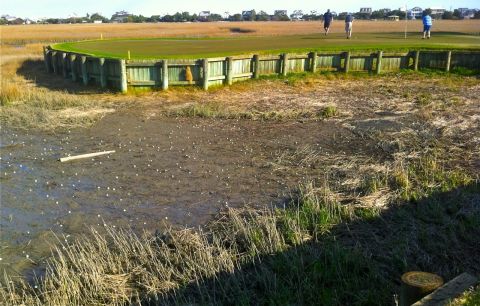 The muck and mired balls in the marsh short of the 13th hole at Pawleys Plantation do not exactly inspire confidence on the tee box.

Members and those who have played Pawleys Plantation over time learn to ignore the pin position, denoted by the standard flag colors of red (front), white (middle) and blue (back); the tee shot is all or nothing at all.  Since the green tilts from back to front, well-struck wedges or 9 irons will stick where they land.  And because the green is so small, the reward for staying on it results in a putt of reasonable to short length for a birdie.  But if your shot joins those balls in the muck short of the green or beyond it, the drop area 10 yards to the right of the putting surface makes the third shot enormously difficult.  Not only must the length of roll of the chip shot be judged perfectly, but it also must traverse the tilt of the green from right to left. If the pin is yellow, the best you can hope for is a 15-foot putt for bogey from beneath the hole.

If you want to have fun with your playing partner on the 13th, bet him on the tee that he can’t make a bogey four.  If he stays on the green, concede his par putt, if not the birdie.  But chances are you won't have to; bogey four is the toughest score on the “short par 5” at Pawleys Plantation. 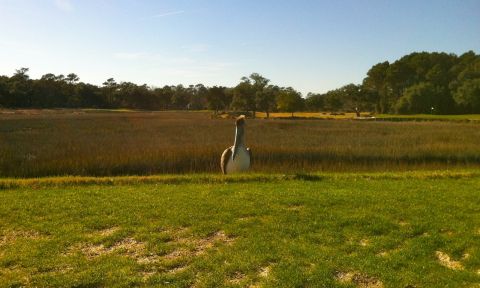 The back nine's two par 3s at Pawleys Plantation, #13 and #17, play off the dike that once controlled water flow on the former rice plantation.  A native pelican prefers the 17th (background right) to the 13th.

More in this category: « Couple purchases Cliffs Communities, but door appears open to additional bids Myrtle Beach golf condos on sale »
back to top
Back to Top