Not Fade Away: Doglegs are all right at Heritage Plantation in Pawleys Island, SC
Sunday, March 20, 2011

Not Fade Away: Doglegs are all right at Heritage Plantation in Pawleys Island, SC

I had forgotten how pretty it is on and around the golf course at Heritage Plantation in Pawleys Island, SC.  Live oak trees are to the Low Country of South Carolina as lights are to Paris or skyscrapers are to New York City, and Heritage has these 200- and 300-year old gnarly monsters in profusion.  They are beautiful to look at but horrible to work the golf ball around.

The design of the circa 1986 Heritage, which is a mile west of Highway 17, the main coastal route through the Carolinas, is often credited to Larry Young, but as one long-time resident of Pawleys Island said, “Trust me, Larry must have had a lot of help.”  Indeed, the guiding hand for Heritage was the prolific Dan Maples, but the inspiration for the golf community came from Young, a developer who was instrumental in helping to put Myrtle Beach on the map as a premier golfing destination. 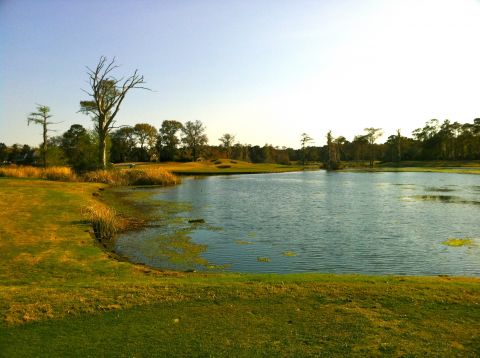 Even the par threes at Heritage look like doglegs to the right, although the play is directly over the water to the green beyond.

A bit overleveraged even before the latest recession hit, Young is no longer a major player on the Myrtle Beach golfing scene, but Heritage is a fine legacy for him.  He took great care to keep housing and golf as separate as practical.  You cannot imagine a single live oak having given its life for the sake of the layout, and that could explain the profusion of doglegs around the trees, most of them to the right.  In retrospect, I cannot recall many out of bounds stakes, but I did spray the ball beyond the immediate field of play a few times.  It was tough to find any alleyways toward the green once you were in those trees.

The putting greens at Heritage are generally enormous and multi-tiered, which makes placement of tee shots important, the more so because the doglegged two and three shotters outnumber the straight ones.  Our threesome, not the straightest hitting group, found very few sand bunkers during our round.  The bunkers that guard the putting surfaces, big and steeped, were more problematical than the fairway bunkers, which played their parts more as framimg than hazard.  The dogleg holes featured sharp angles, almost all favoring a fade, and it was tempting to skirt the trees at the crook of the leg to avoid long approach shots from the elbows.  Three times I had putts of more than 50 feet.

All those trees tend to affect air circulation, and Heritage’s turf conditions were not quite at peak form yet, or as good as some of the other courses in the immediate area, like the widely praised Caledonia Golf & Fish Club, True Blue  (both designed by Mike Strantz) and Pawleys Plantation, a Jack Nicklaus Signature course.  The greens looked a little “furry” but were deceptively fast.  On one of the largest, I hit to the top level, well above the pin just eight feet below the crest of the green.  I ran my putt along the ridge, stopped it just at the top, and watched it roll 10 feet past.  The greens were fast enough for me.

Heritage is a gated community just eight miles north of Georgetown, SC, and about 35 minutes from Myrtle Beach International Airport.  Single-family homes range in price from the $200s to over $1 million with views across the marsh.  The semi-private club is open to the public but offers memberships as well.  Using the Myrtle Beach Golf Passport, a $39 discount card that is available to second-home owners and full-time residents in the Myrtle Beach area, my green fees were just $60, which included not only a cart, but also two drinks and lunch.  The “rack rate” for Heritage during the current “high” season is $125. 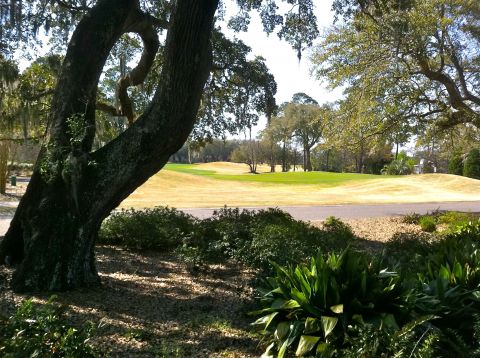 More in this category: « Good to Great: Dataw members decide not to leave well enough alone Father & Son Team Classic, a good time to bond…and look for a vacation golf home »
back to top
Back to Top