Written by  Larry Gavrich
Rate this article
(0 votes)
Today’s Sun News carries a long article on the state of the relatively few private golf clubs in the Myrtle Beach area.  Arguably the eastern half of America’s favorite golf destination, the Grand Strand, as it is known in many tourist guides, boasts of more than 110 golf courses within 90 minutes of Myrtle Beach center, but only five or six private ones (depending on your definition of “private”).  All are located in golf communities, but with the severe downturn in sales of homes, the surrounding residential neighborhoods are contributing precious few new members. Sun News golf writer Alan Blondin’s conclusion, after talking with members and staff at the local clubs, is that, as a matter of survival, the privates will have to find creative new ways to accommodate more golfers bearing the gift of increased revenues.

“Without an influx of funding,” writes Blondin, “some private clubs are in danger of failing.”

For some of those clubs, the situation is dire, and only short-term fixes will help them survive.  They’ve looked at the balance

If enough non-members play your private course, how long will you consider it "private?"
sheets and the reserves, if they have any, and decided the quick fix is to permit outside play on a limited basis.  That, of course, is a slippery slope and will work only as long as their long-time members don’t walk up to the first tee expecting to play on their lightly trafficked golf course, only to find that a couple of foursomes of green fees paying package golfers are in line ahead of them.  That is about the time that membership no longer seems to carry privileges much beyond those at the local muni.

The other short-term financial mechanism of current favor is to cut out initiation fees altogether and, in some cases, chop dues.  First, that doesn’t exactly endear you to your existing members who paid five-figure initiation fees; justifiably, that may seem like a slap in the face to those who have kept the club afloat through hard times.  But even if a club can overcome the frayed relationships with its existing members, the reduction in income is unsustainable over the long haul.  Raise the fees in a few years and the newer members will feel caught in a bait and switch.  But if you don’t raise the additional revenues, how do you pay for the new landscaping equipment, the workers who maintain the course, and the new irrigation systems that need replacing?  You can only defer maintenance for so long; eventually, special assessments will be necessary, creating more membership issues.  And should another recession hit, consider how well many clubs have managed this last one.  Golf club operators, trained to be good communicators with their memberships and boards, weren't schooled in the kind of creative marketing approaches that are needed to address the new realities of the golf industry.

Golf clubs moan that young adults aren't taking up golf, but they jettison the 23-year-old children of their members, charging them their own fees and dues. Duh.
marketing savvy.  The issues with private clubs are largely structural; the world around them has changed faster than they have.  The golf industry moans, for example, about young people ignoring golf as a pastime; and yet most private clubs still jettison from their parents’ plans the privileges of 23-year-old children of members and offer them their own separate plan with new initiation fees and dues.  Talk about short-sighted and uncreative.  How many 23 year olds, just starting their careers, have the financial ability to pay?  And how many of their parents, after paying for years of schooling, are going to want to foot that extra bill from their club?  The advice here is for private clubs to let parents keep their kids on their membership plans at least until age 30 or, better yet, do what The Reserve at Lake Keowee has done and let them retain their privileges, cost free, until their parents are no longer members.

There are plenty of other ideas private clubs have not explored.  The creative clubs will start thinking outside the box.  The others won’t survive, at least not as private clubs as we have known them.

You can read the Myrtle Beach Sun News article by clicking here. 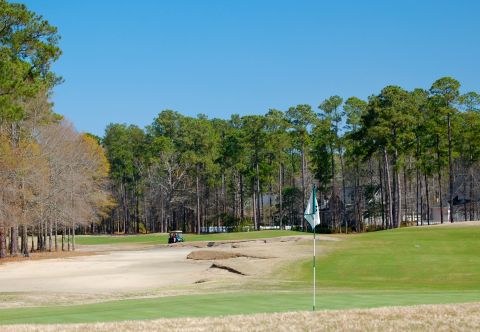 To sustain their viability over the long term, the Myrtle Beach area's few private golf clubs, like the Tom Fazio designed Wachesaw Plantation (5th hole shown above), will need to do more than just cut initiation fees and dues.

More in this category: « Name Confusion: A second Urbana poised to invade SC golf community market Clarifying building costs on Daufuskie »
back to top
Back to Top