Woodside Plantation: All things to all golfers, and then some
Monday, July 26, 2010

Woodside Plantation: All things to all golfers, and then some

To mix golf and baseball metaphors, Aiken’s 23-year-old golf community Woodside Plantation seems to have all its bases covered.  It offers its residents a choice between a 36-hole golf club with modest member fees and a 27-hole more exclusive club with both equity and non-equity membership choices.  Its selection of real estate runs the gamut from town homes that start in the low $300s to single-family estate homes that creep into seven figures, with hundreds of choices in between.  For those looking to build their own home, properties range from around $60,000 for a wooded lot to the low $100s for lots with golf course views.  You won’t spend more than a couple hundred thousand for the best lots in Woodside on an acre or more.  After that, count on about $160 per square foot to fit and finish your personal palace in grand style.  Also, the community provides such city services as sewers (no septic in Woodside), and for those who like to cook with gas, natural gas lines run through parts of Woodside.

In all, Woodside offers a wider range of choices than its two prime local competitors, Cedar Creek and Mt. Vintage Plantation, including proximity to retail and medical services.  A mall is located just outside the community’s back gate and features a full range of retail stores, a wellness and medical center and array of restaurants (the charming center of Aiken, which features additional shops and restaurants, is just a short drive down the road).  But the mix of options inside the 2,800-acre community's four gates, especially the recreational activities, is what tends to attract families and retirees alike.  Between the two clubs, residents have access to 14 Har-Tru and clay tennis courts, some lighted; six nature preserve areas and four lakes for non-motorized boating and fishing; a community garden center; and plenty of on-site dining through the two clubs.   Aiken also has a long history of horse events, from steeplechase to other races, and an equestrian center is just outside the gates of Woodside. 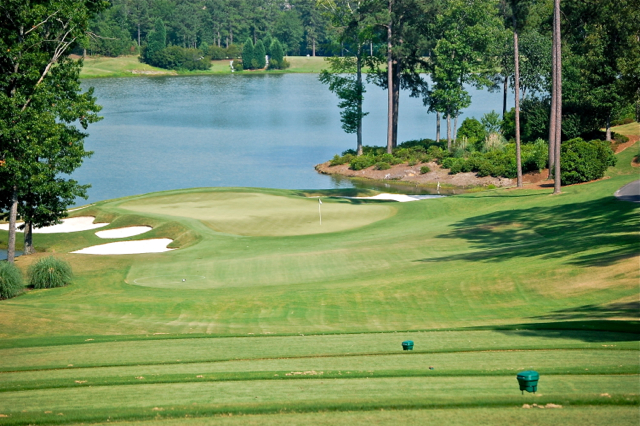 The front pin position (day I played) is the easiest on the 3rd hole at Woodside
Plantation's Reserve Course.  A back left positon would demand an extra club
or two and a lot more courage.

This all-activities-for-all-people approach has attracted an eclectic group of permanent residents to Woodside.  Half of Woodsiders are retired and the other half are still working (and half of those are empty nesters “practicing” for eventual retirement).  The most notable sub-group of residents is the Women of Woodside, an active bunch of the ladies who organize and promote everything from a newcomers club to book clubs, lunch clubs, gourmet cooking classes, gardening and an active community volunteer program.  You won’t be lonely or inactive if you live at Woodside.

When I first visited Woodside Plantation five years ago, I found the club membership situation confusing.  Club Corp of America

runs the Woodside Plantation Golf Club and its Rees Jones and Bob Cupp courses; the Woodside developers own The Reserve Club at Woodside Plantation and its Nicklaus Design and Fuzzy Zoeller courses (only 10 holes open so far on the Zoeller course).  Few residents at Woodside see the need to join both clubs and, thus, Woodside is somewhat in competition with itself on the golf front.  Thus the community’s web site doesn’t exactly give the Club Corp courses top billing, but neither do they ignore them.  Three and a half courses is still a good marketing proposition, no matter how different their fee structures are.

Fees at The Reserve Club are $17,000 for a non-refundable membership plan and $34,000 for a 100% refundable plan (after a minimum of two years membership).  Dues run $349 per month.  At the Woodside Plantation Golf Club, Club Corp charges an initiation fee of $6,000 for full family golf and dues of $332 per month.  The fee is not refundable, but members have privileges at many of Club Corp’s other private clubs nationwide.  According to Woodside sales representatives, families tend toward membership in the Woodside Club and retirees seem to favor The Reserve.  Few join both, although many opt for a social membership at the one where they don’t play golf. 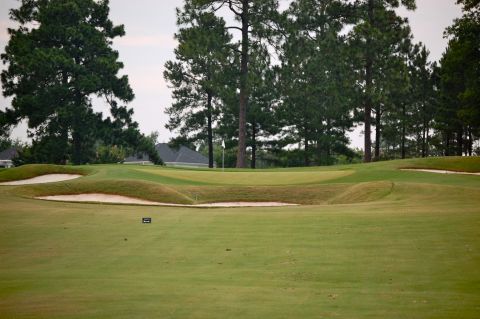 With a false front and surrounded by puckered bunkers, the two-level
18th green at The Reserve yields pars begrudgingly.

I played The Reserve's Nicklaus Design course recently and found it in peak condition and enjoyable to play.  I was not feeling too frisky and may have moved up one set of tees too far (6,200 yards from the White tees), taking too much advantage of the course’s generally wide fairways and leaving myself a majority of lofted shots into the well-protected greens.  In retrospect, I should have moved back one set of tees, almost 400 yards total.  Still, I found nothing to quibble about in the layout, and the ample bunkering and changes in elevation kept me on my toes.

A few holes were memorable.  The par 3 3rd, which plays downhill at 193 yards from the White tees (well over 200 from the back tees), is drop dead gorgeous, one of those holes you imagine the designer conjured the moment he laid eyes on the raw land.  The green juts out into the lake beyond, and all that can save an errant shot from watery doom left or right are the greenside bunkers.  With the pin up front, the huge green is tough to fly, but when the pin is back, a decision must be made; tempt fate and water by going for it, or play short and run the risk of a 70-foot three putt from the bottom of the long and two-tiered green.

The 6th is another excellent hole, a 515-yard par 5 with a tee shot that must fly 150 yards of scrub to find a fairway that tilts significantly to the right.  Bunkers guard both the elbow and crook of the dogleg.  The high side of the fairway is the ideal landing zone to prepare for a routine lay-up down the left side as a large bunker protects the right two-thirds of the slightly elevated green.  Greens are well protected at The Reserve, but they are also large enough that they can receive shots flown over the front bunkers; of course, that can result in some longish putts down slopes to front pin positions.

After a blind drive over the upslope in the fairway, the approach from the top of the rise on the par 4 16th hole is to a green that

looks familiar, with lake behind and bunkers guarding the right and left front.  Although the combination of lake and bunkers is a clear echo of the par 3 3rd hole, no one will quibble with the view, even for a second go-round.  The finishing hole also demands two stellar shots, the first to avoid a ravine and bunker that guards the entrance to the fairway; add to that a bunker on the far side of the landing area, and the safer play is also the longer path to the green, to the right.  Deep and high-lipped bunkers surrounding the putting surface give the green complex an intimidating puckered look from the fairway.  The false front will stop any short shots dead.  A par at the 18th will be well earned and likely the capper to a good scoring round at The Reserve.

One nice side benefit to Woodside’s Aiken location is its proximity to Augusta National Golf Club and April’s annual Masters golf tournament.  The more enterprising homeowners in Woodside Plantation offer their homes for rent to attendees at The Masters, fetching anywhere from $1,500 to $5,000 for the week, enough to cover annual club dues or for a nice week of golf in the Caribbean.  It can pay, literally, to live at Woodside Plantation.

Woodside Plantation, Aiken, SC.  Web:  WoodsidePlantation.com.  Properties from $60,000 to $300,000.  Homes from $300,000 to $1 million+.  Woodside Plantation Golf Club:  36 holes by Rees Jones and Bob Cupp.  The Reserve Club:  18 holes by Nicklaus Design and 10 by Fuzzy Zoeller (final 8 planned).  For more information or to arrange a visit to Woodside Plantation, contact me.  Some of my clients have visited (and liked) Woodside, and I will be happy to share their comments. 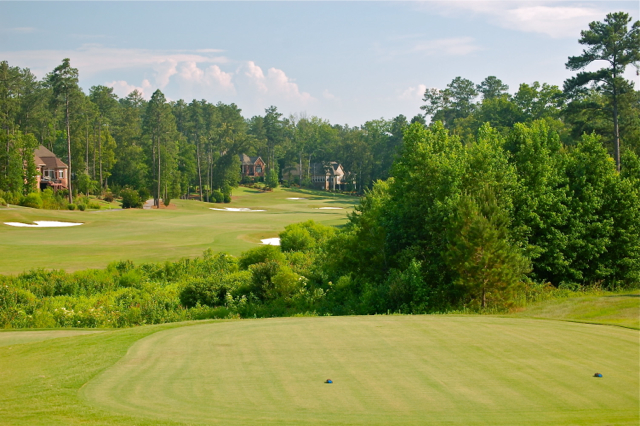 At the par 5 6th hole at The Reserve, the biggest challenge is the tee shot which
must fly a ravine and then skirt bunkers that bracket the fairway.

More in this category: « My golf course sold Thornblade Club pros make habit of winning »
back to top
Back to Top