Who are you, and what have you done with Pete Dye?  This was the question I silently asked as I made my way around the front nine at the Windermere Country Club course in Blythewood, SC, near Columbia.  The course design is credited to Pete and P.B. Dye and, naturally, I was expecting fairway moguls, some pot bunkers and maybe a few railroad ties thrown in for good measure.  Instead, the front nine played as if it were designed by, oh, George Cobb, or Clyde Johnston, or Willard Byrd -– which is to say quite competent and enjoyable, but not exactly a feast for the eyes or a challenge to club selection.

The layout takes a dramatic turn on the back nine, as if someone slipped P.B. a hallucinatory drug and he metamorphosed into

Seth Raynor or Mike Strantz.  Hints at the revolutionary turn begin at the par 4 8th, with a pond at the right front of the green, simple enough to maneuver around but the first true hazard of the round.  At the par 3 #9, water is in full regalia from tee to green but there is nothing dramatic or revolutionary about its positioning.

Then, at the turn, things indeed turn, with the earth gouged from the middle of the fairway at the 10th, the sandy bottom waiting to catch a slightly thinned shot (I obliged) and turn a short par 5 into a large headache. The elevated green, with a nearly two-story cliff along its right side, bunker at bottom, adds to the misery index.  The hole is a real jolt after such a mild front nine.

At #11, a large waste bunker extends from tee to even with the 150-yard post, the largest waste area to this point.  It seems utterly disharmonious with what has come before (but not what comes after).  Pot bunkers guard the front of the green at #12, but the eye goes to the huge mounds that, from the tee box, appear to front the green but, in reality, are background to it.  And so it goes in terms of design variety and eye appeal the rest of the way –- pot bunker directly in front of the green at the par 3 13th; huge mound blocking most of the green from the right half of the fairway at #14; hard dogleg right around a lake at #15; a blind, straight-up-the-hill tee shot at #16, with a nasty tall pine tree guarding the right side of the green; all carry over water to a crowned green at #17; and then the par 5 18th, which mimics so many finishing holes at professional tournaments (Harbour Town, Pebble Beach) with water down the entire left side to the edge of the green.

Columbia is about the hottest spot in all of South Carolina in summer, and I played in 100-degree heat.  I was tempted to head for the air-conditioned safety of the car after nine.  I am glad I didn’t.

The community that surrounds the private Windermere Country Club is mature, well organized and landscaped, with mostly large brick homes priced in the mid-six figures.  It is part of the larger Longcreek Plantation, which comprises the 27-hole Ellis Maples designed Columbia Country Club as well (a very nice traditional layout that was totally renovated in the early 2000s).  Many of the Windermere homes feature nice views of fairways and greens but, with few exceptions, they are set well back on well-treed lots.  If you would like more information on Windermere or the Columbia, SC, area, please contact me. 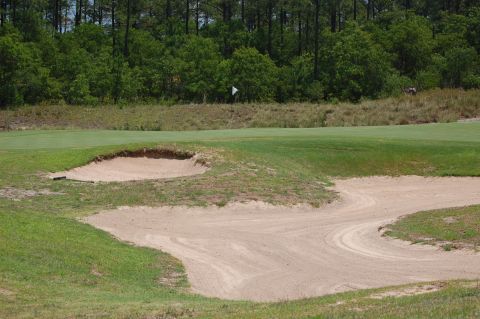 The bunkers fronting #8 at Windermere are about as tough as it gets on the front nine. 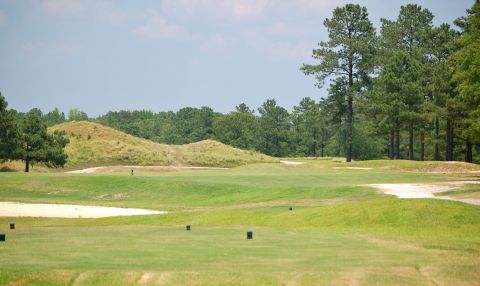 From the tee box at #12, it appears the large mounds might be in the fairway and blocking the approach to the green.  However, they form the background for the green.

Somehow we never tire of those finishing holes around water that demand caution but reward prudent risk.

More in this category: « Keeping It Private: Only three clubs truly member-only in Myrtle Beach Fortune smiles on Greenville, SC »
back to top
Back to Top