If I had a choice of a pure getaway place -– one with excellent golf and a relaxation ethic –- I’d be hard pressed to look any place but Daufuskie Island, SC.  Daufuskie, reached by ferry only, is without vehicular traffic, except for a few utility trucks.  Homes inside the island's two golf communities are generally spaced well apart, and where they aren’t, the hardy live oak trees make them feel as if they are.  The golf on Daufuskie is superb, with 29 holes at the private Rees Jones-designed Haig Point enclave and 36 holes by Jack Nicklaus (Melrose Club) and Tom Weiskopf & Jay Moorish (Bloody Point) at the Daufuskie Island Resort, a 10-minute golf cart ride away.

Relaxing though the island may be, homeowners have endured much stress the last five years, and especially in the last year.  Trouble came to paradise a year ago when owners of the Daufuskie Island Resort and Breathe Spa could not make payments on their loans, and the property went into bankruptcy.  The Nicklaus course, The Melrose Club, closed for a time but reopened a few months later, but the Bloody Point Club has remained closed, although property owners there have done their best to provide ongoing maintenance. 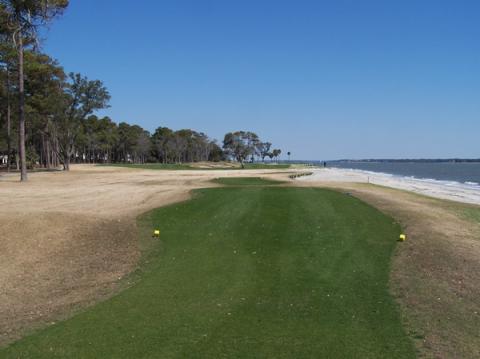 Jack Nicklaus' Melrose Club course on Daufuskie Island has remained open after its accompanying resort went into bankruptcy.  The course presents some typical Golden Bear touches, like the tree in the middle of the fairway at the finishing hole along the Calibogue Sound.

Now, it seems, there is renewed hope for the island dwellers and their real estate values.  Two weeks ago in bankruptcy court, a North Carolina group was granted the rights to the property for $49.5 million.  Although creditors are kicking up a fuss about the proceeds from the sale, most observers in the area expect the new owners will close on the property in the next week or two.  This is good news for homeowners, and possibly for investors looking for island property at depressed prices.  The window of opportunity may be closing if the new owners say and do the right things to restore confidence.

I really enjoyed my round at the Melrose Course three years ago; I did not play the Bloody Point course.  The Calibogue Sound and the Hilton Head lighthouse beyond is in view from some of Melrose’s holes, especially the finishers, and where it isn’t, marsh and live oaks dominate the scene.  The circa 1987 layout is Nicklaus post-apprenticeship with Pete Dye, and the course certainly shows some of his mentor’s influences (a few railroad ties here and there) but it is more interesting for the hints it gives of the later Nicklaus design traits.  Chief among them is a tree in the middle of the 18th fairway that provides a safe but longer route left and trouble (the Atlantic Ocean) along the shorter route to the right.

Daufuskie Island is a “niche” living situation, certainly not for everyone but appealing to both ends of the “intrepid” spectrum; that is,

those who love the adventure of ferrying back and forth to civilization, and those who just want to plop themselves down as far away from civilization as they can get.  Daufuskie is a great place to be a well-cosseted hermit.

In the best of times, the market for vacation and permanent homes on Daufuskie is small; in the bad times, it just about dries up.  At Haig Point, where carrying costs are high because the residents subsidize their own ferry and lavish attention on their over-sized golf course, you can purchase a nicely appointed three- or four-bedroom home for under $600,000, and the owners will throw in the $65,000 golf club initiation fees as well.

At the Daufuskie Island Resort, the anxieties of the resort’s default

Daufuskie is a great place to be a well-cosseted hermit.
have also resulted in prices that, for comparable properties on the mainland so close to the water, would be considered a steal.  For example, a .38-acre cul-de-sac lot on the 7th fairway of the Melrose course, with long views across a salt marsh to the Calibogue Sound, is currently listed for just $119,000.  Another lot, ½ acre on the 2nd tee and a short walk to the beach, is listed at $175,000.

These are tempting prices for beautiful properties on an island that seems far from the demands of the real world.  And if things proceed well with the new resort owners, and Haig Point and the Daufuskie Island Resort marketing can once again widen the market for island living, today’s prices may look awfully good a couple of years down the road.

If I were considering Haig Point or the resort for a vacation or permanent residence, I’d be inclined toward buying a home rather than a lot.  Building costs on Daufuskie are two to three times those on the mainland, owing to the expense of ferrying-in materials and labor, as much as $400 per square foot.  At current prices for homes in Haig Point, the cost per square foot, land included, is somewhere between $200 and $300 per foot.  I know a few professional agents in the area who specialize in Daufuskie Island properties.  If you’d like more information about the island or specific homes for sale, contact me and I will put you in touch with an expert.

The famous Bloody Point Lighthouse served as the pro shop in the course's early days.  When it came up for sale, a couple who lived at Haig Point jumped at the chance to own it.  It is an interesting story that you can read at the lighthouse owner’s web site, WeBeBloggin.com. 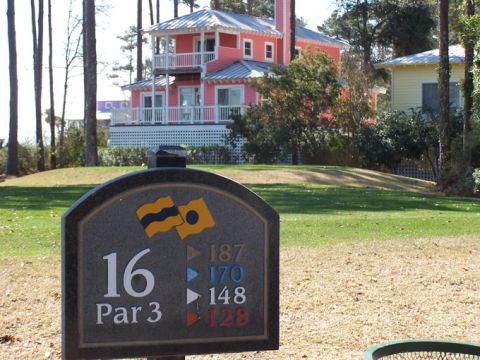 With uncertainty about the adjacent resort, the future in the community surrounding the Melrose Club was anything but rosy.  But news of a buyer for the property has homeowners feeling in the pink again.

More in this category: « First Cliffs Communities condos open Unfinished business: Gary Player home ready at Cliffs, but his golf course must wait »
back to top
Back to Top