Repeat performance: A look back at The Reserve Club of Litchfield Beach
Thursday, June 11, 2009

Repeat performance: A look back at The Reserve Club of Litchfield Beach

Members of The Reserve at Litchfield Beach, a private club at the golf-rich southern end of Myrtle Beach's Grand Strand, overwhelmingly voted to sell the club to the McConnell Golf Group of Raleigh, NC.  The trouble is that the sale is being held up by former members who have brought suit to recoup their equity investments.  I played and reviewed the course a little over a year ago and thought this was the appropriate time to look back, especially since the McConnell Group plans to close the course for three months after purchase and redo the greens and some other aspects of the Greg Norman layout. 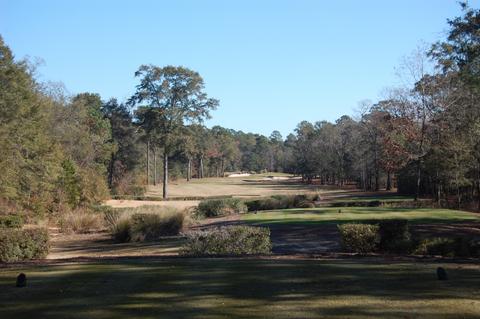 To have a decent chance at par on the tough 5th hole at The Reserve, a drive down the left side is essential.

Greg Norman designs golf courses the way he plays them - brawny and all or nothing affairs that show little sensitivity to the needs of double-digit handicappers.  Playing from shorter tees doesn't really help much when deep bunkers and hazards snuggle up to large and significantly contoured greens.
But a mellow Norman design can provide quite a reasonable challenge, as we found on New Year's Day at the private Reserve at Litchfield Beach, a 1998 Norman design on the South Strand of Myrtle Beach.  The Reserve is one of just a handful of private courses along the golf rich Grand Strand and among the three best, all on the south end.  The others include the Pete Dye designed DeBordieu and Tom Fazio's design for Wachesaw 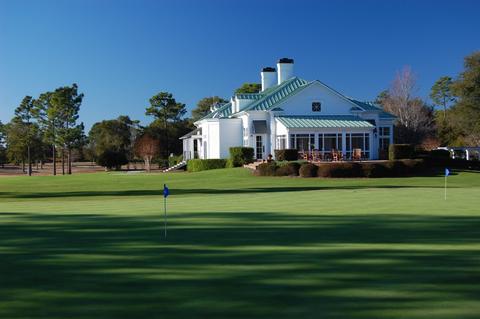 Plantation, both of which might be surprised - along with the Members Club at Grand Dunes and the Surf Club in North Myrtle Beach - that The Reserve's web site calls it "the only exclusive golf club on the Grand Strand."
Price points for homes at The Reserve fit nicely between the other two, with handsomely designed single homes on ample lots starting in the mid six figures.  Prices at DeBordieu Colony, which includes some seven-figure homes on and near the ocean, average about 10% higher than The Reserve.  Wachesaw, like The Reserve to the west of Route 17, the main thoroughfare through the Grand Strand, presents homes that begin in the $400s and move up to the $1 million+ mark for the larger lots on the Waccamaw River.
The Reserve's operators showed some restraint by not over-seeding the fairways for the winter, and to my mind, that strategy worked to the course's advantage.  Rather than the tufts and inconsistent growth of fill-in winter grasses, the dormant fairway Bermuda grass was as tight as during the warmer months, although with a little rain in prior days, tee shots did not roll far past their landing areas.  The greens were near flawless, especially for a January, but the grass mowers were not out on New Year's morning so they lacked a little speed.  Our hosts assured us that earlier in the week, the putting surfaces had been slick.  I believe it.
Greens were enormous and crowned in some places.  Norman has done a wonderful job of channeling Donald Ross around the greens.  Misplaced approach shots typically find the depths of a swale and require either a delicate chip shot or a long putt from up to 15 yards off the green.  We were impressed that even during the winter, putting from well off the greens was not only possible but, in many cases, preferable.
I can't say that any holes at The Reserve are etched in my mind forever, but some stand out.  The best was also the #1 handicap hole on the course, the par 4 5th, a dogleg right that plays to a modest 395 yards.  A lone tall pine on the left side of the fairway forces a slight draw off the tee.  Pushed drives to the right side of the fairway make it essential to fade your approach shot over two sod-walled bunkers that guard the front and right sides of the green.

The par 3s all play over waste bunkers or marshland, but the large greens are fairly easy to hit. (if difficult to putt, especially when they are cut to roll fast).  The 17th, at 175 yards, is all carry to a large contoured green that makes being below the hole almost mandatory to avoid three-putt possibilities.  For a hole-by-hole description, click here for The Reserve's web site.
The Reserve offers two levels of golf membership.  For an initiation fee of $32,500 and dues of around $350 per month, full golf members play unlimited golf and have the run of the club.  A special "Golf Membership" is geared toward second-home owners and provides 26 rounds of golf annually for an initiation fee of $22,000 and dues up to $200.  Members have a huge practice range and green at their disposal, and the clubhouse, while not huge, is well appointed.  The greeting at the bag drop make guests feel like members. 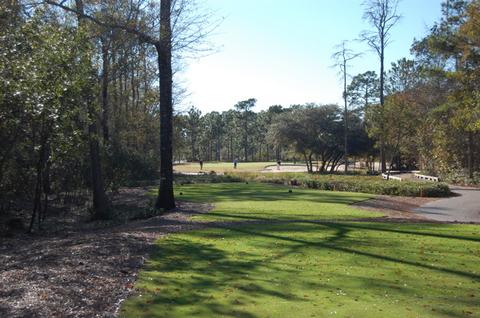 Par 3s at The Reserve are all-carry affairs.  The 17th forces a high soft shot to an undulating green.  Placing your tee shot below the hole is best.

More in this category: « The Thornblade Club, home of champions Equity return issue holds up sale of The Reserve; Oldfield, Palmetto Bluff in trouble? »
back to top
Back to Top