More than 90% of the members at Myrtle Beach area private golf club, The Reserve at Litchfield Beach, voted recently to sell to a North Carolina entrepreneur.  Now, four former members are holding up the sale.
According to an article in the Myrtle Beach Sun News, the former members claim they are owed reimbursement of their initiation fees under terms that were in effect when they joined the 11-year old club.  However, the former members claim that the proposed sales agreement with the McConnell Golf Group would eliminate their reimbursements.
As a rule, initiation fees at equity clubs are higher than those at non-equity clubs.  In an equity arrangement, club members are reimbursed a percentage of their "deposits" when they resign;

Getting back your equity "deposit" can sometimes take years.
these percentages are typically in the 75% to 100% range.  But the rules that govern reimbursements can be complicated and include formulas that are based on new memberships being sold before old ones can be repaid.  Many is the former club member who waited a few years before receiving the promised refunds; at clubs where membership has steadily declined over the past few years, former members are still waiting.
The Reserve is a fine Greg Norman layout less than a couple of miles from the ocean.  Homes in the community sell in the mid-six figures range and up.  The McConnell Group has pledged to keep the club private for at least 10 years and intends to close the course for three months, if the deal goes through, and redo all the greens.  However, if the current members and their former fellows cannot resolve their dispute, McConnell may look elsewhere for an addition to its growing portfolio of golf courses in the Carolinas.  There are plenty of nice but financially strapped clubs to choose among.

The digital ink is hardly dry on my review of the Oldfield community in Okatie, SC, near Hilton Head.  Yet, apparently, the community could go bankrupt along with its higher-end sister community nearby, Palmetto Bluff, and its parent company, the developer Crescent Resources.  Crescent's roster of communities includes some nice golf layouts, including one of the best Arnold Palmer courses I have played, North Hampton near Jacksonville, FL.  The Hilton Head area newspaper the Island Packet reports that Crescent is $1.4 billion in debt, and a Crescent spokesperson is quoted as saying the company is contemplating bankruptcy as one alternative.
I'll follow developments here, pardon the pun but, in the meantime, you can read the Island Packet article by clicking here. 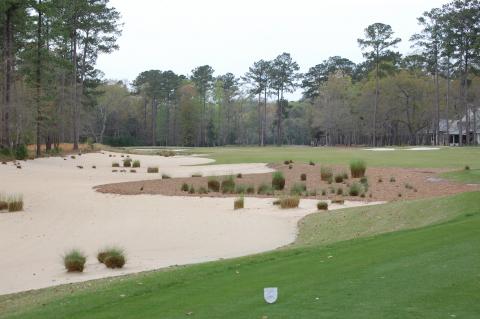 The Greg Norman layout at Oldfield features plenty of waste bunkers and pine trees, as well as an uncertain future.

More in this category: « Repeat performance: A look back at The Reserve Club of Litchfield Beach Wachesaw earns Club of the Year distinction »
back to top
Back to Top