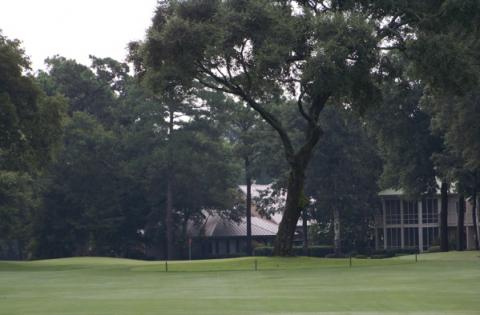 The tree on #9 at Pawleys Plantation is dead center of the fairway.


Dye has his bulkheads, Fazio his funneled fairways and hidden cart paths and Palmer those bunkers on steroids.  Jack Nicklaus has his trees, an affection - some might say an affectation - that he uses to make angles out of straight lines.
I am playing the Golden Bear's Pawley's Plantation course this week with a new respect for what I used to think was design silliness - lone trees placed in the middle of fairways that force you to go around or over.  But it occurred to me this week -- it only took me 10 years and dozens of rounds at my vacation home course -- that sly Jack has used the trees to make dogleg holes where a left to right or right to left orientation was impossible or ill-advised on the land he was given.
Nowhere is the magic more evident than at the 9th hole, a 380-yard par 4 from the men's (blue) tees.  A big live oak is almost dead center in the fairway, forcing mortals

Prices have softened in Pawleys Island; two villas on the 12th fairway are on the market for $325,000 and $298,000.
to aim left or right of it and others to attempt to fly over it (I've tried; I'm mortal).  The right side leaves the best angle to an elevated green that has little depth to it.  The left side only works if you scoot just by the tree; anything too far left and you can be shut out by another live oak hovering over greenside left.
At #11, a par 5 (548 yards), two live oaks cover the entire middle to right side just 90 yards from the green. Your option on the approach is either a fairway wood to the left of the trees, or to lay back for a 150-yard shot over the trees.  Push the aggressive approach a little right and you will deal not only with overhanging tree branches but also with the sand bunker in which the trees stand.  What makes the third shot even more daunting from the left side is that you are hitting to the narrowest part of the green and must fly two greenside bunkers to get there.
The tree in the middle of the fairway at the 495-yard par 5 14th is a modest little thing, but it is smack in the landing zone off the tee.  If you wind up directly behind it, even 20 yards back, you have two choices, both equally bad.  You can aim at the edge of the marsh down the right side - it runs all the way to the green - or at the grove of trees about a three-iron away on the left.  Pull the ball too far left and the backyards of single-family homes - and OB stakes - come into play.
By the way, real estate prices, which have been holding up pretty well in the Pawleys Island area, seem to have softened a bit in recent months as the prime market - northern baby boomers - are having trouble selling their homes in New England and the Midwest.  Two nice vacation villas on the 12th fairway at Pawleys Plantation, with views across the 12th fairway and a peek at the marsh beyond, are on the market for $325,000 and $298,000, down about 10% from similar homes for sale a year ago.  If you are interested in more information about Pawleys Island or the Myrtle Beach area, let me know (use "Contact Us" button above) and I will do my best. 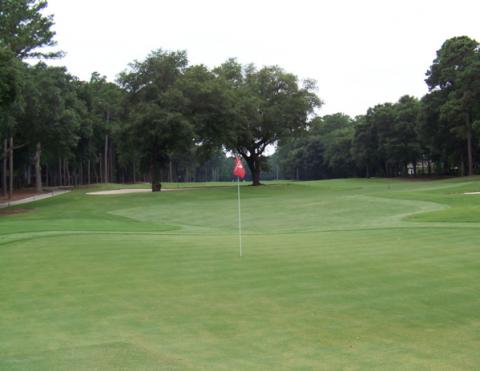 Two trees in a bunker just 90 yards from the 11th green force a thoughtful and challenging lay-up shot on the par 5 (photo taken from behind hole). 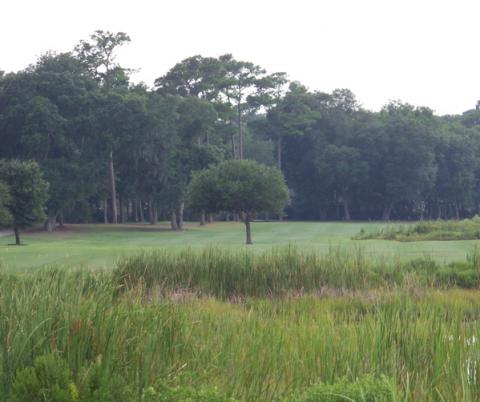 The small tree in the middle of the 14th fairway could have big consequences for the final score on the par 5.  It is in the landing zone and if your drive winds up behind it, you will face a shot toward the marsh on the right or the trees (and out of bounds) on the left.

More in this category: « Groin pains: Structures could hold back sands, but will the costs pit neighbor v neighbor? Review: Cherokee Valley, Travelers Rest, SC »
back to top
Back to Top