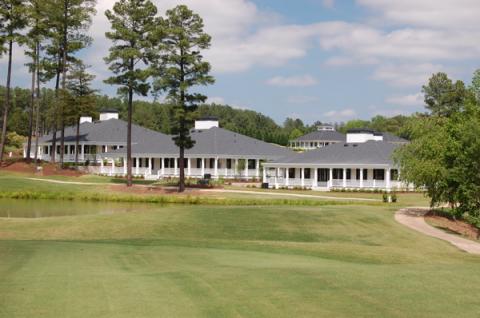 The Cottages at Cherokee Valley feature dramatic wraparound porches for the best views of the 16th green and 17th tee.  The interior layouts mimic those of the cottages at Augusta National.

As Yogi Berra might put it, my walk through one of the Cottages at Cherokee Valley was "déjà vu all over again."  I had the feeling I had seen this layout somewhere before -- the four master-sized en-suite bedrooms, one in each corner of the layout, and the large, comfortable living room and dining area combination where tired golfers can flop down for a beer and a view of The Golf Channel on the big screen TV hung above the

Virtually all the flags were positioned a third of the way up, no matter where the pin was.
fireplace. The small kitchen just inside the front door, as well as the full bath and laundry room across from the kitchen, seemed oddly out of place, but the rest of the Cottage had the hint of the familiar.
Then it hit me:  It was a larger version of a tidy little cottage at Augusta National where I was fortunate to stay and play for two days 10 years ago.  Cherokee Valley's Cottages seemed to be trying to channel Augusta.
After my two days at the famed site of the Masters, I can say I know Augusta (a little), and Cherokee

Valley is no Augusta.  But the Cottages in the Travelers Rest, SC, community, priced beginning around $650,000, are well configured, the rest of the community pleasant and close to the fine city of Greenville, and the golf course playable and in nice condition, if not overly challenging.  As I wrote here a few days ago, with the dramatic Blue Ridge Mountains just to the west of the course, it was disappointing that they were hidden in plain sight.  Most holes on the P.B. Dye routing played away from the scenery, and those that played toward it were carved into funneled fairways that hid all vistas.  Also disappointing was a lack of attention to the little things that compel golfers to return.
Cherokee Valley's course is short, just 6,500 yards from the back tees, with a rating of a mere 71.3 and slope of 133 on the par 72 course.  Dye, son of the uncompromising Pete, must have been given strict instructions to simplify the Cherokee Valley layout for what were expected to be higher handicap golfers in residence.  I probably have no right to declare the course easy since I not only played from the tees at 6,100 yards (69.0/124) but also hit the ball miserably (I barely broke 90).  But all the par 3s were rather routine, except for #6, a 200-yard downhill shot that provided the only true view of the distant mountains.  Alas, #6 played much shorter for me because a slope about 175 yards from the tee brought my dying quail shot down to the green, about 20 feet from the pin.  The other par 3s measured 125, 170 and 156 yards; the few bunkers in sight, yards away from greenside, did not threaten slightly misplaced tee shots on the one-shotters.
Only one par 5 at Cherokee measures more than 500 yards from the men's tees and the rewards on these holes are way greater than the risks of attempting daring approach shots.  The only time water came into play,

on the par 5 16th, the small lake sat in front and well to the right of the green.  You would have to work harder to land in the water than onto the green with a wedge approach shot.  Holes 12 through 15 play like an executive course -- two par 3s averaging 162 yards and two short par 4s, the 338 yard 13th and the 278 yard 14th.  The 14th is the most interestingly designed hole on the course, a hard dogleg left that requires a deftly played five wood or hybrid club from the tee aimed over the left edge of the fairway.  That leaves a wedge to a small green, just beyond a pond fed by an attractive waterfall.
Conditions were quite nice, with nary a bad lie in the fairways and greens that were smooth and medium fast, although some, including the practice green, appeared to have been spray painted a bright green.  The attractive homes were kept well away from the field of play.  Only the aforementioned Cottages, behind the 16th green and well to the left of the 18th fairway, were anywhere close, and that made sense since those residences are all about the golf experience (and views).
I was miffed by some silly little missteps out on the course, the most egregious of them being pin placements

on greens.  Cherokee Valley chooses to use the small-flag-on-the-flagpole approach.  A flag roughly one-third the way up the pole signifies a front pin, halfway up a middle pin, and almost all the way up a back pin.  Virtually all the flags were positioned a third of the way up, no matter where the pin was.  I hit my best fairway wood of the day to the 3rd green which sported a pin with the flag at one-third mast.  When I reached the green, I found the pin was on a high shelf at the rear of the green, 40 feet beyond my ball.  Cherokee Valley, which caters not only to members but also to visiting golfers and the public, should invest in colored flag systems or divide the greens into numbered quadrants and declare a number each day.
The ranger, who drove by once in his cart - on the back nine - could have been put to better use (such as checking the flag positions were correct).  Also, there was no beverage cart making the tour on a hot day.  Ball washers were infrequently available and 20 yards forward of the back tees when I did see them.  When I asked the kid at the bag drop where the clubhouse was, he directed me to the pro shop.  Workers were out on the course mowing grass, but I also saw some of them parked off to the side.  (Okay, everyone deserves a break, but for how long?)  I had the impression that a strong hand does not guide the operation at Cherokee Valley.

Perhaps the club, which has only 150 members, is suffering from a cash crunch, but treating fee-paying golfers cavalierly is no way to generate lasting cash flow.  The $5 wooden nickel they give you when you pay the reasonable $60 green fees (cart included) is a nice touch but not enough to make you forget the missteps.
The surrounding community is a mix of substantial homes on nicely sculpted lots perched on hills above the course or on ascending streets.  Some sections of the community feature small homes on small lots, whereas other, newer homes are typical of a higher end community.  The price range in the community is unusually wide, about $300,000 to over $1 million.  Available home sites are priced beginning at $150,000, with a 100% premium for the choicest lots with views of golf and mountains.

Landscaping in the community has been well handled; it is clear that the developers respected the many trees they found on the property and probably restricted the homeowners' natural attempts to clear them away to promote better views.
Cherokee Valley benefits greatly by its proximity to the vibrant upstate South Carolina city of Greenville, one of my favorites in the southeast, and about 25 minutes away.  Greenville is home to interesting museums, concert halls and restaurants, as well as a stable economy fueled largely by the BMW plant in nearby Spartanburg.  Greenville also is the hometown of Shoeless Joe Jackson, the legendary baseball player whose reputation was besmirched in 1919 when he was caught up in the famous Black Sox scandal at the World Series.  There is evidence that Jackson was a benign and innocent participant in the affair and, anyway, Greenville forgave him a long time ago.  His statue adds an offbeat touch to the city's downtown.
Cherokee Valley, 450 Cherokee Valley Way, Travelers Rest, SC.  800.531.3834.  Course designer:  P. B. Dye.  Full golf membership fees are $25,000.  Yardage/rating/slope:  Gold tees 6,586/71.3/133; Blue tees 6,084/69.0/124; White tees 5,395/66.9/113; Women's tees 4,308/69.7/119.  Cherokee Valley is home to a Golf Digest Training School which offers one, two and three-day training packages.  If you would like more information on the golf or real estate at Cherokee Valley, please contact us. 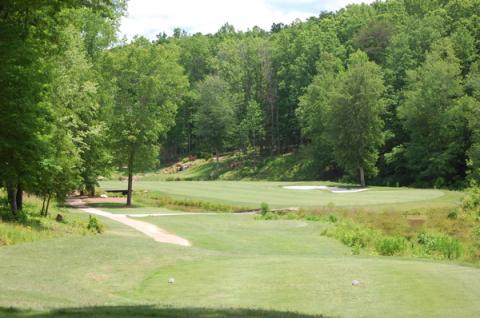 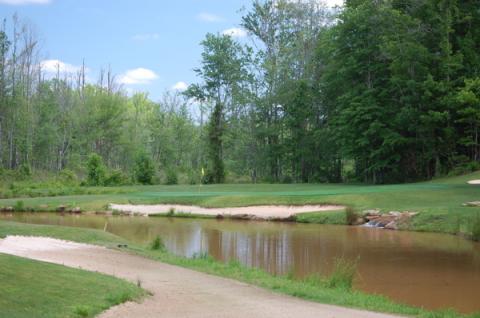 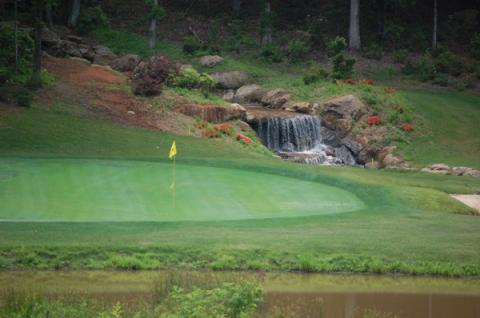 The 14th hole at Cherokee Valley is the best designed of the 18.  It begins (top photo) with a long iron or hybrid tee shot to a narrow landing area framed by bunkers on the right.  The short approach to the green (middle) must negotiate the pond in front that is fed by the greenside waterfalls (bottom).

More in this category: « I didn't know Jack: Nicklaus' trees turn straight holes crooked Going to town: BMW event moves from Cliffs to three courses near Greenville »
back to top
Back to Top