Going to town: BMW event moves from Cliffs to three courses near Greenville
Sunday, May 18, 2008

Going to town: BMW event moves from Cliffs to three courses near Greenville 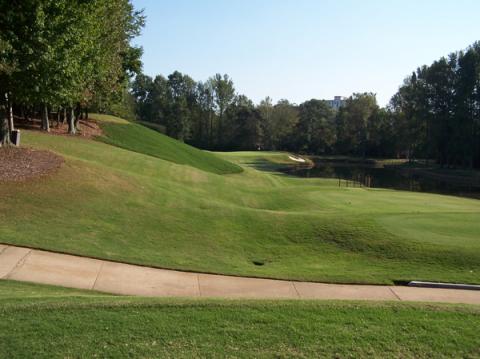 From tee to green, conditions at the Fazio-designed Thornblade Club are immaculate.


The final round of the BMW Charity tournament in the Greenville, SC, area will be played today on the Tom Fazio layout at the Thornblade Club in nearby Greer.  It marks the first time that the eight-year-old event has not been played on Cliffs Communities courses.
The Cliffs is the big kahuna in golf community development in upstate South Carolina, and a marketing machine with few equals in the corporate world (and none in the real estate development arena).  In a bad year, the Cliffs spends more than $10 million on advertising and marketing, and the celebrity-studded BMW event was at the core of the firm's strategy, attracting the likes of hockey great Wayne Gretsky and his wife, actress Janet Jones, Kevin Costner, Dennis Quaid, Samuel L. Jackson, "professional" amateur golfer Joe Pesci (he seems to play every pro-am) and other recognizable names from the entertainment and sports

fields.  People with the capacity to spend more than $1 million on homes appreciate the cachet of rubbing elbows with the quasi-famous, and the Cliffs marketing folks are particularly astute at cachet building.  Their communities offer expensive amenities to beat the band, none more touted than the first Tiger Woods course design in the U.S., to debut next year in one of the Cliffs communities.
But the switch of the annual BMW Charity Pro-Am from the Cliffs Valley, Keowee Vineyard and Walnut Cove courses to Brights Creek, Carolina Country Club and Thornblade reveals one of the Cliffs few weaknesses in attracting urban(e) residents; Cliffs Communities are, for the most part, remote from any cities of consequence.  Cliffs Valley is a good half hour from Greenville, and Keowee is more than 45 minutes.  In making the announcement last year of the switch of venues, Bobby Hitt, president of South Carolina Charities, Inc., and Chairman of The BMW Charity Pro-Am, said, "The new courses will attract more fans and sponsors...It will be a much more community-based tournament."  The Cliffs are essentially communities unto themselves.
In a visit to the area a few years ago, I played the Thornblade Club, which is at the core of a neighborhood of nice homes, mostly brick, whose market values average in the mid to high six figures. Professional golfer Jay Haas owns a home adjacent to the course; his son, Jay Jr., is trying to make his way on the Nationwide Tour, and he may have no better chance than at his home course.  PGA tour player Lucas Glover also honed his early golf game at Thornblade and former LPGA player Dottie Pepper is a member.
Some of the homes with the best views of the course and the nicest acreage fetch over $1 million.  The course is classic Fazio, with funneled fairways and strategically placed bunkers to catch only the most errant shots.  The club is family oriented, and membership initiation fees of $20,000 seemed reasonable for the quality of the golf and the other customary club amenities, including an excellent clubhouse with wonderful food; the membership cost is about $100,000 less than at The Cliffs (although Cliffs membership includes eight courses).
The 5,000-acre Bright's Creek community also features a Fazio layout and is located just over the SC line in North Carolina (oddly, farther away from Greenville than is Cliffs Valley).  Lot prices start just below $200,000, with homes starting in the high six-figure range.  Carolina Country Club is located in Spartanburg, home to the BMW plant that is responsible for so much positive economic activity in the area.  It features an older Tom Jackson design (1984) in a planned community of homes that range in size from 2,400 to 8,000 square feet.
Thornblade is wonderfully manicured, with mature trees that give it the feel of a classic course, as does the architect's layout.  And although the houses are very much in view on most holes, the out of bounds stakes were not obnoxiously close.  Tournament leader David Mathis shot a 68 yesterday at Thornblade after two 65s on the other courses.  If you have cable television, you can see the course for yourself today on The Golf Channel during the final round.
We know a fantastic real estate agent in the area, a member of Thornblade actually, and can put you in touch if you would like to know more about the neighborhood and the golf course. 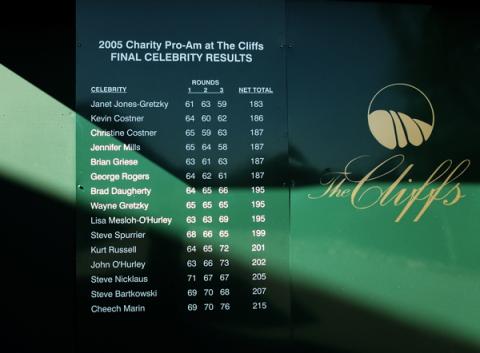 After seven years, the BMW event, and the celebrities it attracted, has moved closer to Greenville.

More in this category: « Review: Cherokee Valley, Travelers Rest, SC Caledonia's not-too-evil twin brother »
back to top
Back to Top