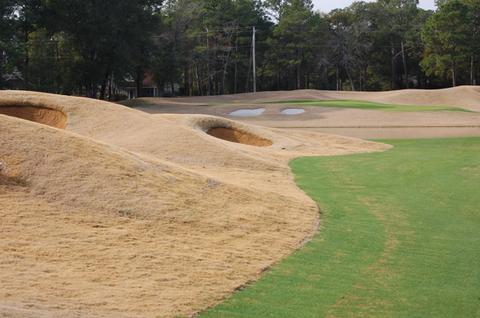 Pot bunkers at The Founders Club appear easy to get into and tough to get out of...


You would think that the Myrtle Beach area needs another new golf course like the U.S. needs another Presidential candidate.   After more than a dozen course closures along the Grand Strand over the last five years, the result of rising real estate prices and brutal competition among too many golf courses, things have finally settled down.  Indeed, we have noticed that green fees are up and choice tee times for the busy March/April season are spoken for already.  That is not great news for bargain-seeking golfers but a boon to the stability of the local golf scene.
Yet the Classic Golf Group, which runs a handful of mid-level courses in the area, took advantage of the distress of the Strand's southernmost

The pot bunkers appear to have been made by meteorites.
course and bought the venerable Sea Gull Golf Club two years ago and announced a total makeover.  After a severe drought this past summer forced the new owners to suspend plans to open in September, the course is now set to open next month.  From my drive around the Founders Club today, patient local and visiting golfers will be well compensated.  The course is in great shape and the re-design by Thomas Walker, a member of Gary Player's architecture firm, has taken great advantage of the existing lakes and wooded areas, and added some dramatic and well-placed bunkers.  A lot of dirt appears to 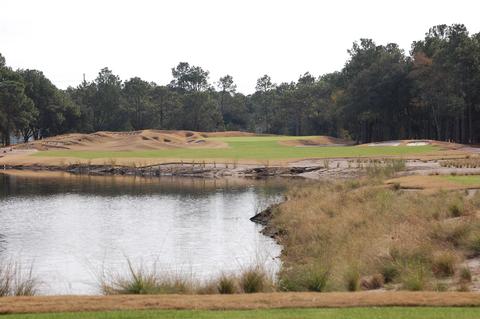 have been pushed around to create the elevated and severely contoured green complexes, and a lot of sand trucked in to create wide expanses of sawgrass-punctuated waste bunkers.  At the old Sea Gull, you could roll your ball onto most greens; those days are now over.  Cost of the redesign is estimated at $7 million, but because of the delayed opening, the true cost is probably considerably higher.
Sea Gull opened originally in 1970 in a neighborhood of mostly modest homes that, today, sell in the low to mid six figures.  Many cart paths on the course cross neighborhood streets.  This is not a planned community by any means, and the styles, condition and prices of the homes run the gamut.  A small (1,500 square foot) home on Hill Drive that backs up to the course is listed at $245,000.  At the other end of the golf course, and the market, a 6,500 square foot ranch is listed for $789,000.  There are plenty of homes for sale in between.  Unless you have your heart set on private club membership, you could purchase the Myrtle Beach Golf Passport for just $39 a year and play The Founders, Pawleys Plantation (across the highway), Heritage (just north), Caledonia and True Blue (both within five minutes) at significant discounts.
The new Founders clubhouse is small but more than ample for a daily fee course.  The large practice green is just behind the first tee.  The Best Western chain purchased the adjacent motel last year and has spruced it up in anticipation of the buzz about The Founders and the expected number of package golfers arriving this spring.  The ninth hole, whose green is just in front of the hotel and parallel to Highway 17, is a doozy of a par 5.  From the blue tees, which are suggested for the 5 to 10 handicapper, the narrow hole plays 534 yards.  After 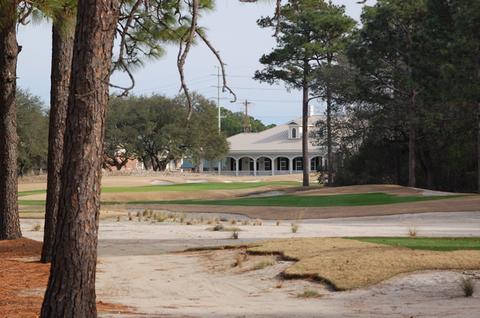 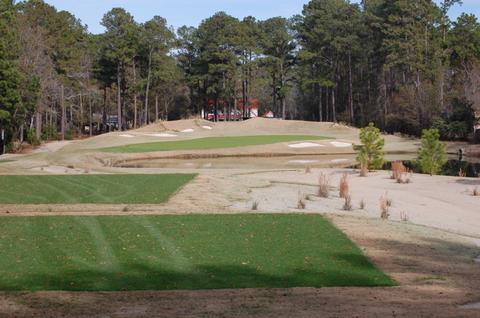 The par 3s I saw were all-carry affairs over water or sand, sometimes both.

More in this category: « Is Myrtle Beach's image changing? Norman conquest: Reserve shows Shark restraint »
back to top
Back to Top