According to an article today by Keith Jarrett in the Asheville Citizen-Times, current owners of The Cliffs Communities in the Carolinas say any hopes of Tiger Woods completing his first American design at the Cliffs at High Carolina community are gone.

“His deal didn’t make it through bankruptcy,” said Brett Johnston, CEO of Cliffs Land Partners. “We don’t have any deal with Tiger. We don’t have any relationship with him, business or otherwise.” (Otherwise?)

"[Tiger's] deal didn't make it through bankruptcy...We don't have any relationship with him..." -- Cliffs Communities new owner
Asheville. Originally marketed as a “walking-only” course to buttress Cliffs Founder Jim Anthony’s emphasis on wellness, the developer later announced, as the economy was unraveling and with it sales at High Carolina, that carts would be permitted. That about-face turned out to be the least of The Cliffs’ marketing problems with High Carolina.

At about the time The Cliffs erected billboards in the Asheville area featuring a giant-sized Tiger Woods indicating what “inspired” him at High Carolina, the global star ran his SUV into a tree just outside his Florida home on Thanksgiving night 2009. (At least one of those billboards is still standing.) The resulting bad publicity about his personal peccadilloes, his high-profile (and expensive) divorce, and the erosion of his golfing skills from which he has only just recovered three years later, combined with the sinking economy, further exacerbated The Cliffs problems in selling lots at High Carolina that were priced at $1 million and higher.

Although the star’s golf architecture business, Tiger Woods Design, saw its first three global projects (Dubai, Mexico and High Carolina) halted because of the economy, it is back in business with a golf course in Cabo San Lucas, Mexico, where ground was broken last October. Winning again solves a lot of problems for Tiger, who has recouped most of his annual rate of income that he lost during his fall from grace. But it is too late from High Carolina. The new Cliffs owners are fully non-committal about the future of the community, with or without a golf course, although the status of the welcome sign at the gated front entrance to the community may be both revealing and symbolic. How much, after all, does it cost to take a scythe and lawn mower to the tall weeds around the sign?

“We will wait two or three years and see where we are,” Johnston told reporter Jarrett of the Citizen-Times. “That will tell us a lot.”  (To read the full Citizen-Times article, click here.) 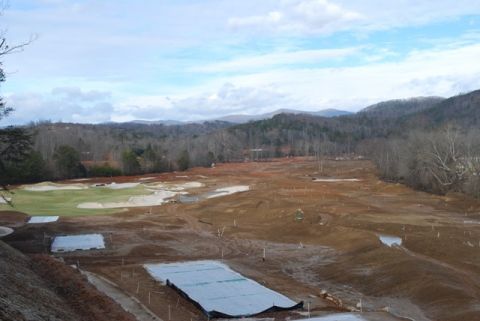 A Tiger Woods golf course at The Cliffs Communities will never open, but in the next few months, The Cliffs will debut Gary Player's layout at Mountain Park.  (Photo looking down the 17th fairway from the tee taken late last year.)

More in this category: « Champion Hills celebrates the number 25 One way to own a home on Shinnecock, Pine Valley or Winged Foot »
back to top
Back to Top