This is the second part of our review of River Landing in Wallace, NC.

River Landing provides a few extras not typical of most other golf communities.  It may seem a small thing to the culinary challenged, but natural gas lines run through the community, something that for those of us who take cooking seriously could provide the tiebreaker in a choice between communities.  Those at-home chefs will find themselves with access to special wines, as River Landing plans to provide grapes from its adjacent Vineyards property for the popular Duplin Winery, which is a short drive from the community.  (Duplin’s owners live in River Landing.)

The Murphy family also owns and runs the large Mad Boar restaurant, which features lots of wood and colorful glass panels.  Murphy’s Irish Pub is adjacent, offering club members an alternative to the comfortable bar in the River Landing clubhouse.  For a small town, Wallace offers all the services you would expect from a suburban location, with a hospital within 15 minutes of the community and supermarkets and a Walmart within five minutes.

One especially nice touch is the cottages at the golf course and the rooms on the top floor of the clubhouse that are available to guests of members and residents at prices ranging from $99 to $150.  For those who prefer chain motels, the Murphy-family-owned Holiday Inn Express just outside the gates of River Landing is among the most lavish in the chain, and offered at discount rates to residents.

The two golf courses designed by Hilton Head’s Clyde Johnston feature lots of water in the form of lakes and the branch of the Cape Fear River.  They are good enough to have hosted eight U.S. Open qualifiers and numerous state amateur and collegiate golf events.  The courses, which are open year round, feature bent grass greens and Bermuda fairways.  The River Course opened in 1996, just before the first real estate sales; the Landings Course followed in 2006.  The North Carolina golf ratings panel has named the finishing hole on the River course, which features a waterfall and all carry over water to the green, and #9 on the Landing course as among the best par 4s in eastern North Carolina.  The same panel rated River Landing’s practice facility the best in the eastern part of the state.

Although shorter from the tips than the Landing course by nearly 200 yards, the River Course (6,942 yards) sports a much higher slope rating (141) than the Landing (132), but a lower course rating (73.5 compared

with 74.0).  The implication is that the River Course will be more of a challenge for the bogey golfer than the Landing, but the newer course might push the single-digit handicap player a bit harder.  The low score during U.S. Open qualifying last year on the Landing course was a 68.

Unusually cold weather prevented me from playing either course this trip, but a quick ride on the golf course gave me an opportunity for a few photos (things will look a lot greener in two months).

For a cold night in February, I noticed a lot of activity in the clubhouse when I dined there.  My waiter told me that the Murphy family was hosting a thank you dinner for Wilmington doctors who had provided relief in Haiti after the January earthquake.  They were flown there on the Murphy Family Ventures airplane, courtesy of River Landing founder Wendell Murphy.  River Landing President Dell Murphy accompanied the group to Haiti.  Developers like that make River Landing both a nice and a good place to live.

Please contact me if you would like to arrange a visit to River Landing.  The community has an attractive overnight stay program that includes accommodations on property, a round of golf, access to all amenities and a dining certificate for the clubhouse.  If you are free the weekend of March 26 – 28, River Landing is hosting a special “Wine Escape” that includes two nights lodging, a welcome wine tasting, a “taste of the south” wine dinner, golf and access to amenities, all for $139.  The only requirements are that you take a tour of the property and that you attend with your spouse (unless, of course, you are not married).  I am happy to contact River Landing in your behalf and to send you additional information. 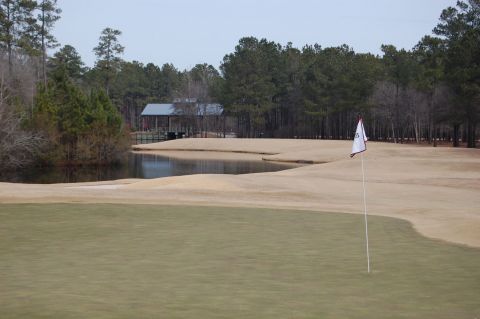 Designer Clyde Johnston shaped his courses at River Landing around its many ponds and a branch of the Cape Fear River.