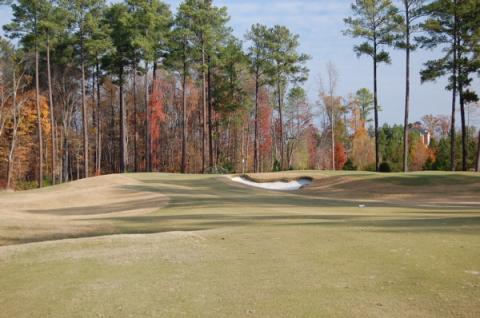 The exceptionally playable and well conditioned Finley Golf Club at the University of North Carolina (Hole #2 shown) is one of 107 public golf courses within a half hour of Chapel Hill, NC, all playable most days during the winter.  You can't say that about the golf courses in Money magazine's "best" town in America, Plymouth, MN.

Money magazine has just published its annual rankings of best 100 cities, and some of the finest places to live in the southern U.S. are off the chart.  Once again, a little drilling down through the numbers (and some logic) reveals that such rankings should always be taken with a lump of salt.
Only two towns in North Carolina - Cary and Chapel Hill - made the list and none from South Carolina or Georgia.  I have had Chapel Hill on my mind

16 movie theaters and 107 public golf courses within a short drive seem more than enough for a small town.
recently; I helped lead one of our readers to Governor's Club, a fine local community whose 27-hole Jack Nicklaus layout is one of the most challenging in the Carolinas. Chapel Hill ranks 65th on the Money list, but a comparison of the university town to the top 10 on the list shows just how squirrelly the numbers are.
The rankings, which this year only included towns with populations of 50,000 to 300,000, took seven categories into account:  financial, housing, education, quality of life, leisure and culture, weather, health, and "meet the neighbors" (demographics).
In the financial category, Chapel Hill ranks behind the top 10 communities because of its higher taxes and lower job growth.  A retiree to the area, though, might ignore the modest job growth numbers; the comparatively higher state income tax, however, is tougher to ignore.  But housing prices and property taxes are lower in Chapel Hill than in the top towns; the lower property taxes tend to neutralize the effects of the income tax (especially if a retiree on a fixed income is in a low bracket).
In the education category, Chapel Hill, surrounded by major universities and some of the best public schools in the nation, should rank highly, and it does in terms of quality; but its 11 institutions of higher learning ranks way behind the average of 49 for the top towns. (Note:  It appears the size and range of offerings of the University of North Carolina does not count on the list any more than, say, a two-year college.)
Crime data, which is always difficult to interpret accurately, hurts Chapel Hill's quality of life rating a little.  Property crime incidents run at the rate of five per 1,000 total incidents, compared with an average of two incidents for the top 10 towns.  Personal crime rates run 44 (Chapel Hill) to 25 (top 10) per 1,000 incidents.  College students being college students, one has to assume some of the crime data is skewed by drinking-related incidents.  On all other quality of life measures, including air quality, average commute time and percent of those walking or bicycling to work, Chapel Hill does better than the top 10 towns average.
The leisure and culture category is perhaps the one that skews the results the most, and is the most personal to each of us.  In a town like Chapel Hill, population 50,000, 16 movie theaters within 15 miles seems like more than enough to anyone but a film critic, but that number pales against the average of 51 for the top 10 towns.  And in other categories like restaurants - 1,160 in Chapel Hill compared with an average of 4,094 in the top towns - bars (70/408), libraries (26/89), museums (5/13) and public golf courses (107/316) within 30 miles, the numbers appear to be biased against the smaller Chapel Hill.  Sometimes less is more when the quality of the fewer provides better choices than the many, and my visits to Chapel Hill tell me there is plenty to do, especially on the local campuses of UNC, Duke and the other wonderful schools in the area.  And the restaurants I've dined in are excellent as well (try Allen & Sons barbecue the next time you are in the area).
Chapel Hill's weather is right on the money with the top towns, coming in within one degree of the high temperatures for summer (88.8/87.8) but a good five degrees above the top 10 towns' low temperatures in the winter
Where would rather play golf in January?  Chapel Hill or Plymouth, MN?
(28.4/22.9).  Health, which measures the percent of residents with a health plan, body mass index, and diabetes and hypertension rates, is essentially the same as the top 10.

In terms of neighbors, Chapel Hill is a much younger town than the more family-oriented top 10 towns, with a median age (26.5) almost 10 years younger, a decidedly higher rate of college educated citizens, a marriage rate more that 20 percentage points lower than the top 10, and a slightly more racially diverse population than the higher ranking towns.  I was surprised at the relative low average age, mindful that many retirees have chosen Chapel Hill in recent years, but perhaps the census numbers are taken when the universities are in session and many of the students are being surveyed.
Overall, Chapel Hill is a little more expensive and a little more "small town" than the higher-ranking cities on the Money magazine list. And compared with the magazine's single best place to live in America, Plymouth, MN, with its 281 golf courses to Chapel Hill's mere 107, where would you rather be playing golf in January?  A true golfer in Minnesota will have the urge to fly to some warmer place to get in some winter golf.  That takes money and erodes any tax advantage a Minnesotan might have over the North Carolinian.  Indeed I have met as many Minnesotans on the golf courses of Myrtle Beach in March as I have North Carolinians.  These rankings are all relative.

If you are interested in a golfing community in the Chapel Hill area, you will have some wonderful choices.  In addition to Governor's Club, I have visited and reviewed Chapel Ridge and the Preserve at Jordan Lake.  I have excellent contacts in the area, so please do not hesitate to email me (use the Contact Us button at the top of the page) if you would like more information or to be put in touch with an outstanding real estate agent I know in the area.  There is no charge or obligation for the advice. 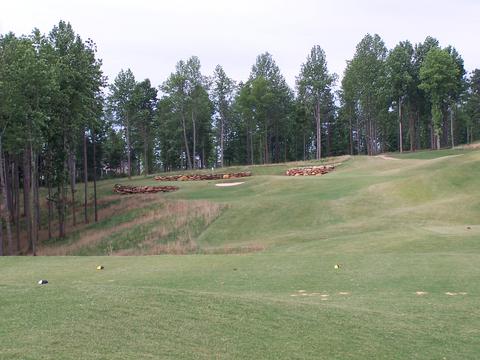 Chapel Ridge's course was designed by Fred Couples and features sloping fairways and some forced carries, but overall it is a fair test.  The par 3 6th is one of the more challenging holes.

More in this category: « Tough ones: Tobacco Road #9 Developer's belly up is heads up for rest of us »
back to top
Back to Top