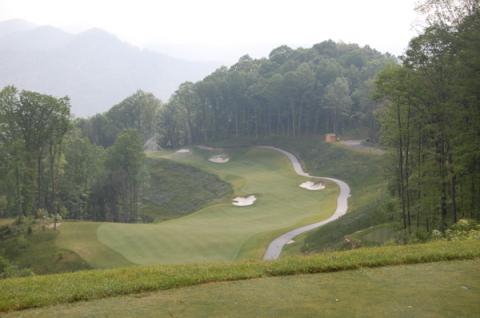 The longest and perhaps toughest hole at Bear Lake Reserve is the 445 yard 1st.

Most dedicated golfers recoil at the notion of membership at a nine-hole golf course, especially one that plays to a measly 1,900 yards and par 29.  For most of us, golf is a game divisible only by 18, and par for the course is somewhere between 35 and 36 per nine holes.  No fractional memberships for us.
But you just might change your mind after a spin around the soon to open nine at The Summit Golf Club at Bear Lake Reserve, near Tuckasegee, NC.  At an altitude of 3,800 feet, the dramatic routing by Nicklaus Design group is both high and mighty.
Bear Lake's developers say that golf is "just another amenity" at the four-year old community.  Perhaps, but a tour of the course with Director of Golf Bo Alexander is persuasive that Terramesa Group, which purchased the

property earlier this year from the original developers Centex Destination Properties, hopes to reel in golfers to the water-oriented property.  They have lavished a lot of attention and made a significant investment to produce some impressive eye candy golf that may just overcome the nine-hole stigma.
The cost to build The Summit amounted to about $1 million per hole, or $9.5 million.  That compares favorably with one of the most celebrated regulation courses in the area, Mountain Top, where the Discovery Land Group spent $21 million for its 18 holes.  The Tom Fazio-designed Mountain Top, Alexander says, would be the likely choice of serious golfers from Bear Lake who feel the necessity to add membership in an 18-hole club.
Any of the nine holes I saw at Bear Lake could be the "signature" hole at most courses.  I didn't get to play the course, which opens July 1, but it was obvious that the average golfer with an accuracy problem might very

well go through 18 holes worth of golf balls in the span of 9.  From the tips, the longest hole, #1, plays 445 yards and the shortest a mere 91 yards. I hope the accompanying photos do justice to how much danger lurks on most shots at Bear Lake.
A pristine 500-acre lake is in the name and at the core of Bear Lake Reserve.  Canoes and kayaks dotted the lake during my visit, and I watched a father and two young children placidly fishing from their canoe.  For now, powered boats are permitted on the water but the guess locally is that the state will put restrictions on motor boats in the coming years, especially as more and more people move to Bear Lake Reserve and across the lake.  The lake, the result of damming the Tuckasegee River in the 1950s, is also accessible to the public.
Bear Lake dominates the views from many of the 2,100-acre community's properties and from the rustic clubhouse - the Lake Club -- where couples and families alike gathered last Saturday. Inside, the Lake Club is large and warm, all hewn wood and stone and dramatic angles. Bear Lake does not attract much traffic in the winter, but food is served year-round by a young and enthusiastic wait staff.  The food I had at dinner and lunch was well prepared.
Bear Lake's other amenities have a strongly outdoors orientation.  Fifteen miles of hiking trails thread their

way through the community.  Helpfully, Terramesa has published a "field guide" to the hiking trails, identifying their routing and degrees of difficulty ("easy," "moderate," and "strenuous").  A fishing village is also planned although it doesn't take a village today to pull brown trout and small mouth bass from the fertile fishing grounds on the lake.
Bear Lake is somewhat remote, with no commercial airport nearby, but at about three hours from Atlanta and Charlotte, it certainly is close enough to make long weekend stays practical.  The community's entrance is at the end of a country lane three miles from State Road 107; the last quarter mile before Bear Lake's entrance is unpaved, a bit of a turnoff but, according to Sales Exec Jeremy Sessoms, the state plans to finally pave it in the coming months.  The community is best approached from the north; to get to Bear Lake from the south involves a trip along the winding and often crowded two-lane Highway 64.  I drove it during the day but would not look forward to it at night.
Highway 107 continues north past Bear Lake to the little town of Tuckasegee and on to the more substantial Sylva.  Sylva is home to Western Carolina University, and consequently the area doesn't want for a little culture

and entertainment.  Western Carolina, nestled into the local mountains, is home to 9,000 students and some pretty good sports teams. (Bit of trivia:  In 1980, Western Carolina hoopster Ronnie Carr became the first college player to make a shot from outside the three-point line.)  Director of Golf Alexander has invited Western Carolina's golf team to use the Bear Lake practice facilities.  They will be pleased indeed.
Land prices at Bear Lake, while not inexpensive, are certainly in line with other communities that feature impressive mountain and lake views.  But the most significant expenses are in clearing land, blasting rock and laying foundations against the hillsides where, of course, many of the best views are found.  The developers have wisely factored in the costs to build and priced the home sites comparatively.  It isn't unusual, for example, for a flat piece of land with mountain views to be priced a couple of hundred thousand dollars more than a lot with a sidehill lie but a similar view.  In the end, the total costs work out to be about the same.
Home sites at two acres and more begin around $250,000 for a modest mountain-view lot and move up to around $600,000 for the best vistas.  Lake view property is slightly higher and one-acre lakefront sites, with

dock, can exceed $1 million for the choicest positions.  For those who do not want to make a full commitment, the many cottage communities that dot the hillside might fill the bill.  I stayed in Cottage 77 in the Whispering Falls neighborhood, a cluster of comfortable, Craftsman-style cottages.  My cottage, owned by the Edwards family of Tulsa, OK, and rented out by Bear Lake in their behalf, featured three bedrooms and as many bathrooms. (Note:  As is my custom, I paid for my accommodations.)  Cottages begin at $500,000 for a two-bedroom unit and reach $750,000 for the four-bedroom versions.  Some are available furnished.  As you contemplate a future purchase, you could stay in one of the cottages or handful of condos that look down on the lake.  The tariff is $360 per night in summer and includes access to all amenities, including the golf course.
Bear Lake Reserve, Tuckasegee, NC.  828.293.3455.  Course designer:  Nicklaus Design.  Course yardage:  1,900 yards, par 29.  Ratings and slopes to be determined.  If you are interested in property at Bear Lake Reserve or additional information, contact me and I will be happy to put you in touch with someone who can help. 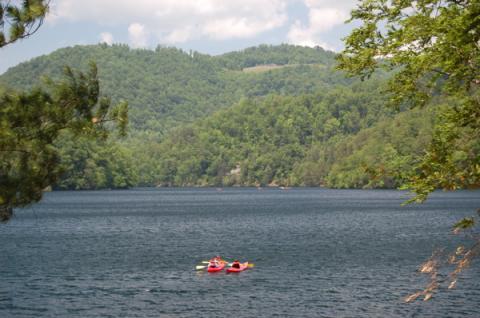 From Bear Lake Reserve's Lake Club, parents can sip a drink and keep a watchful eye on their water-loving children below. 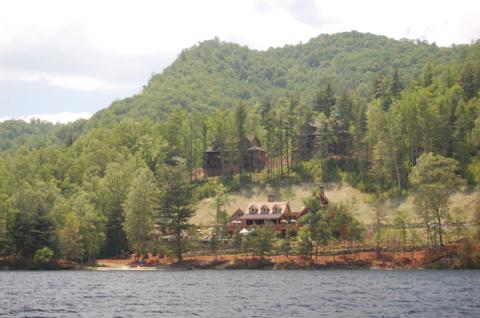 The Lake Club is the social center of Bear Lake Reserve. Behind and above the club, condominium units are available for purchase or rental.

More in this category: « For just $500, membership in a course Trump's man designed Review: Connestee Falls, Brevard, NC »
back to top
Back to Top