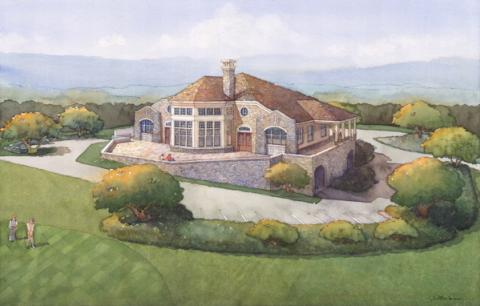 The Coves clubhouse will sit on top of the Round Mountain with views to as far as 50 miles. (Image supplied by The Coves)

Blue Ridge Mountain golfing communities are trying to hold their own in this tough housing market and in the face of brutal competition in western North Carolina.  Some new community seems to open in the Carolina mountains virtually every week.  You know the competition is fierce when you hear national radio ads for some of these communities every day, as I do on my car's XM Satellite Radio.
Next week, during a brief trip to the mountains, I will visit and report on the recently opened and remote Bear Lake Reserve, as well as the more established Connestee Falls, located near the artsy town of Brevard.  For the time being, though, here are some notes and observations from a conversation with Bruce Dickinson, general manager at The Coves at Round Mountain, a year-old property in the foothills of the Blue
One of our readers purchased three lots at The Coves as investments.
Ridge Mountains, six miles from Lenoir and about 30 minutes from Hickory, NC and Blowing Rock.
The Coves has a somewhat unusual price/amenities equation.  The promised amenities, including two equestrian centers, a spa and a designer golf course (Hale Irwin), aim to compete with such upscale competitors in the area as Queen's Gap and Laurelmor.  Yet with 1 to 5 acre home sites beginning around $70,000, and lots with mountain and golf views in the mid $100s, The Coves appears to be a bargain

compared to its competitors.  (Caveat: I haven't visited The Coves yet, nor its competitors' properties, so take the price/amenities comment with a grain of salt for now).  Nevertheless, you may have read here some weeks ago that one of our readers, a Florida real estate agent who had done thorough research on mountain communities, was so impressed during his visit to The Coves that he purchased three lots at an average of $125,000. The Coves, he believed, offered the greatest upside as an investment.
We spoke with the Coves general manager last week to get a feel for how things are progressing on site.  Dickinson, who has more than 20 years experience helping to establish new developments, arrived at The Coves from a community on the Georgia coast.  We asked him if he hit any traffic from Floridian "bounce backs" on his way north; these bounce backs, or half backs, have decided they have had enough of the heat and traffic and hurricane threats in the Sunshine State.
"We see a number of them here at The Coves," Dickinson said.  "Some are moving here full time, and some intend to start with a second home and maybe move here permanently later."
We mentioned that we had read about certain thermal idiosyncrasies in the Blue Ridge Mountain valleys, and that it was possible to ski and play golf on the same day in January.
"That's absolutely true," said Dickinson. "I have skied in the morning and played golf in the afternoon."  The ski area is about 40 minutes from The Coves.
The Coves is the first golf community by The Archer Group, which has developed other communities in the southern U.S.  They chose to delay the golf course for a few years; construction begins in a few months and the course will open in 2011.  Although such a delay makes sense in terms of cash flow, the risk is that the lag will keep buyers on the sidelines waiting for the amenities to be built.  However, given The Coves' reasonable price points and the recent announcement of Hale Irwin's involvement, any affect on sales will likely be minimal.
Irwin's lead architect, Rick Robbins, will design The Coves' course, with input from the former U.S. Open champ.  Although Irwin's design reputation and experience do not rise to the levels of his former PGA competitors Jack Nicklaus and Arnold Palmer, his name recognition among baby boomer golfers is solid.  No details about the course are available yet, but if the design reflects Irwin's personality, it will be brawny and demanding.  The course will open with access to the public; perhaps one day, when most of the anticipated 1,700 residences are built on the 3,600 acres at The Coves, members will compel the club to go private.
The Coves community, Dickinson says, should appeal to golfers and horse lovers in equal measure.  Two equestrian centers are on the way, one due this fall for western riders and one for the more formal English riding next year.  Riders will have access to 25 miles of trails inside the community's gates.  A 160-acre lake and five miles of frontage on the Johns River will form the centerpieces for those drawn to water; a kayak and canoe shed is almost complete, according to Dickinson.  Of course, like any self-respecting community that appeals to baby boomers, The Coves is building tennis courts, pools and fitness centers, as well as a sleek clubhouse.  A "world class" spa is promised as well.
Some condominium and villa style housing will be built at The Coves, but single-family homes will predominate.  To date, The Coves has sold 120 home sites, meaning that plenty of choices remain.  A week ago, the developers released 70 home sites along the river at prices between $70,000 and $250,000.  From other points on the property, the developers promise 50-mile mountain views on clear days.  At just 10 miles or so away, Walmart and other conveniences are a lot closer.
The Coves at Round Mountain, Lenoir, NC.  877-815-2466.  Web: www.thecovesnc.com
If you would like an introduction to The Coves or to any other community in the western Carolina mountains, let me know and I will put you in touch with a qualified agent.

More in this category: « Review: Connestee Falls, Brevard, NC Great Scot: Thistle Club channels the old sod »
back to top
Back to Top