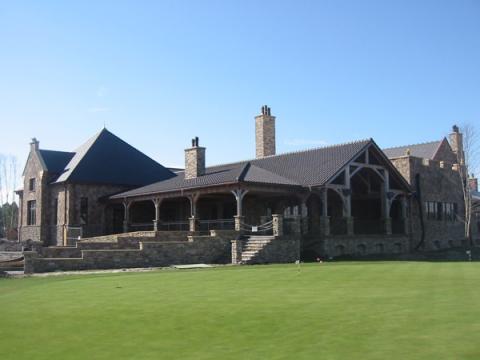 The soon-to-be-completed Scottish style clubhouse at The Thistle Golf Club caused one of our readers to be blown away during a visit.  The clubhouse, which will include a display of golfing memorabilia, opens in June. (Photos courtesy of Thistle Club)


The Scottish thistle is a beautiful but painful flowering plant.  Legend has it that a Viking marauder stepped on a thistle as he and his fellows were about to lay siege to a Scottish castle.  His cry of pain at the prickly plant warned the castle's occupants.  The element of surprise gone, the Scots repelled the assault.
A few centuries later, following the lead of Scottish football clubs and the original Thistle Club, a Scottish golfing society founded in 1815, a small

One of our readers was "blown away" by the Thistle clubhouse.
community in North Carolina chose the thistle for its name and what it represents to the people of Scotland - a "symbol of nobility of character as well as of birth, the wounding or provocation of [which] yields punishment." [Source:  Wikipedia].
That could explain why the Calabash, NC, version of the Thistle Club has touted itself as "ferocious but fair."  Designed by the hot Tim Cate, whose laudable if peculiar predisposition is to work on only one course at a time (Mr. Nicklaus take note), the 27-hole Thistle is thought by frequent players in these parts to be the best golf course between Myrtle Beach and Wilmington.  At its longest routing of 7,000 yards, the three 18-hole combinations play to a maximum rating of 74.9 and slope of 137.  The tees for the rest of us, at around 6,400, drop the average ratings to around 71.5 and slope to an average 132, a stern enough test for, say, a 12-handicap player.  The Thistle features most of the characteristics of other coastal courses, but with conditioning (especially the large greens) that are consistently praised by those who know the course.  Native coastal grasses, large sand bunkers and a number of lakes dominate the landscape.  The fairways are more lush than links like and sweep up Cate's man-made berms toward hollows and bunkers.

Time is on your side at The Thistle

only course on the Grand Strand - indeed the only one I know of - that spaces its tee times 12 minutes apart, not the customary eight or the less frequent but judicious 10 minutes.  According to the reports of Thistle golf veterans, the club scrupulously adheres to the 12 minute spacing and doesn't let anyone go to the first tee until the golfers in front have played their approach shots to green number one.  Rounds almost always take less than 4 ½ hours, quite a feat for any course on the tourist-infested Strand.  It shows that the owners of Thistle prize quality over lucre (compare the revenue lost when you send 20 people out to play per hour as opposed to 28 or more).

Thanks for the memorabilia

Not content with the reputation of the course solely, new owner Rusty Mackey commissioned construction of a dramatic new $10 million clubhouse that mimics the bold and majestic style of a Scottish castle.  Mr. Mackey even imported wood-framed windows, wooden doors and a carved wooden bar from overseas to ensure an air of authenticity permeates the dramatic structure.

Club "captain" and PGA professional Gene Weldon took me on a tour of the clubhouse one recent Friday morning after I was shut out of golf on the course (my bad; I didn't reserve a tee time during the busiest week of the golf season).  Mr. Weldon, the former longtime pro at a club in Myrtle Beach, proudly showed off the new building, which will open for business in June.  Because The Thistle still accepts public play, and will for at least the next few years, the clubhouse will be divided into a member section and

The Thistle Golf Club features tee times spaced 12 minutes apart, a generous concession in a golf tourist area.
public section.  No one gets short shrift as both sides of the clubhouse showed great attention to detail.  But members will receive those extra touches that justify dues and private-club status, things like a library, private dining room, covered patio deck and locker rooms, albeit small ones.  I was particularly impressed with a card room that will include a big screen TV and will be accessible all day and night for those insomniacs who feel the need to play poker or watch Sports Center at 2 a.m.

Unobstructed views of golf course, not the neighbors
The club also promises its members the opportunity to travel the globe with ESPN golf analyst Charlie Rymer; Scotland, Ireland and Bandon Dunes are on the schedule.  One final touch:  When Mr. Mackey purchased the club, he also bought the previous owner's vast collection of golfing memorabilia.  Woodworkers have been busy building the museum-quality display cases that will show off the artifacts.
The gated Thistle Estates, formerly called Thistle Downs (which made the place sound like a racetrack), follows the same formula as the golf course - quality first, with no apparent corners cut.  Just 145 home sites are available in the first phase, and with only a handful of exceptions, no one house will have a view of another.  Virtually all will be adjacent to the course, with views of fairways, greens and tees but not of any houses on the other sides of the holes.  About half the properties had been sold at the time of my visit a few weeks ago, and those remaining to be sold were priced from $245,000 to $525,000.  The inherent quality of the fledgling community has attracted people, like TV host Maury Povich, who can afford the highest home site prices in the Calabash/Sunset Beach area (except for those directly on the oceanfront).

years and the termination of your membership.  Until such time as the club actually does go fully private, members get priority tee times.  Full family dues run just $325 per month, and $225 for an individual.  To inspire real estate sales and memberships, The Thistle Golf Club is not charging dues until January 2010, a savings of up to $6,000, to anyone who buys in now.
Owner Mackey promises that once club memberships are fully subscribed - a total of 500 members - he will offer the "exclusive right of first refusal" to purchase the course, clubhouse and supporting facilities to the club members.  That as much as a decade away, but some members must be already dreaming of the day.
A couple of weeks ago, I sent one of my readers for a short visit to Thistle Estates (as well as the nearby Ocean Ridge Plantation and to St. James Plantation, a half-hour north).  He and his wife are looking for a lot they can build on in three or four years.  Mr. Weldon took him around the Thistle clubhouse, and our gentle reader phoned me afterwards to say that he was "blown away."  He won't be able to persuade his non-golfing wife to live in Thistle Estates, whose amenities other than golf can't match the larger plantations in the area, but if he winds up building a home nearby, he pretty well has his mind made up about where he will become a member.
The Thistle Club, 8840 Olde Downs Drive, Calabash, NC.  800.571.6710.  www.thistlegolf.com.   If you would like more information or an introduction to an agent at the Thistle Club, or to a qualified agent in the area, please do not hesitate to contact me (use the button at top of page).  There is never a charge or obligation for this service. 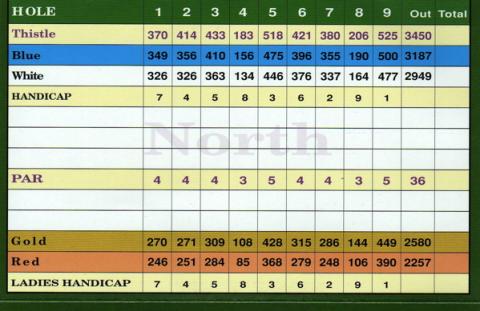 More in this category: « New mountain community using sharp pricing to try to scale competition Golfer retirees live large at sprawling St. James »
back to top
Back to Top