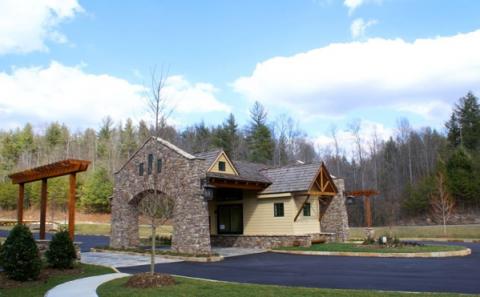 First things first:  The Coves built a welcoming gate before anything else.


I spoke with a local real estate agent yesterday in Pawleys Island, SC, about the current market there.  He confirmed from "the inside" that things were slow.  Real estate agents rarely admit their business is in the dumper, as if they might be excommunicated by the National Association of Realtors, that pantheon of exaggerated optimism.  This agent, whom I have known casually for a few years and who covers the south end of Myrtle Beach, indicated people in the market are asking way too much for their primary homes.  Combine that with all those potential northern customers suffering from the same inflated sense of their

The current housing market is changing lives as well as plans.
homes' worth, and the Myrtle Beach market, like so many others, is in a bit of gridlock.
My agent friend was looking to the market to rebound early in 2009. That seems a little pie in the sky to me at this point, given the size of the foreclosure market and that the steroids being injected into the financial system by Bernanke and his merry band of re-engineers aren't stimulating many people to buy homes.  And there is the real threat that, as the FRAM oil man predicts, we are going to pay eventually for stalling the inevitable.

We were having our conversation, by the way, at the local golf course, where the agent was working temporarily at the bag drop and in the pro shop.  The current real estate market is changing lives as well as plans.  But some agents, those smart enough to have banked some of those commission checks they made in the roaring ‘90s, have switched hats from the sell side to the buy side.  Rather than sitting around waiting for sellers to list their homes at inflated 2005 prices or for the occasional buyer to show up at their doors, they are out there trolling for bargains and investing themselves in properties they consider under-priced.  If anyone should know bargain, they should.
One of them, an agent in Florida and reader of this blog site, just completed the purchase of three properties at The Coves, a fledgling community in the foothills of the Blue Ridge Mountains.  He bought on his first visit.  He confirms what we reported here some weeks ago, that Hale Irwin will design the golf course at The Coves.  Here is what our correspondent had to say about The Coves, verbatim:
"The Coves is impressive!!  Huge million-dollar entrance, the river, and the views are all amazing.  I could have sworn I was in a million dollar a lot development.  I bought three lots, two by the future golf course and one by the river.  Total, I paid $375K and will be closing within the next 30 days. They were telling me they will be announcing Hale Irwin as the designer in the next few weeks (prior to me even closing) and prices will go up about 20%.  So if all happens as they say, I just made a pretty good deal.  I only put 10% down, so that's a 200% return.
"Actually, I made the contract contingent on Hale Irwin being the designer, which means they must be pretty far down the road with him, and I just locked in the appreciation before I have to close.  This thing blows Ginn [Bobby Ginn, developer of high end properties] and Cliffs [the pricey Cliffs

Although there isn't much cash chasing bargains, our dedicated reader has a game plan.
Communities in the Carolinas] away in terms of value.  Granted, it's in the foothills, not highlands like Cashiers, etc., but I don't see how the others compare for the price.  Most of the other developments are still selling off renderings, but these guys are actually building it before they sell it.  Their top point, called "Davis Mountain," has 360-degree views of Table Rock, Round Mountain, Grandfather Mountain, the Blowing Rock, etc.  None of the other projects had those views.  Again, I must say, I was blown away..."
"I plan on holding a few of these lots for 3-5 years, so there will be more carrying and closing costs in it, but overall, there is no other development out there that I could have worked the same margins on.  In fact, most of these guys [competing developments] are having a hard time raising prices in this market because they are already at the top."
In strong markets, some developers compel purchasers of land to build a home within two years.  I spoke with the folks at Wakefield Plantation, near Raleigh, the other day, and they are holding to that policy.  Of course, Wakefield, which sports a private TPC course on property, is almost built out, and Raleigh is still a magnet for corporate transfers.  New, more remote developments like The Coves, which are investing in infrastructure and spec homes, need to generate cash and can't be too choosy about terms.  An abundance of speculators, of course, would be a problem for any community, but in this market, there just isn't that much cash chasing bargains.  Our dedicated reader has a game plan, and I look forward to keeping an eye on his progress in the coming months.
The Coves is located in Lenoir, NC, midway between Blowing Rock and Hickory, about 25 miles from each.  Its developer, The Archer Group, has built communities throughout the southeast.  If you would like an introduction to The Coves, please contact me.

More in this category: « Marines keep communities spit polished Hairy night on Bald Head, but I still liked it »
back to top
Back to Top