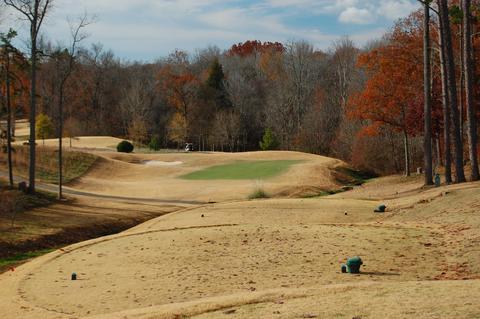 Target golf:  When fairways are dormant, greens can look like bulls eyes.

If you are as old as I am, you just might remember the gasoline station wars of the 1950s.  One gas station would lower its prices and the one across the street would follow suit, undercutting the competition by a dime a gallon.  Then the other competitor would undercut by another dime and, before you knew it, gas was something like 19 cents a gallon.
The Saudis won't let that happen today, but golf courses are under no such price controls.  When you consider how expensive it is to maintain a course, $40 or even $50 green fees (cart included) seem like a zero-sum game.  Clemmons, NC, just outside of Winston-Salem, is a microcosm of the problem.  I am spending a few days in the area and, I have to tell you, it is great to be a daily fee golfer but it must be miserable to be a golf course operator.  In the last two days I've played top-notch golf for much less than $50 a pop.  In the words of former New York City retail huckster, the "prices are so low they are practically giving it away."
Yesterday I played the fine Nicklaus Design course at the Salem Glen Golf & Country Club, a place that looks and feels like a private club but, like a widow, is forced to take in boarders (aka daily-fee players).  By all rights Salem Glen should be private, except there is too much good and cheap golf in the area to entice enough members to the club.  It seems that $1,500 member fees and reasonable dues aren't enough, especially if you can play for $1,000 a year unlimited golf at Tanglewood Park, whose R.T. Jones Championship Course is good enough to have hosted a PGA Championship (1974) and other pro tournaments, including the Seniors Tour Vantage Championship.  I played Tanglewood's Championship Course today, and if I lived in the area, I'd gladly pluck down $1,000 annually to play it and its companion Reynolds course.
Salem Glen is not the only course in the Winston-Salem area in this predicament; there is Oak Valley, a newer Arnold Palmer design, the Meadowlands, a Hale Irwin track, and the private Bermuda Run, with two courses by Dan and Ellis Maples.  They are all begging for members.
The drive to the clubhouse at Salem Glen took me past some substantial brick homes on nicely landscaped lots, but on the drive into the un-gated community and throughout the round, I was amazed at how close some of the largest homes were to their neighbors, just 10 yards or so in some cases.  Home prices in Salem Glen run the gamut, from the low $300s all the way to $1 million.  The sweet spot appears to be around $550K.
For late November, the trees along the fairways and on the surrounding hills still showed some color, lovely burnt oranges and bronzes, but the fairways and rough had gone totally dormant.  It's refreshing that these courses in areas with an actual winter don't over-seed; the contrast between the cream colored fairways and bright green putting surfaces is attractive, and I could swear my 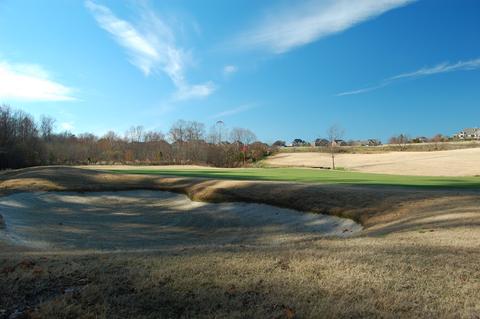 approach shots under such conditions are typically a little sharper, as if that green target is a bulls eye that forces just a little more concentration.
Salem Glen's clubhouse is warm and inviting, with a nice dining room, pro shop and bathrooms, although I found it odd that the members' locker room required a key code (I guess membership has its privileges.)  The golf (with cart included) was a ridiculous $22 to play as a member of the Private Club Network to which I belong by virtue of my private club membership in Connecticut; the regular walk-in rate at Salem Glen this time of year is an almost equally absurd $35 (the same price I paid at Tanglewood today).

I was impressed right from the start with Salem Glen's 400-yard par 4 starting hole, which presented a wide fairway and a few fairway bunkers on the right side about 225 yards from the tee.  The green was not very deep, making the downhill approach shot challenging if not too long.  The quick speed of the green was a surprise, even though I had stroked a few on the practice green prior to the round.  I liked that Salem Glen hadn't babied the greens as the weather turned cooler.  They were not furry in the least.
Here are some additional notes I took about my round at Salem Glen:  I didn't find a clunker hole among the 18, and a few were quite well designed.  The par 5s were medium long, but with some significant challenges that made attempts at reaching the green in two a dicey proposition.  On the 528 yard 4th, for example, a stream crossed the fairway 100 yards from the green.  On the 525 yard 7th, a large pond on the right ran from 125 yards to greenside, and the front of the green was pinched in, bunkers guarding both sides.  And on the 535 yard 14th, a creek ran across the front edge of the banked green, Augusta National style.
The grass on the dormant fairways was tight and wonderful to hit from.  The dormant Bermuda rough was not unfairly deep.  I played by myself, without the benefit of local knowledge, but the hole-by-hole layouts on the scorecard, with yardages, was a great companion.  The practice area is terrific, with a wide and long practice range, a modest-sized and modestly sloping putting green, and a chipping green with a sand bunker that was not the afterthought it sometimes is; this one was filled with plenty of sand and perfectly raked.  Everyone I met during the day -- from the pro shop to the starter to the pro who came out to give me a coupon on the 9th fairway for a free cup of soup at the turn to the young lady with the Russian accent who ladled out the terrific tomato basil soup -- was friendly and helpful to the max.
There were a few things I did not like, none of them fatal but definitely worth noting.  Salem Glen has lots of out of bounds stakes behind the many homes that ring the course.  Those homes are almost always in view, and a few are almost claustrophobically close.  I don't know what the homeowner's association was thinking when it permitted a few residents to erect iron fences; these sporadic distractions to the landscape might make good neighbors, but they don't make for harmonious views from the course.  More annoying than the OB stakes were the cart paths, some just a yard or two from the stakes.  Any pulled or pushed shot that hit or rolled across the paths would pass the OB line, which seems like a double penalty.  If you push or pull the ball that much, the rough and severe angle back to fairway or toward the green is penalty enough.
My final petty annoyance is that the color system for pin positions at Salem Glen is downright bizarre.  Blue, which on most courses denotes a back position, means front of the green at Salem Glen.  Red, which almost always indicates a front position, is middle at Salem Glen, and yellow is the back position.  In daring to be different, Salem Glen's flag system comes off as a silly affectation.
That said, Salem Glen is well worth the price of admission, whether for the full-fledged member or the occasional daily-fee player.
Salem Glen Golf & Country Club, 1000 Glen Day Dr., Clemmons, NC, 336-712-1010.  Architecture by Nicklaus Design.  Web: http://www.salemglen.com.  Gold tees:  6,716 yards, rating 73.1, slope 134.  Blue tees:  6,275, 70.5, 131.  White:  5,821, 68.1, 125.  Red:  4,665, 67.4, 115. 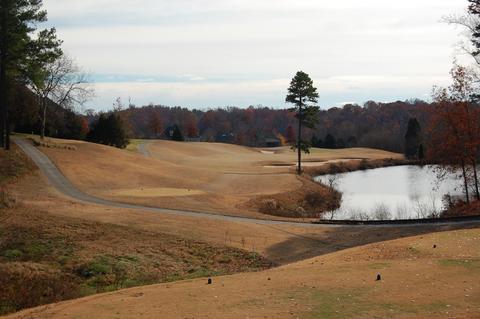 Water at Salem Glen comes into play infrequently, but it sure looks nice.