Well-being a state of mind, and location 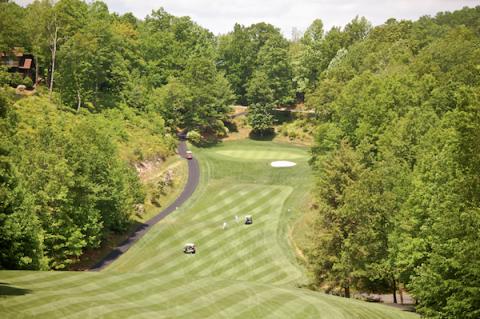 Baby boomers in the North Carolina mountains are a happy lot.  Presumably that includes those who live and play at Connestee Falls, near Brevard.


The Gallup polling firm and Healthways, a health management company, have published the results of more than 350,000 interviews they conducted last year to assess the anxiety level of Americans regarding health, wealth and general well being.  The web site ahiphiwire.org published the results, broken down by congressional district.
Although the data can be cut any number of ways -- by gender, race, income and age -- I was most interested in the attitudes of folks in my age cohort, 45 to 64, which I suspect comprises most of those considering golf real estate.  The results are displayed at the web site on a map of the U.S., by congressional districts.
In the southeastern U.S., attitudes are all over the place, with no

Baby boomers who live in the mountains of North Carolina and Tennessee and between Wilmington and Myrtle Beach are among the happiest.
discernible pattern. For example, along the entire Georgia coast, baby boomers are not generally a happy crowd, showing up consistently in the 2nd quintile from the bottom.  Along the South Carolina coast, notions of well being in the baby boomer crowd are generally positive, in the third and fourth quintiles.  Along the North Carolina coast, folks living from the Virginia state line to about mid-state are in the middle category of attitudes, while those who live from Wilmington south to just above Myrtle Beach are among the happiest folks in the nation (418th out of 435).  I have reviewed a number of golf communities in this area and can recommend Porters Neck, St. James Plantation, Bald Head Island, Ocean Ridge Plantation and others.
If you want to be surrounded by baby boomers who are happy, consider the mountains of North Carolina and eastern Tennessee, which are covered in the dark green on the map, signaling the top 20%.  Asheville, NC, and Knoxville, TN, and their surrounding areas are rife with excellent golf communities and knockout views.  Ditto the upstate area of South Carolina, home to the high-end Cliffs Communities, where Tiger Woods is designing his first U.S. golf course; that part of the map is covered in the light blue representative of the second-highest quintile.
Florida is a mosaic of colors, the happiest baby boomers living in the high net wealth area of the Palm Beaches and the unhappiest, not surprisingly, in the area of Miami, hardest hit by the bad economy and housing crisis.  Mississippi is one of the unhappiest states, whereas Alabama and Texas look much like Florida.  Virginia appears to be the most contented state in the southern U.S. among baby boomers.
When choosing a place to live, remember that attitude is infectious, for better or worse.  So too is noodling around the Well-Being map.  Click here for access.

More in this category: « Play boys: Hefner grabs real estate headline from Furyk No-income-tax states relevant to relatively few »
back to top
Back to Top