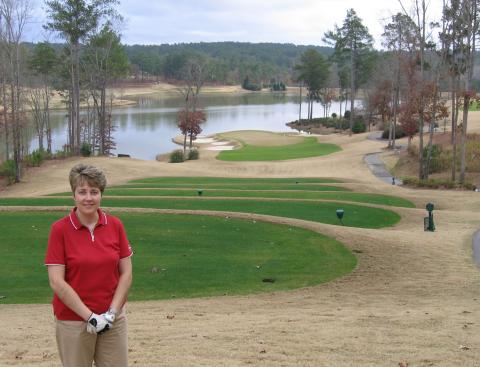 
Hanover, NH's Tom Hoyt, a faithful reader, and his wife Kim recently combined a golf vacation and prospecting trip to Reynolds Plantation in rural Georgia and the golf communities in and around Aiken, SC.  Here is Tom's report, only lightly edited, which reconfirms what I found during a trip to Aiken a few years ago.


We flew into the airport in Columbia, SC., our first time there.  We found it very convenient as the size is not overwhelming, and the access to Interstate 20 is just minutes away.  Certainly flying in/out of Charlotte or Atlanta may give one more direct flight access, but coming from the Northeast, we are used to connecting to get anywhere.
The Fairfield Suites in Aiken gave us quick access to many of the amenities of Aiken, as well as downtown shopping and dining.  As for driving in Aiken, many of the downtown streets are divided by small parks.  The north to south "Chesterfield" and the east to west "Chesterfield" are actually two different roads.  Making turns and crossing traffic requires a bit of thought for a "first timer."
From Aiken, we drove around Augusta, GA (Aiken and Augusta are practically twin cities) and, of course, made our way around the perimeter of Augusta National.  Having never been there before, I was amazed at two things.
Elevation change.  It sure looks flat on TV, but it is otherwise.  While driving along Washington Road reveals

little but a stark green fence, the side roads of Berckmans and Vineland really showcase the rolling terrain.  Interesting note is that while there are many houses in the immediate area, there is an open area on the NW side of Berckmans that I'm told comes from the club buying homes in the area, razing them, and then using the land for parking.
Infrastructure.  How they host one of the countries major sporting events in this location is beyond me.  It's certainly not "Mayberry RFD" but it's far from a major metropolitan city.  Across the street is strip mall city.
There is some road construction in the area, especially the loop around Augusta, but most people locally will tell you the many traffic delays and construction will be worth the result.

Reynolds Plantation in Greensboro, GA, is about a 90-minute ride from Augusta on easily traveled I-20.  You will find some amenities right at exit 130.  It's about an 8-mile ride to the entrance to Reynolds and, not surprisingly, you see nearby what appears to be rapid commercialization, including restaurants, retail, medical offices, entertainment.  Everything seems nicely designed but doesn't appear to have been "thrown up on a whim."
We stayed at the Ritz Carlton on site.  There is no other lodging at Reynolds, nor much else in the general vicinity.  What's not to love about a Ritz Carlton?  It's not inexpensive, but you know you aren't staying at the Super 8 either.  Packages that include golf and meals are available, but  not cheap.  Parking is by valet which will run you $15 (plus tax) per day and a tip to the valets each time you need your car.
There are five golf courses at Reynolds (soon to be six).  Four of them are open to outside play, two are private.  The Creek Club recently opened, and the Richland course is being built.  In addition to being members

Reynolds had an 11 a.m. shotgun start, to skirt any issues with morning frost.
only, they are located next to each other and away from the other courses.  The Creek Club is home to the Travel & Leisure golf cottage.  It's open and available for tours.  Basically, think everything you've ever wanted in a buddies golf trip, and it's there.  The Creek Club's finishing hole is an inventive Jim Engh design with three green complexes; you choose which one to play to.  The road leading to the two courses will be extended back to route 44 soon, making it all but a separate community within the entire Reynolds facility.
Our first day's tee time at Lake Oconee was rained out.  This course is the closest to the Ritz and also is home of the Taylor Made Golf Academy.  It's located on the far end of the driving range, which is out the back door of the Lake Oconee lodge.
On the second day, we played the Reynolds Plantation Course.  It gives you a few glimpses of Lake Oconee, most noticeably on the downhill #5 hole.
On the third day, we played the Reynolds National Course.  It is made up of three 9-hole courses -- the Bluff, Ridge, and Cove.  Because of the time of year, there was an 11 a.m. shotgun start.  I thought this was a very smart idea as frost delays are certainly possible; and although 11 a.m. might be late, it ensures everybody goes off and enjoys a round without their start time being pushed back.  Despite my wife and I playing as a twosome, we never felt "stuck" or slowed down by the pace of play.
After the round at the National Course (which ended around 3 PM), we
Great Waters is perhaps the most picturesque of Reynolds' six courses.
took the rest of the daylight hours and drove to and around the Reynolds Great Waters location.  This is perhaps the community's most picturesque course.  That said, it's separate from the rest of the development and there is little if any signage on route 44 to direct you there.  Great Waters played host to some PGA tour events in the late ‘90s, which is hard to believe.  It's rather small with only one way in and out.
On our fourth day, we played at Mount Vintage Plantation in North Augusta, SC.  Augusta is in Georgia, but North Augusta is in South Carolina (I thought that was interesting).  Mount Vintage is about six miles from the exit off I-20; halfway to the community along Sweetwater Road, you pass the BP distribution center (oil and gas, I'm guessing).  It sort of sticks out but it's a good reminder that you aren't lost.  Mount Vintage is in the middle of horse country with fenced area's on either side of the round.  At the entrance, the road splits; a left takes you to the stables.  Mount Vintage recently built a community center complete with exercise equipment, tennis, and pools.  There are three 9-hole courses here as well.  Two revolve around the clubhouse, an 1800s building moved to the location, and with modern buildings attached to it.  All structures blend nicely.  We played the Chester and Vintage courses, my favorite design of the trip.  A great combination of elevation changes, views, conditioning, water, and the over-seeding made it even more spectacular.  We had a nice tour afterwards from one of the community's agents who grew up nearby and was able to share many historical perspectives.
Day five took us to Cedar Creek back in Aiken.  There are two ways to get there -- the back way will take you down Whiskey Road (the major commerce road in South Aiken), and the road to the front gate brings you through more rural horse country.  Cedar Creek is a non-gated community.  As our host pointed out, the community may construct gates manned by guards someday, but for now the cost savings of no gates are considerable.

It's hard to compare Cedar Creek to the other communities because, to be fair, it's a different animal.  There is only one 18-hole course.  The clubhouse has only a small "grill room", and the practice facilities are rather utilitarian.  That said, Cedar Creek's real estate is 25% to 35% less expensive than anything else we saw.  Golf membership for the publicly accessible club is $2,000; at Reynolds, initiation fees run into the six figures.  The 18-hole Arthur Hills design at Cedar Creek has the bones of a masterpiece, but after drenching rains the week before, the course was not in good shape.  Some of the holes might have you say to yourself, "Boy, if this were in perfect condition, it would be really nice."  Unfortunately, it's not.
We didn't plan on saving the best for last, but in our opinion it turned out that way.  Woodside Plantation is located in the heart of South Aiken, and yet in a world by itself.  The community has four entrances.  One takes you into the back of the Aiken Mall, two sides entrances appear that they belong in your typical gated community, and a fourth, currently on a dirt road, enters into the middle of the equestrian development.
Woodside has 4 1/2 courses, and membership is a bit confusing.  Basically, two of the courses are managed by ClubCorp (with their own clubhouse), and two are member owned (with their own clubhouse).  The Nicklaus Design course, The Reserve Club at Woodside, was terrific in December, but I'd especially love to play it in May.  It and the Fuzzy Zoeller course, still in the process of being completed, come back to the same clubhouse, which is undergoing an expansion.
One thing that struck us at all communities is that in this part of the country, most houses are built on piers or pilings.  If there is sufficient elevation change, you might have a walkout or lower level, but if not, that area becomes a crawl space, which gives you access to the mechanical systems.  This crawl space in some spots is four to six feet high, so moving wiring and ductwork around is easy.
Coming from the northeast and a lifetime of two-story houses, iwalking through homes with 2,000+ square feet on one level felt massive to us, and smart.  It makes you wonder:  Why not just have everything on one floor and take the extra space to open up the kitchen/dining/living area that everybody ends up spending most of their time in anyway? 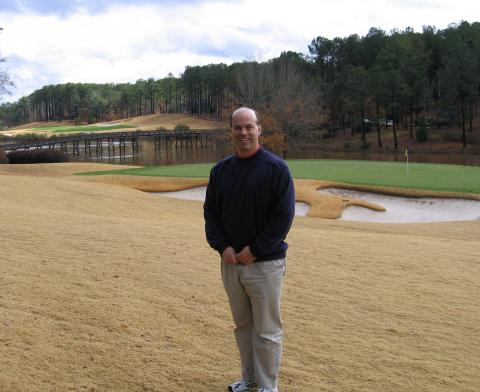 Tom Hoyt at #17 at the Lake Oconee course at Reynolds Plantation.

More in this category: « Scary tee shot at wide open #1 at Old Course Same old same old, but with ads »
back to top
Back to Top