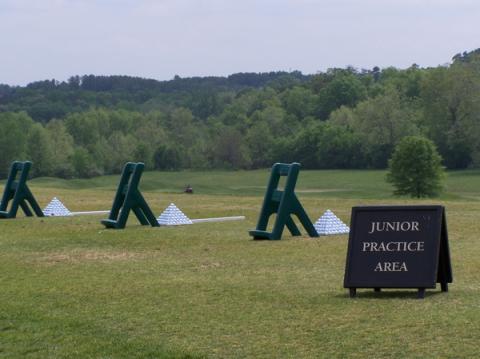 The Glenmore Country Club, in Keswick, VA, puts strong emphasis on its junior program, knowing that is one path to membership stability.


A column in today's Wall Street Journal by John Paul Newport reemphasizes a point we have made in this space before about financial issues private golf clubs are facing.  In a recession, many of them do not have much room to maneuver.  Members are leaving faster than new ones are joining.  These country clubs have a number of options to staunch the income flow, some potentially self-defeating.
The simplest approach is to deeply discount entrance fees for a period of

The equivalent of $400 a round, even at a private club you like, is tough to justify in these times.
time.  My club in Connecticut has done this routinely in past years, offering a promotional entrance fee from January to May before kicking it back up a few thousand dollars once the season begins.  The lower entrance fees, of course, reduce a club's stream of income and they do not exactly encourage warm feelings among those who paid the regular price just a few months earlier.  But subsidizing the entrance fees of a few new members sure beats a net loss of members since dues, even more than initiation fees, provide the constant stream of income necessary to keep things operational.
Other actions are equally daunting and chip away at the very nature of a "private" club.  One option is to accept more group outings to generate needed supplemental income, in effect shutting off play to members one or two days a week, typically Monday and Tuesday.  This is always a grousing point at private clubs.  Another, more radical measure, is to turn the private course public Monday through Thursday or Friday, permitting outside play for substantial daily fees but reserving a block of times for members.  Some golf courses in resort areas of the southern U.S. use such an approach, but make no mistake about it, these clubs feel more "semi-" than they do "private."  And those interlopers, some of whom pick up a golf club once a year, at the company outing, tend to chew up the golf course.
There are some less invasive remedies club membership committees should investigate.  These are built
Some clubs understand that strong support for junior golf programs stabilizes membership.
on the premise that the more people under the umbrella of a "family membership," the better the chance of continuity of membership.  Membership committees, for example, should conduct a professional survey to find out if all marital partners are using the club and, if not, determine what the absent spouses are interested in.  Then, develop programs to engage them.  In nearly 25 years at my own club, my wife and I have been invited to many dinners and dances and wine tastings but never to a lecture by an expert on a topic of interest.  And yet I know from having played golf with them that many of my fellow members have practical expertise on subjects like financial planning, insurance, automobiles (a few are dealers), real estate and, ahem, golf communities.
My wife does not play golf, but she did pay for and attend a few aerobics classes at our club that were conducted by an outside trainer.  If our club, which does not have a fitness center, sponsored something like that, it might engage more non-golfing spouses.  This becomes especially important when a son or daughter goes off to college or the family buys a vacation home for use during the summer.  If dad is the only one who uses the facilities for a few weeks in spring and fall, then his mental calculator starts to spit out a tough-to-justify number like $400 per round played (that is what I paid last year).  That is always a danger sign for private clubs, especially in the current economy.  (Note:  After 22 years at our Connecticut club, we have made the tough decision to give up our membership.)
But, perhaps, the best way to keep families from bolting is through junior golf programs.  What parents who can scrape out dues payments are going to deny their sons and daughters the opportunity to continue in an active club program for juniors?  Some clubs recognize this and throw a lot of resources at their junior programs.  The club in the golf community of Glenmore, near Charlottesville, VA, even carves out a separate practice area for its juniors.  Other clubs consider junior programs more or less an afterthought, running the occasional group clinic, arranging a few play dates for the kids but also restricting tee times for the youngest children to an unreasonably few hours a week.  Substantial investments and a focus on well-run junior programs can pay off in the short run by stemming member flight, but also can begin to sow the seeds for intermediate memberships later, after some of those juniors who were cultivated in their teens finish college and return to live and work near where they grew up.

Most families average four members.  If the carrying costs for club membership are, say, $6,000 per year, and all four members are engaged in activities at the club, then the pro rata is $1,500.  If dad plays golf and no one else is engaged, then that $6,000 looks unjustifiable.  Less is more for private clubs in today's economy.
Click here for the Wall Street Journal story (it may require a subscription; if so, email me and I will forward it to you.)

More in this category: « Endangered species? Idea of age-restricted communities may be growing old Lifetime membership at wondrous Scottish golf club »
back to top
Back to Top