Taking new friends at their words 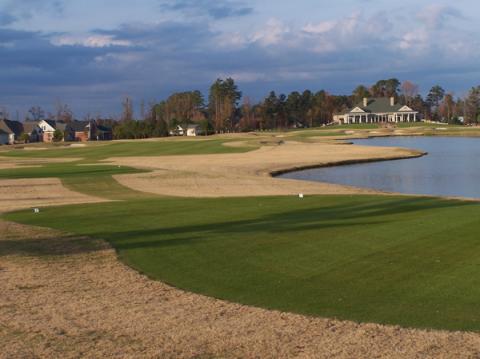 New Bern, NC, is a "small town gem," and the local community of Taberna's golf course shows polish of its own.

One of the great things about my job is that I become friends with people from around the world without actually meeting them.  They find my site, I find theirs, and we wind up exchanging chitchat about golf, golf communities, and even politics.  The relationships grow without any of those icky issues of body language or the nuances of pauses or sighs that

McCain and Palin's contention to the contrary, words do matter.
can sometimes be misconstrued as something more than they are.  And I can never blame them for having passed on their germs to me during the cold season.  Our connections are based strictly on written words and, despite what Sarah Palin and John McCain tried to pin on Barack Obama during the U.S. Presidential campaign, words do matter.
I have made two especially interesting contacts in the last few weeks with people whose well-written and well-constructed web sites cover different territories than the one you are reading now but are excellent resources for those contemplating a relocation to a golfing area -- or who dream of such.
Jeffrey Prest is the blogmaster for CheapGolfsFinestHoles.com, a web site dedicated to exactly what the name implies.  He reviews "first-rate holes on third-rate courses" whose green fees are about £30, or $50 US at the current exchange rates.  It is an inspired and perfectly timed idea in the current economy, especially for those of us -- count me in the group -- who are seriously contemplating giving up their private club membership and hunting for bargains in daily fee golf.  As Jeffrey grows his portfolio of golf holes, including a fair number in the U.S., his site will only get better.
As I write this, my new friend Bill Durell and his better half are driving the back roads of the U.S. south, somewhere between Mississippi and his winter home in Texas.  Armed with a camera, map, notepad and sense of adventure, the Durells are stopping at as many small towns as they can along the way.  Those towns that meet their strict specs (see their web site for the criteria) make the grade and get the full treatment at SmallTownGems.com. That means dozens of photos and a full description of local history and lifestyles.  I admire Bill's brutal honesty; he has a "disqualified" list of towns that fall short of "gem" status and a Hall of Shame for those that fall way short.
Some of the small town gems are in great golfing areas and are worth considering if you don't necessarily require the amenities offered in many planned communities.  Some golfing rich small town gems that receive a gold star from Bill include New Bern, NC, Williamsburg, VA, Jonesborough, TN, Fernandina Beach and St. Augustine, FL, and Madison and Jekyll Island, GA.

More in this category: « All in one: Play golf and look for a home at the same time New York condo price protections: Sign of things to come in southern communities? »
back to top
Back to Top