In 1990, a time when the Japanese yen was quite strong compared with the U.S. dollar, Japanese businessmen began buying up iconic U.S. properties such as Rockefeller Center and, yikes, Pebble Beach Golf Links.  If it weren't for a Japanese banking crisis and economy that plummeted later in the ‘90s, sushi and sake could be on the menu today at the 19th hole at Pebble (not that we don't love both).
Here we are in 2007 with a banking crisis of our own and a dollar that is in the dumper.  As the famed student of malapropism, Yogi Berra, once said, "it is déjà vu all over again"...only worse.  The dollar is in free fall, oil prices are going in the opposite direction, the housing market is a total mess and foreign investors, more and more, are holders of U.S. debt.  Even the Canadian and U.S. dollars are now at parity.  How woulda thunk it?
This may be great news for the U.S. trade deficit, but American chauvinists will start to rebel at

It is only a matter of time before cheap currency goes in search of  high-end golfing properties in the States.
the thought of foreigners owning the family jewels (I recall all the op eds when Rockefeller Center was sold in 1990 to Japanese investors.)  The Euro is worth about $1.45 and the pound more than $2.10, and as they gain even more strength against the dollar, European buying power is beginning to assert itself in such varied venues as eBay online auctions and Sotheby's and Christies live art auctions.  It is only a matter of time before cheap currency goes in search of  high-end golfing properties in the States.
The Euros won't have to look too hard for courses to acquire.  At any one time in the States, up to 200 courses are on the market, according to Kathy Bissell, vice president of National Golf Course Sales for real estate firm Coldwell Banker.  The courses range from little nine-hole mom and pop operations in rural Mississippi listed for less than $500,000 to entire golf course developments.
"We have a Nevada property available right now for $20 million," Ms. Bissell told me the other day during a phone interview.  The Nevada resort property includes two courses; for something less than 10 million pounds sterling, two courses in the mountains of Nevada could look pretty cheap to a British investor.
Ms. Bissell says an increasing number of calls have been coming to her office from places like South Africa, Great Britain and other countries.  South Korean investors are always interested in U.S. properties, including golf courses she says, because the Korean government puts a cap on how much land investment a citizen can make in-country; that is understandable since South Korea is a relatively small country.  Great Britain, not an overwhelmingly large country itself, has few golf course developments in process, and investors there - as well as individuals - could see the current exchange rate as an opportunity to invest in U.S. properties...perhaps even some of our most elite courses.
Ms. Bissell, pointing to the sale of Pebble Beach just 17 years ago, believes any course could be available if the price were right.
"I suppose there is a price at which the members of Augusta National or Shinnecock could be persuaded to sell," she says.
The American chauvinist golfer in me rebels at the thought.  Members of the most exclusive clubs do not need the money.  But logic also reminds us that many of those same members are businessmen, and if they can turn, oh, a couple hundred million dollar profit on a $100,000 investment, who knows? 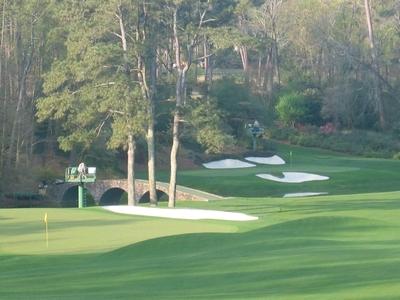 Is there no price at which, say, Augusta National could be sold?

More in this category: « Going through phases: Buying a new golf course home is sometimes more dumb luck than good sense Bless you Wall Street Journal »
back to top
Back to Top