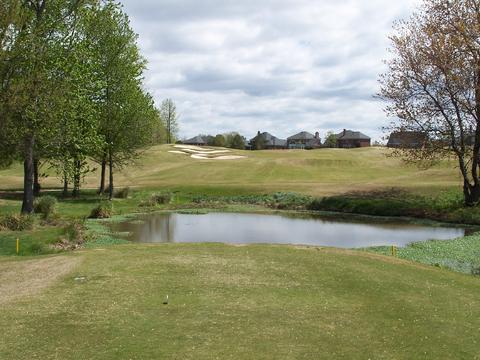 Inventories are increasing in Williamsburg, VA, communities like Governors Land, but pricing has not been affected significantly...yet.  This is a view from the 1st tee at the Two Rivers Country Club at Governors Land, the only private club in the area.

Real estate agents will tell you that the boundary between a bull and bear market for homes is about seven months of inventory.  More than that and it's a buyer's market.  Less and the seller has the upper hand in negotiations.
Two of the agents in the HomeOnTheCourse NetworkTM of southern real estate brokers indicate that the scales in their markets have tipped strongly toward the buyer, and that the trend will continue through next year.  Williamsburg, VA, and Wilmington, NC, inventories now exceed nine months and are climbing.
C.B. Johnson of Keller Williams in Wilmington says there is no debating that buyers have the upper hand in negotiations right now, but there just aren't enough of those to make an impact on sales in the best golf course communities.
"It is normal for [homes in the $700,000 to $800,000] price range to move slowly because there's a smaller pool of buyers who can afford to buy," says Johnson.  Inventories in Wilmington's highest-end golf communities, Porters Neck and Landfall, have passed the 11 month and 16 month levels respectively, and it is only a matter of time before those who must sell because of health and other lifestyle reasons start to lower their asking prices and put downward pressure on market pricing overall.
Like most data, it helps to understand what is behind the numbers.  The Wilmington community of Beau Rivage, for example, has a home inventory level of 23 months, putting it more than twice as long as the overall Wilmington market.  But, says Johnson, more than 25% of Beau Rivage's homes are new or under construction.  Builders know exactly what they have put into their homes and they don't have the flexibility that a private owner with years of appreciation might have.  The builders are more inclined to offer "extras" like upgraded appliances or maybe throw in a free plasma TV than they are to take a loss on the homes they have built.  But if the market gets much worse, even the builders may have to consider taking some loss leaders.

Elaine von Cannon of RE/Max says the Williamsburg market is experiencing the same issues as Wilmington.  She reports that inventory increases have affected all types of housing.
"You can find whatever your want," she says, "from re-sales to new construction."
As in Wilmington, seller desperation isn't yet evident in prices.
"Sellers here [in Williamsburg] are still not accepting that the market has gone soft," says von Cannon, "and they will not reduce prices.  So they are sitting for six months to two years."
von Cannon says that just a few owners have resorted to auctions to move their properties, but none sold because the reserve prices were not met.
"I also heard of one couple offering their car along with the house," she adds.
Johnson has seen little panic among owners in Wilmington whom, he says, "have decent equity in their homes and can afford to wait."  But new arrivals, "particularly those from Michigan," he adds, "are having trouble selling their homes in the north/northeast."
Johnson and von Cannon agree that things are likely to get worse for sellers before they get better.  They predict higher inventories and a further softening of prices next year.  On the surface, that would imply that the best strategy for those who want to move south would be to wait a few more months at least.  But if you are trying to sell your home in a market even worse than Williamsburg's or Wilmington's, that may be a losing strategy.  Maybe the best idea is to accept a fair price for your current home and use the cash for leverage in negotiating for that new home in the south.  For a list of home prices in 400 metro areas in the 2nd quarter of 2007, which was published in August, click here.
Both von Cannon and Johnson are experienced brokers who can provide you with updated information about their markets and arrange for tours of the excellent local golf course communities.  Contact me and I will be happy to put you in touch with either or both of them at no cost or obligation whatsoever. 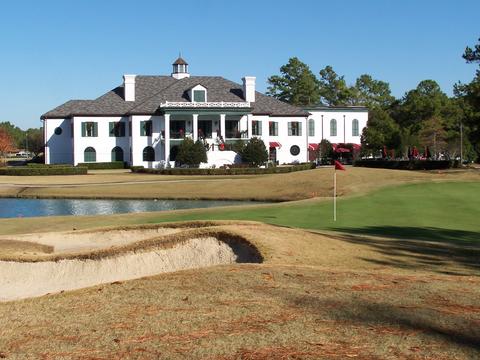 The Porters Neck community in Wilmington has more than 11 months of home inventory.  The clubhouse, shown here, and golf course have received makeovers in the last year in anticipation of taking the golf club private.

More in this category: « State of denial: Florida's St. Joe Company insults the literate Private golf courses at your disposal...for one day »
back to top
Back to Top