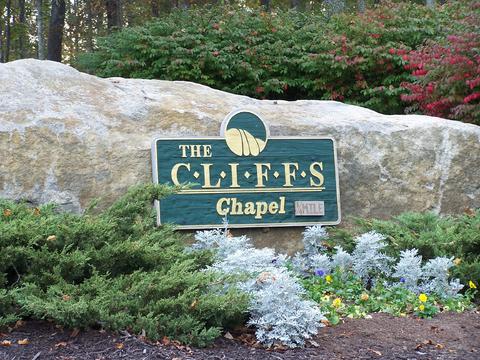 The Cliffs Communities is excluded from Where to Retire's rankings.  We wonder why, given that The Cliffs appeals to retirees, has plenty of property for sale and a grand buffet of amenities, including a chapel on the top of a mountain.

Magazine worst with its "best"

I may be tilting at a windmill. Where to Retire magazine has a circulation of 200,000, but after plunking down $4.95 to purchase a copy of the magazine's latest issue, and then reading it, I had to react.
Where to Retire has a magic formula for making money:  Sell advertising to retirement-oriented communities, then produce strongly positive articles about the communities.  The magazine supplements these impartial appearing articles with "best of" lists that further exalt those same communities.  The magazine's advertisers win because readers assume an impartial panel of judges has decided which communities are the best.  Where to Retire wins because it generates gobs of money from the scores of ads it places, and the positive articles and rankings keep their advertisers happy.  The only losers are those readers who assume the August cover story "100 Best Master Planned Communities" is objective and comprehensive.
Where to Retire gives no indication of how the "best" designation is determined.  Nothing in the publisher's letter or in the 100 Best listing itself indicates the criteria for the selections or who did the choosing.  Knowing whether the panel was independent or an inside job (i.e. the magazine's editors, advertising department or publisher) would help the reader size up the impartiality of the choices.
I made a call to Where to Retire's editorial offices and, as it turns out, the editors choose the top communities, although I use the term "editor" loosely.  Each of the 100 ranked communities receives the same treatment in the magazine; a short summary about amenities, the range of prices for homes and properties, some contact information, and attributed comments from two of each community's residents.  These comments are unvaried, all of them of the "we are so glad we made the choice to live here" type.  There are no nuances and precious little detail in their comments.  If the publication's editors interviewed these folks, they certainly didn't work too hard to draw them out.  The quotations sound precisely as if they were lifted from marketing brochures; it would not be a surprise to learn that the communities' promotional departments supplied the quotes.
The editors who choose the top 100 do not visit the communities, according to one of them we spoke with on the phone.  We thought that, perhaps, the editors use a detailed checklist in the absence of visits.  No, our editor contact said, the selection panel makes its decisions based on soft criteria such as how "well-rounded" or "well-established" the community appears.   The selection panel also considers input from a few writers who had contributed articles to the publication in the past ("puff" pieces about communities that advertise in the magazine).
We learned also that communities not "actively selling" new properties are excluded from consideration for the list.  A community that is completely sold out, the editor explained, is not considered because, in her words, "retirees can't move there."
Huh?  It was news to us that retirees don't buy resale homes.  This bizarre approach excludes fine but fully established communities such as The Landings (Savannah), Porter's Neck (Wilmington, NC), Governor's Club (Chapel Hill, NC) and Champion Hills (Hendersonville, NC).  Having visited 80+ communities in the last two years, some of them on the Where to Retire list, we can say that the magazine's readers are not being well served by a process which excludes mature communities that provide some of the most stable and "well-rounded" living environments of all.
The fact is that Where to Retire also excludes communities that are "actively selling," despite what they say.  I know, for example, that there are retirees living at the ever-expanding Cliffs Communities in the Carolinas; I've played golf with them.  And there are plenty of home sites for sale by the developer.  Yet the Cliffs is nowhere on the list.  We recently visited the sleek Rivertowne Country Club community in Mt. Pleasant, SC, a Ginn Company development with homes under construction and some lots for sale; it is certainly worthy of top 100 status, but is ignored.  Southbridge, near Savannah, is a nice enough community but its golf course showed a lot of wear and tear and lack of investment when I played it a year ago.  It makes Where to Retire's Top 100.  The Cliffs courses and the Rivertowne course, as well as all the rest of their amenities, are immaculate, and they beat Southbridge and virtually every other Top 100 community on the range and quality of amenities.
Is it a coincidence we could not find a Cliffs or Rivertowne advertisement in Where to Retire?  All but a few of the ranked communities placed an ad in the August issue of the magazine.  All features on communities in other issues of the magazine are uniformly positive, and virtually all the communities reviewed are advertisers.  The editor we spoke with said advertising spend was not a consideration in the choices of the Top 100, but if there is any line between marketing and editorial at Where to Retire, we can't find it.
We are a rankings happy society.  The broadcast and print media are always throwing the 50 best of this and the 100 best of that at us.  It is innocent fun, for example, to contemplate and argue about the relative rankings of a Pine Valley or Cypress Point or Augusta National, but no one is going to make a lifestyle decision based on such a list.
Where to Retire's assessments are different.  The magazine is targeted at folks who face a critical decision - where to retire - and many of them assume and trust that the magazine's judgments are objective and well considered.  Where to Retire should be clear to its readers that its advertising revenues drive those judgments.

More in this category: « FedEx Cup runneth over for me Headed for Austin, TX »
back to top
Back to Top