Great Golf in the Carolinas a Matter of Geography
Tuesday, July 1, 2014

Great Golf in the Carolinas a Matter of Geography

I am working on an article for CarolinaLiving.com about the golf ratings panels in North and South Carolina. Just a casual review of the panels' two rankings lists for 2014 shows one particular oddity; South Carolina, with a coastline 114 miles shorter than North Carolina's, nevertheless boasts 11 coastal region golf courses in its top 15, whereas North Carolina shows only two (both in Wilmington). 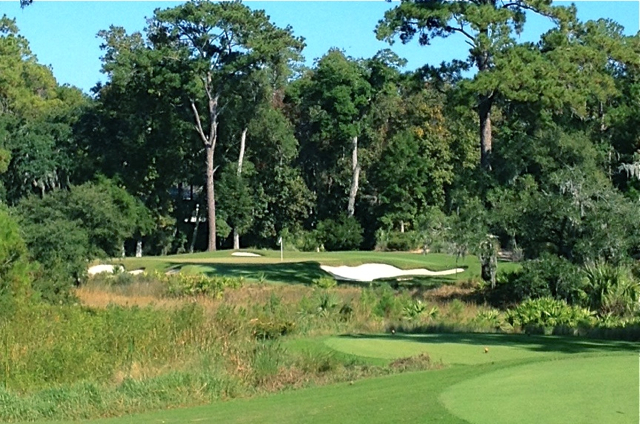 The South Carolina Golf Rating Panel gave May River Golf Club, a Jack Nicklaus design, its #2 ranking in the state.

The evidence seems convincing that serious golfers looking for the best golf courses on the east coast have a better choice south of the border between the Carolinas than above it. The South Carolina panel tapped the Ocean Course at Kiawah Island, previous host to both the Ryder Cup and PGA Championship, as the best course in the state, followed by May River Golf Club in Bluffton (near Hilton Head) at #2 and the famed Harbour Town Links on Hilton Head at #5. The other top 10 coastal choices from the panel include Long Cove (Hilton Head, #7), the Dunes Club in Myrtle Beach (#8) and Secession Golf Club near Beaufort (#9). South Carolina's second 10 include eight other golf courses that are located within just a few miles of the ocean.
North Carolina's Sandhills and mountain golf courses are every bit as prized as South Carolina's coastal courses, starting with Pinehurst #2, which is ranked #1 by the North Carolina state panel and recently played host to the men's and women's U.S. Opens. The rest of the North Carolina panel's top five is a potpourri of geography, with the second-ranked Grandfather Golf & Country Club located in the mountains, the Country Club of North Carolina back in Pinehurst, the Old North State Club on Bandin Lake in the middle of the state, and Quail Hollow in a suburb of big-city Charlotte. 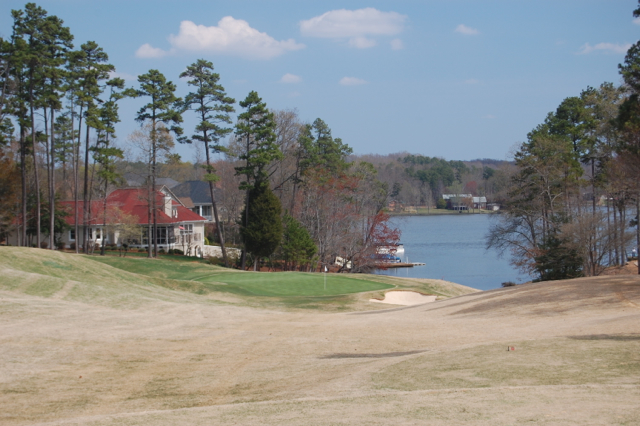 The North Carolina Golf Rating Panel deemed Old North State Club, on Bandin Lake and in the golf community of Uwharrie Point, to be the 4th best layout in the state.

The highest ranked club on the North Carolina coast is Cape Fear Country Club in Wilmington (#14), followed by the nearby and fiercely private Eagle Point Golf Club (#15), the invention of New York financiers looking for a personal playground. You don't see another coastal course on the North Carolina list until the 37th spot, the (Pete) Dye Course at Landfall. The 41st spot belongs to Bald Head Island's links style golf course, and the 42nd and 45th rankings are held respectively by two courses at Sunset Beach's Ocean Ridge Plantation, Leopard's Chase and Tiger's Eye.
The conclusion we draw from these geographical golf course anomalies is that if you are a serious golfer looking to relocate to serious golfing territory, look to North Carolina if you like mountain and inland golf and to South Carolina if you prefer coastal golf. And look to us if you would like some assistance in homing in on the golf community and golf course that best suit your requirements. Contact us here.

More in this category: « Thinking about remote golf communities... How to play a grand array of golf courses »
back to top
Back to Top