Miracle on the 9th green

The time you won your town the race, We chaired you through the marketplace; Man and boy stood cheering by, And home we brought you shoulder-high...
--    "To An Athlete Dying Young,"  A. E. Housman

This year, my 60th in this lifetime, I have gained almost a stroke on my handicap rating.  I've played as many rounds over 90 as I have below 80.  Maybe it's the aging process.  Sometimes I feel pretty good and play badly.  Sometimes I feel bad and still play badly.  I'm sure some of you are sighing with the sympathy of the familiar.
The worse I play the more my mind drifts back to a few highlight shots of the past, like the hole in one at age 16 on the New Jersey course where I learned to play; the tee shot left hanging over the lip on a par 3 in Rochester, MN; the ball at eye level in a bunker at Pine Valley that I still regret not attempting to hit back over my shoulder, the way Mickelson did in an NCAA tournament round; or the chip shot I hit from behind and right of the 16th green at Augusta to where they put the pin on Sunday at The Masters, a 120-foot, 90-degree left-angle shot that almost went in the cup (I also remember the comeback five-footer I missed for the par).
The memory of one particular shot came rushing back to me a few weeks ago when I stepped onto the 9th tee at Hop Meadow Country Club in Simsbury, CT, my home course.  As I looked out 200 yards to the hole a few stories below, I noted that the pin was at the back right of the large green.  It took me back 20 years to a golfing moment I will never forget.
It was the club's major three-day member/member tournament, and our flight of eight teams was packed with good golfers, most of them single-digit handicaps. (I was an 11 at the time, my partner Tom one or two strokes better).  We had slogged our way to third place through the first six of seven nine-hole matches, with one match to go.  As it turned out, we were matched with the first-place team; all they needed to do was halve (tie) their match with us, and they would win.
It came down to the final hole, the signature hole 9th, with the match all square.  The tee shot comes out of a chute of trees, over a large pond directly in front of the back-to-front sloping green.  Two sand bunkers guard the right side, and the only bailout is left of the green, where thick rough and just a small patch of fairway grass make getting up and down on the tilted green difficult.
My partner Tom hit his ball in the back right bunker, and I left my tee shot at the front left on the green, a good 45 feet from the cup.  One of our opponents, Dick McAuliffe, knocked a pure five-iron five feet to the left of the cup.  (Baseball fans of a certain vintage might recall Dick, an outstanding infielder for the Boston Red Sox and Detroit Tigers in the ‘60s and ‘70s).  It appeared that playing the rest of the hole was a mere formality.  We were toast.
Tom blasted his sand shot to 15 feet away and then McAuliffe, a golfer of intense confidence, did a curious thing.  Thinking he would two-putt at worst to halve the hole and the match, thereby ensuring his team the victory, he conceded Tom's long par putt.  That gave me the proverbial "free ride" for my over-hill-and-dale putt.  I felt no pressure because I had putted like a weight-lifter all day; no one, me included, expected I would get it close.  But I made a smooth stroke and watched in dumbfounded exhilaration as the ball hit the back of the cup and dropped in.
I invented the Tiger Woods fist pump that day, as well as the accompanying yell.  McAuliffe, who had conquered the pressure of playing baseball in front of more than 60,000 people, looked shaken, the realization coming to him that by being a gentleman and conceding my partner's putt, he had set the stage for a putt I could hit any way I wanted.  He proceeded to miss his five-footer by six inches on the low side.  Five minutes later we found out the second-place team had lost, and that Tom and I had won our flight and the biggest payday of my amateur career.
It was a Bobby Thompson, Franco Harris, Rocky Balboa moment all rolled into one. 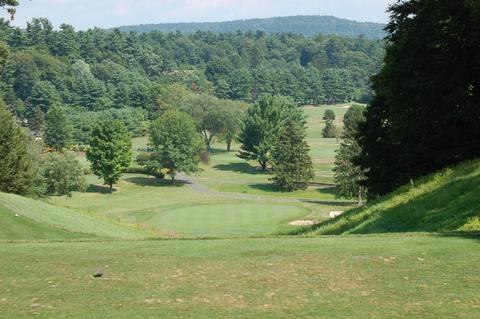 More in this category: « Sorry Portland More ugliness in housing market »
back to top
Back to Top