Faint Praise: For magazine’s “best” communities, it pays to advertise

For starters, there are thousands of planned communities in the U.S. To do a proper analysis and review of even a small percentage of them would take years and involve a major investment in human resources. Instead, and by their own admission, Where to Retire editors start

The only Virginia community on the Top 50 list is not the best in the state by a longshot.
by considering fewer than 150 communities nationwide, which is less than 5% of the planned communities in the state of Florida alone. One is left to wonder how “America's foremost authority on retirement relocation” arrives at such an elite group of communities to consider from such a vast number across the country.

The answer has more to do with commerce than with research and analysis. Where to Retire’s bi-monthly magazine includes dozens of paid advertisements by planned communities, and the ranks of the Top 50 are filled substantially with those paying customers and those who paid in the past and Where to Retire wants back in the fold.

“We [advertised] in the past,” a prominent developer told us in explaining how one of his communities made the list, “and they [Where to Retire] want us to do so in the future. I operate under the assumption that advertising is an unacknowledged factor in selecting both the candidate and finalist lists, and it would be naive not to so assume.”

We agree, but not everyone considering a retirement home has that developer’s experience or our healthy strain of skepticism. But even a casual scan of the Top 50 list should make most readers skeptical. For example, the only Where to Retire Top 50 planned community in the entire

How can the top five communities in Georgia not include The Landings?  How can a NC list have no community from Raleigh, Durham or Chapel Hill?
Commonwealth of Virginia is Colonial Heritage in Williamsburg, a Lennar Corp community for folks 55 and over. We visited the development five years ago and were impressed with its master plan, clubhouse and full-time director of activities, although that position is not currently indicated at the Colonial Heritage web site. However, much as we admire the esteemed architect Arthur Hills, the course he designed for Colonial Heritage had long forced carries, was not women friendly and was too tough for an older group of residents. In addition, the community falls well short of private enclave status since the golf course is public and the expansive clubhouse is mostly open to the public. Colonial Heritage is a nice community, but certainly not worthy of being Virginia’s only entrant. What about Governors Land, down the road in Williamsburg, or Fawn Lake in Fredericksburg, or Glenmore near Charlottesville, or Old Trail in Crozet, or Creighton Farms in Aldie, or Toll Brothers’ Dominion Valley in Haymarket, or any of the dozens of other better conceived and executed golf communities in Virginia? (We have reported on all of them at this site.) 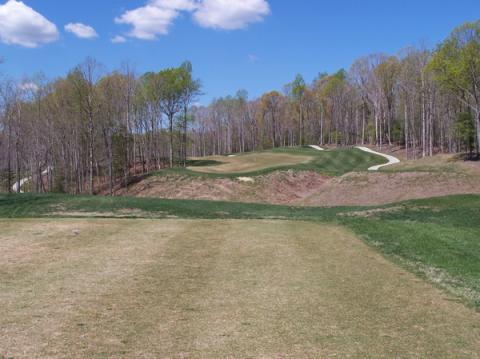 Colonial Heritage in Williamsburg, VA is a nice community, albeit with a golf course too tough for all but the most accomplished 55+ golfers.  But the best planned community in all of Virginia?  Hardly.

This is not to say that some of the golf communities on Where to Retire’s Top 50 list are misplaced. We have visited and praised such rated golf communities as Carolina Colours in New Bern, NC, and Brunswick Forest near Wilmington. But a best-of list of five planned communities in Georgia that is missing Savannah’s wonderfully organized and managed Landings community, or a North Carolina list with no Hasentree or Governors Club or, for that matter, no golf community in the huge triangle of Raleigh/Durham/Chapel Hill should make anyone considering a move to a planned community extremely skeptical of Where to Retire’s selection process.

Note: If you would like a list of golf communities in the southern U.S. that match your own criteria, please fill out our online Golf Home Survey. It should take no more than 10 minutes to complete; once we have your responses, which we will never share with anyone without your permission, we will send you our objective assessment of which golf communities satisfy your requirements. There is no cost or obligation to you. Click here for our Golf Home Survey.

More in this category: « Country Roads Take Me Home to Berkshire Hills Golf Course Worthy of Long Drive Golf home lots to sell at online auction »
back to top
Back to Top