As a real estate agent who benefits indirectly from more and more baby boomers searching for golf homes in the southern U.S., I could certainly be accused of self-interest in asserting repeatedly that the baby boomer migration is in full bloom and that prices in southern U.S. golf communities will rise faster than those in the North. Okay, “Guilty as charged.”

Numbers don’t lie, and although sales figures from one or two particular golf communities are not scientific proof of the theory, the latest U.S. migration patterns are certainly conclusive. In short, according to a recent Wall Street Journal article based on a new Census report, “Americans have resumed moving from the Northeast and Midwest to the West and South…” and “Forty of the 50 fastest–growing metropolitan areas in the U.S. last year were in the South or West.”

All about supply and demand

Determining price movements in the real estate business is relatively easy to do if you have a sense of supply and demand. Low supply and high demand almost always result in escalating prices. Lots of supply and low demand results in dramatically lower prices. If people are relocating from

Low supply and high demand almost always result in higher prices.
one area of the country to another, and that trend continues over time, it stands to reason that prices in the region of embarkation (Northeast and Midwest) will not rise anywhere near as fast as they will in the South and West. You might argue that builders in the South, for example, may suddenly go crazy and produce an overabundance of new inventory, but that would create construction and related jobs which, presumably, would create additional buyers for those new homes.

Specific evidence of this mass re-migration is growing. In the last few days, we received a report from Daniel Island’s real estate company that includes some dramatically positive numbers. The diverse and attractive mixed-use golf community within 20 minutes of Charleston, SC, and even closer to the vibrant suburban town of Mt. Pleasant, has its own shopping district and Rees Jones and Tom Fazio golf courses.

According to Daniel Island Real Estate, sales during the typically slow months of January and February have been near explosive, with a year-over-year increase of 11 to 17 in the number of transactions, an average sales price of $570,000 compared with $360,000 during the same period in 2012, and a total sales volume that grew from $3.9 to $10.3 million. Sellers are receiving 95% of their asking prices this year compared with 85% last year, and the average number of days a home is spending on the market is just 94, compared with 250 days during the same period last year. The drop in the number of homes listed for sale from 109 to 82 is further evidence that the tide in the Low Country has turned from a buyer’s to a seller’s market. Further increases in the value of properties on Daniel Island may not be far behind. 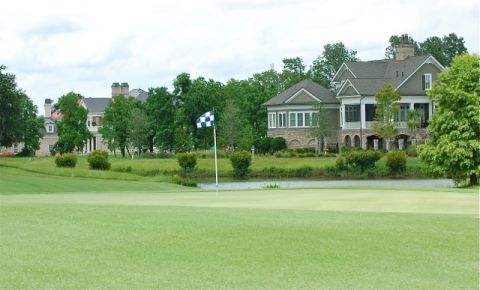 Some of the larger homes on Daniel Island are along the perimeter of the Tom Fazio golf course.  Golf club membership includes another 18, by Rees Jones.  Real estate sales in the enclave are up signficantly in the first two months this year.

Daniel Island is not an isolated case, as we are on the receiving end of similar information from other top golf communities in the southeast. If you have been considering a search for a southern golf home, we would be pleased to help you identify the golf communities that best match your requirements. A good start is to fill out our online Golf Home Survey. Submit your responses and we will respond in a couple of days with some suggestions of golf communities that suit your criteria. We treat all information in the strictest confidence and will never share it without your permission.

Late last year we worked with a couple that toured a piece of property they liked at a price that wasn’t going to last long, and they bought it, within six weeks of contacting us. According to the Realtor who worked with them, the market value of their property increased shortly after they purchased it.

More in this category: « Bull Run: Housing experts predict double-digit rise in Florida prices for 2013 The traps golf home seekers fall into, plus some million-dollar babies »
back to top
Back to Top