We tend to forget that there was a recession in the early 1990s, when people stopped buying new homes and gave up their golf club memberships as anxiety about the economy rose in tandem with corporate layoff rates and job security fears.  Sound familiar?  We forget as well that, back then, some pundits preached a scenario for the golf industry that mimics the doom and gloom we hear today.  But in any crisis, the shrewdest businesspeople always see opportunity where others smell fear.  In the 1990s, ClubCorp followed this model and, today, it is the second largest operator in the business (after Troon Golf) and can boast an all-encompassing roster of 130 golf courses.  That gives ClubCorp tremendous leverage in offering its members nationwide significant options for playing a wide variety of layouts.

The Golf and Country Club division of Toll Brothers may be the latest bad economy’s example of a golf course operator with a gutsy strategy.  Despite the lingering effects of the recession on homebuilding and golf course operations, the nationwide builder announced late last year that it was expanding its customary emphasis on buying and operating country clubs only inside the gates of Toll Brothers built golf communities.  With confidence borne of two decades running a handful of those well-regarded community golf clubs, and with a mandate from the Toll family to expand its golf portfolio, Toll Golf is unabashedly in the market for bargain-priced clubs. 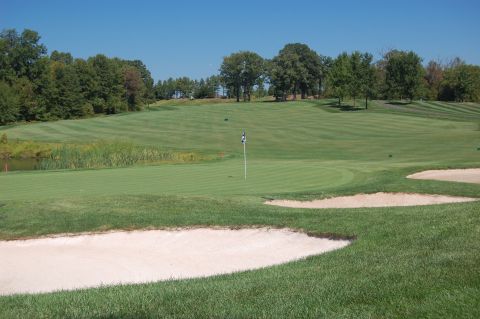 The first hole at Toll's Dominion Valley golf course features a dogleg right, a rolling fairway and a well-protected green, enough to get the attention of even the most casual golfer from the gitgo.

“Opportunities to own and manage country clubs in non-Toll communities that are facing financial trouble continuously present themselves,” Toll Golf President Dave Richey said last September in announcing the company’s more aggressive stance.  Although Toll Brothers communities surround a total of 22 golf courses, Toll Golf only owns and manages 11 of them; the rest were either turned over to members earlier or were developed by companies not affiliated with Toll.

Toll Golf has many clubs choose among, given the current tumult in the golf course industry; one of its earliest acquisitions was quite a coup, a highly rated Tom Fazio course at Hasentree, a community north of Raleigh, NC, whose bankruptcy opened the door for a bargain-basement purchase by Toll Brothers (hundreds of undeveloped lots were included).  Last year, Toll Golf also picked up Parkland, a Greg Norman designed golf course in a Florida community, after Toll Brothers bought the land and the club. 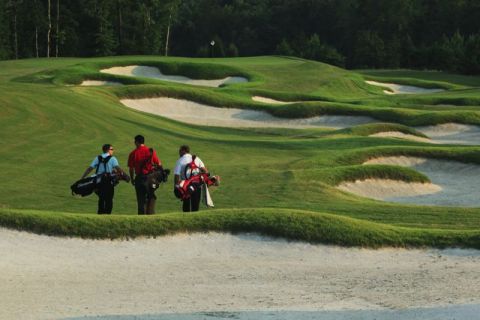 Members of Hasentree and its Tom Fazio golf course (above) gain full privileges at the nearby Brier's Creek club (Arnold Palmer) for just $100 additional per month.  Walking is permitted at Hasentree at all times.

There is nothing coy about the Toll Golf strategy.  First, the more courses Toll can make available to its existing golf members, the more valuable the memberships will be.  Potential members will notice the extra-course options as well, and the bet is they should be more willing to pay initiation fees that begin at $5,500 at Dominion Valley Club in Virginia and reach $102,000 at Frenchman’s Reserve, the Toll golf community in Palm Beach Gardens, FL.  I visited Dominion Valley and played the Palmer course there; you can read my review by clicking here.

The second reality that gives Toll confidence in its strategy is, well,

Golf operators like Toll are coming to justify membership fees by adding multiple golf course playing options for their members.
its confidence in its operational model; Toll Golf Senior Vice President Mitchell Laskowitz says his organization has picked up a number of underperforming golf clubs in the past and turned them around.  Laskowitz worked for ClubCorp for a number of years.  Third, although Toll Golf and the Toll real estate side of the house are “totally separate,” according to Laskowitz, the golf side understands it can help sell property by offering a comprehensive roster of efficiently run country club amenities.  Toll appears to understand that homebuyers are looking to get more for less from their memberships than in prior years, and more golf for the same fee appeals to those buyers who have the resources for a country club membership.

And finally, some sale prices for nice golf clubs that have hit the financial skids are just too tough to pass up.  Mitchell Laskowitz says that, although all current Toll golf clubs are private, Toll Golf is looking as well at semi-private courses that are sharply priced.  And, he says, “we would even consider re-selling it [at a profit] after we turn it around,” rather than keeping it in the Toll portfolio.

Toll Brothers purchased Hasentree for a reported $23 million, a deep discount to the $40 million SunTrust bank had loaned the original developers.  A little over a half-hour drive from Raleigh, Hasentree is defined by Toll as a “lifestyle” community, which means most of what a family needs in the way of recreation and other activities is inside the gates.  After Toll Brothers bought the 800-acre community, they reduced prices on new homes to match market realities.  Home packages once priced at $1 million and higher now start in the mid hundreds of thousands.  The initiation fee at the Hasentree Country Club is today a relatively modest $10,000, down from a high of $30,000 before Toll took over. 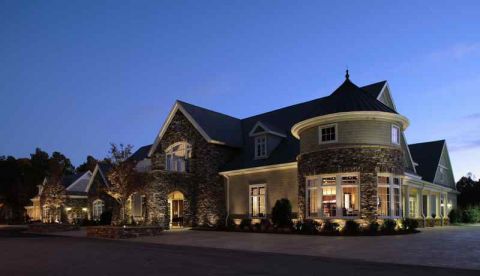 Toll Brothers was able to purchase Hasentree, near Raleigh, for pennies on the dollar.  The majestic clubhouse as well as a well-reviewed Tom Fazio golf course was there waiting.

With the acquisition of Hasentree, Toll Golf has added an extra benefit for its members at its nearby Brier Creek golf community, a combined membership for the two clubs. For $100 extra in dues each month (for a total of $485), members of either club can add full privileges at the other.  This echoes a trend we are seeing throughout the southeastern U.S.; multi-course privileges are becoming one of the few ways to attract a dwindling number of members willing to pony up hundreds of dollars each month.

Toll Golf is just one of many such organizations offering these multi-course membership plans regionally and nationally.  Besides the aforementioned ClubCorp, McConnell Golf Group in recent years has purchased seven highly rated private clubs in the Carolinas, charging anywhere from $10,000 to $26,000 in joining fees.  The portfolio includes two Donald Ross designed courses, Raleigh Country Club and Sedgefield in Greensboro, the latter McConnell’s most recent purchase.  In the Atlanta area, Canongate Golf offers its members an opportunity to join one of its 23 clubs and have privileges at some or most of the rest (depending on the level of membership purchased).  Of course, we have written much about The Cliffs Communities in the Carolinas where a $100,000 initiation fee will buy a property owner access to a half dozen excellent golf courses within about an hour of each other, with two more promised -– a Gary Player layout that could open later this year, and the much talked about Tiger Woods routing at High Carolina.  When the Tiger Woods course will be ready for play is anyone’s guess as The Cliffs sorts out its financial difficulties.  Who knows?

Perhaps at some point, Toll Golf or another golf course operator will add Tiger Woods’ first U.S. design to their own portfolios.

If you would like more information about Toll Brothers communities and its rapidly evolving golf program, please contact me.

More in this category: « Don’t Fence Me In: Trump erects barrier on Scot’s property, sticks him with half the bill The Twain Meets: June issue of Home On The Course publishes next week »
back to top
Back to Top