New York Times columnist Paul Sullivan has written a comprehensive article in the “paper of record” about Tiger Woods’ design business.  There isn’t much new in the article; the golf star’s three international projects are stalled, to put it mildly, and one Dubai golf official goes so far as to say the Woods project there is “as good as dead and buried.  (Desert sand is beginning to blow across and bury the six completed holes.)  Closer to home, Cliffs Communities developer Jim

Desert sand is starting to take over the partial Tiger Woods layout in Dubai.
Anthony, who rolled multiple dice that Woods’ name would be enough to sell scores of $1 million lots at High Carolina, remains consistent in his support of the fallen star.  “I think it is very minimally Tiger,” Anthony said in the article about the dearth of property sales at High Carolina.  The group of residents who loaned Anthony $64 million to complete the amenities across the Cliffs’ string of communities insisted that the Gary Player course at Mountain Park be finished first.  The residents loaned Anthony enough to complete the course but, under the lending agreement, they have the right to put the breaks on construction if land sales do not hit certain benchmarks.  They have, for the moment, exercised that prerogative.

The Times article indicates that Anthony is scrambling for additional financing for the High Carolina golf course, which may be a mistaken impression on the part of the writer since High Carolina was figured into the $64 million loan.

You can read the NY Times article by clicking here.  If you cannot get access to it, contact me and I will forward a copy.

Where the job growth is

According to Local Market Monitor, which publishes economic data pegged to, you guessed it, local markets, the southern U.S. markets with the strongest job growth include Raleigh, Washington, D.C., Nashville, Dallas and Houston.  Of course, job growth logically helps prop up home values and, the Monitor’s latest summary says, “Not surprisingly, home prices have bottomed out in the markets with strong job growth, with the

Sugarloaf Mountain is a terrific Coore/Crenshaw layout, but its condition has been affected by surrounding problems.
large exception of Orlando, and we expect modest price increases in the next year.”  I was in Orlando recently and played golf at the nearby Sugarloaf Mountain, the only Bill Coore and Ben Crenshaw design in the state of Florida.  It is a wonderful layout with striking views down to Lake Apopka, and the course is surprisingly elevated for the Sunshine State.  Sadly, the surrounding real estate has not evolved and the golf course, currently managed by Hampton Golf, has suffered from a conditioning standpoint.  Reportedly, new buyers intend to inject some capital into the project.  Good luck.  Orlando, whose economy depends largely on the entertainment industry (Disney, Universal, Sea World) and convention business, is a bit like Las Vegas when it comes to home values.  (See my comments about Sugarloaf Mountain Golf Club by clicking here.)

Cities like San Jose, Honolulu, Bethesda and Pittsburgh should see home prices in the 2 to 4 percent range in the coming year, according to the Monitor.  Retirees in Pittsburgh who have been waiting for their homes to increase in value before moving south should stand at the ready.

The Local Market Monitor web site is at www.localmarketmonitor.com.  You can purchase individual market reports from the site or subscribe for full access to the 315 markets they cover.

Reynolds Rap:  Upscale community's owners may have to dig deep to keep amenities out of bank's hands

Our friend Toby Tobin, the hardworking Florida blogger, reports that Reynolds Plantation residents have been offered the community’s amenities for $44 million.  Paper ballots were sent to all 3,600 owners in the last week.  Toby’s comprehensive article goes on to quote at length local bloggers who have been following the Reynolds story.  One conclusion is

Markets abhor uncertainty; Reynolds woes could turn into a buying opportunity.
that Bank of America, which holds the paper on Reynolds Plantation, could own the community’s amenities by May if the residents do not vote to buy them, including Reynolds’ six highly regarded golf courses (plus an in-development course designed by Pete Dye).  The situation at Reynolds has deteriorated quickly in the wake of a letter from the owners to residents just last month indicating their financial woes.

Couples who have been considering a purchase at Reynolds should keep an eye on the residents’ vote and further news about the community.  Of course, all markets abhor uncertainty; the acquisition of the amenities by Bank of America through foreclosure could very well cause a drop in property prices at Reynolds.  But if BofA sells the amenities to a respected operator, the long-term consequences could be minimal and panic by some Reynolds property owners could turn into a buying opportunity.  Stay tuned.

You can read Toby’s coverage at www.gotoby.com.

Golf play is picking up in the Myrtle Beach area, and that is good news for the recession-affected “supermarket” of golf.  A representative of the Waccamaw Golf Trail, a string of a dozen golf courses at the southern end of the Grand Strand, reported recently to the Georgetown County Tourism Management Commission that, “bookings are through the roof.”  The trail and commission have partnered to promote the Trail through a series of ads on the Golf Channel and its web site.  The campaign, according to the local Coastal Observer newspaper, has generated 130,000 online requests for green fee quotes and has helped build the Trail’s database to more than 90,000 contacts. 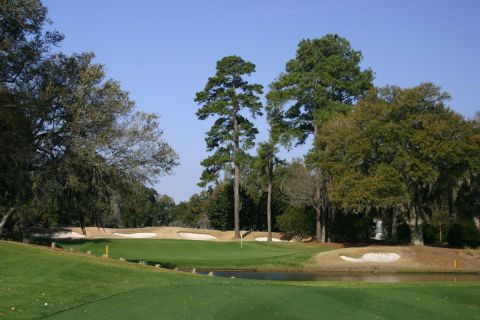 Caledonia Golf & Fish Club is one of a dozen fine golf courses that are part of the Waccamaw Golf Trail at the south end of Myrtle Beach.

I can report personally that rounds are up significantly at Pawleys Plantation, one of the Waccamaw Trail golf courses; the famed Caledonia Golf & Fish Club, True Blue and Founders Club are also members of the Trail.  Two weeks ago, I couldn’t book a normal tee time at Pawleys Plantation two days before I wanted to play; March in the Myrtle Beach area is popular with Canadian golfers, and the only tee time available was 4 p.m., eh?   Last year, Myrtle Beach National purchased the Jack Nicklaus Signature golf course from the original owner and is promoting it as the anchor of its own portfolio of 14 courses on the Grand Strand.

The Myrtle Beach Golf Passport offers discounted green fees on most area courses for just $39 annually.
looking for a vacation home within minutes of the beach and close by dozens of good-to-excellent golf courses can buy-in for well under $150,000 for a two-bedroom, two-bath condo.  For just $39 annually, second homeowners who purchase the Myrtle Beach Golf Passport can play discounted golf year round and invite up to three friends or family members to play at the same discounted rate.  The Passport pays for itself on the first use.

In another bit of good news for the South Strand, Southwest Airlines has begun flights to Charleston International Airport, about an hour from Pawleys Island.  Hopefully, this will put pressure on U.S. Airways, Delta and other carriers who serve Myrtle Beach International Airport to massage their prices for trips to and from the northeast and midwest.  Prices to fly into Myrtle Beach from northern cities are generally higher than to Charleston.

Myrtle Beach is utterly reliant on golf for its economic wellbeing.  It is good to see things are starting to break in the Grand Strand’s direction.  Potential homebuyers should take note.

More in this category: « Rounds played in February Fortune magazine says real estate is back »
back to top
Back to Top