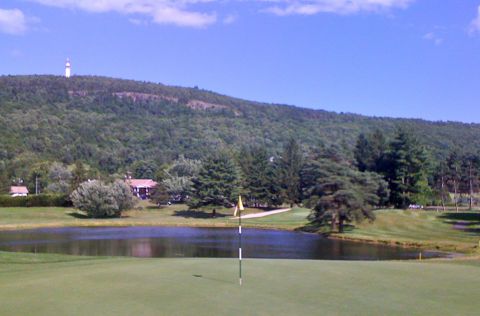 Tower Ridge in Simsbury, CT, is one of those country clubs whose best days are behind it, a former private club whose quirky but always smartly conditioned Geoffrey Cornish layout attracted a small but fiercely dedicated group of members.  But faced with a declining economy and too much local competition from other private clubs, as well as the threat that half its 18 holes would be closed and turned over to a new housing development, Tower Ridge could not staunch the outflow of members.  As so many other clubs have done to survive, the club opened its course to outside play a few years ago.

My son and I have played Tower Ridge many times, as both a private and public golf course, and a return the other day was both nostalgic and heartening.  The course was not crowded on a Monday afternoon, but there was enough traffic to give a positive little jolt to those pulling for the course’s survival (and a number of people showed up after work, as we were leaving).

Conditions had not slackened because of the economy and budget cuts; indeed, the greens were in mostly mid-season form, although they could stand a slightly tighter cut.  The vistas from the top of the course out to the Farmington Valley are as we remembered them, a panorama of green interrupted only by the occasional white church steeple and a few other landmarks.

More in this category: « Golf club wastes dollars in national ad On the road again »
back to top
Back to Top