Numbers vs logic in the housing reports
Friday, August 21, 2009

Numbers vs logic in the housing reports

Home sales defied gravity in the run-up to the crash of 2006/07.  Now it seems they are defying logic.  Or are they?
On the face of it, the home sales report today by the National Association of Realtors (NAR) that home sales have increased for the fourth month in a row seems at odds with what we know statistically about unemployment figures (not good news) and anecdotally about home prices -- that folks suffering double-digit percentage losses in their home values are holding fast for higher-than-market prices.
Home prices are down more than 15% from July last year; the inventory of unsold homes is still high, at nearly 10%, and doesn't take into account all those who would love to put their homes on the market, a kind of phantom inventory; and now, we are starting to learn (but not, of course, from the NAR) that many middle-class homeowners with conventional loans, not sub-prime, are in payment distress because of job loss.  Oh, yes, and home prices are not increasing with sales (on the contrary).  Taken together, all those circumstances don't seem to square with the increase in home sales.

Some strength in numbers

But numbers don't lie.  (Although the NAR economists have been known to paint a deep rosy wash on their numbers, as in today's pronouncement by NAR Chief Economist Lawrence Yun that, "The housing market has decisively turned for the better.")  Sales of homes of the single-family and condo varieties increased in July virtually in every region.  And of special interest to those of us contemplating a move south, home sales in the southern U.S. were double those in the north (1.95 million vs. 900,000).  The only region in which sales were lower in July than the month prior was the West. 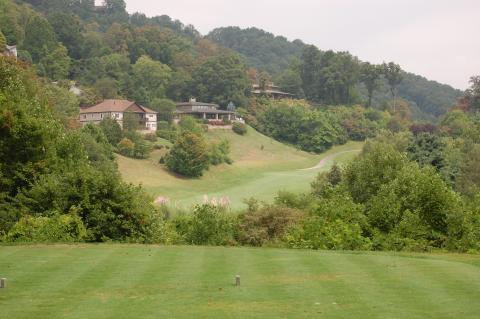 Homes in golf communities like Laurel Ridge near Waynesville, NC will start to see much more interest if the housing market is truly bottoming (or is perceived to be).

What does it all mean?  The bet here is that the U.S. housing market is devolving into three separate market segments -- low, middle and high (how is that for originality?) -- with less movement between them than in prior years because of tenuous job situations, less employee transfer, and general economic uncertainty.  Define "low" roughly as homes well under the median national price of $178,000, say $150,000; the middle from that point up to around $600,000 or so; and the high end from over $600K to Donald Trump territory.  The low end is attracting speculators because the prices are so low and first time buyers attracted by the $8,000 government stipend as well as by the American dream of home ownership (rumors of its death are greatly exaggerated).  But unemployment issues and strict lending rules, at least for a few years, will keep most low end homeowners from trading up into the middle range.

For those wealthy couples who buck the trend toward smaller homes, a growing inventory of unsold McMansions will well satisfy their needs, and at bargain prices.  My brother Bob sent me a note today about an oceanfront home in Hawaii that repeats stories I am reading about big homes.  This house is on more than 5 acres and sold for $1.5 million, many multiples less than it was worth just a few years ago.  I told Bob it would have made a nice family compound (snicker) if we had only known ahead of the auction.  The house was auctioned at a distress sale in behalf of the founder of McAfee software, who was worth well over $100 million just a few years ago but is essentially bankrupt now.  This is a tough time for rich people, and the market at the high end is showing it.
The healthiest activity will likely be in that middle group, spurred by Baby Boomers cashing in the equity in their primary homes and downsizing into smaller homes in more attractive climates.  Baby Boomers, who have always been inclined to act in their own self-interests, are not going to defer their plans much longer, especially if the housing market stabilizes.  If the sales numbers continue to trend in the upward direction, look for increasing waves of 50- and 60-somethings to start heading south (again), causing prices of properties there to stabilize if not increase.  And if companies start to hire and relocate employees again, making homes up north more attractive, that wave could become a tsunami.  Millions are poised to make the move if it seems economically feasible.

More in this category: « The expense of the rich: Some humor for a Sunday Let's make a deal: Private club pain may work to your advantage »
back to top
Back to Top